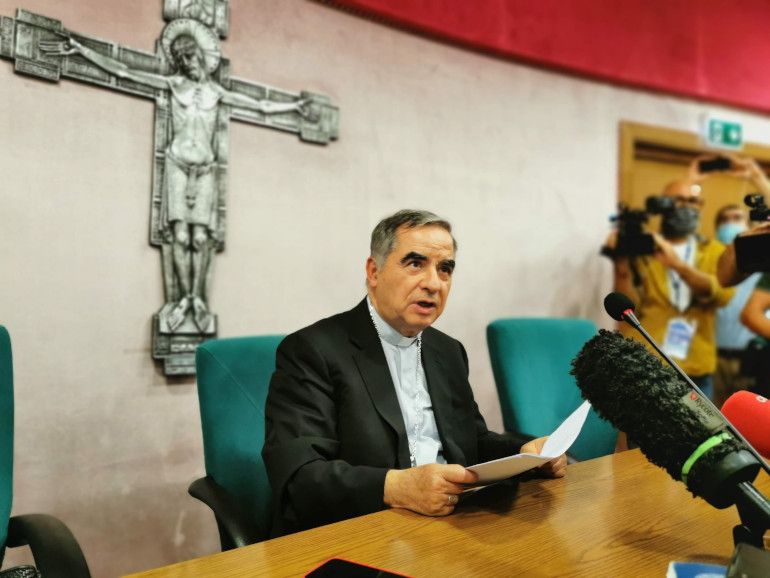 Cardinal Angelo Becciu speaks with journalists during a news conference in Rome Sept. 25, 2020, after he was asked by Pope Francis to resign as prefect of the Congregation for Saints' Causes and renounce the rights associated with being a cardinal. (CNS photo/Junno Arocho Esteves)

Rome — Italian police searched the offices of a Sardinian charity and diocese on June 9 on behalf of Vatican prosecutors who are investigating a once-powerful cardinal on alleged embezzlement charges.

Lawyers for Cardinal Angelo Becciu said in a statement that any and all documentation seized would only serve to "confirm the absolute correctness of the behavior" of Becciu, the charity and the diocese of Ozieri.

Pope Francis sacked Becciu as head of the Vatican’s saint-making office and stripped him of his rights and privileges as a cardinal in September, amid a crackdown on financial mismanagement and corruption in the Holy See.

Becciu told reporters that the pope had cited documentation the Vatican had received from Italy’s financial police indicating Becciu had embezzled some 100,000 euros ($122,000) in Holy See funds by donating the money to a charity run by his brother.

Becciu admitted he made the donation but denied any wrongdoing, saying the money was for the charity, not his brother. He noted that as chief of staff in the Vatican’s secretariat of state at the time, he managed the office’s vast asset portfolio, including making charitable donations.

The Spes charity belongs to the Sardinian diocese of Ozieri, in Becciu’s hometown, and its legal representative is his brother. As soon as Becciu was fired, the bishop of Ozieri, Corrado Melis, issued a statement saying the Holy See donation was received into the diocesan bank account but was never spent or forwarded to Spes pending other funding for a building project Spes was spearheading.

It remains unclear why the search of Spes and Ozieri only occurred June 9, eight months after Becciu was fired based on what Francis said was an Italian investigation into the donation.

The AdnKronos news agency cited a June 3 search warrant issued by Italian prosecutor Maria Teresa Gerace on behalf of the Vatican saying the documentation was considered "indispensable to substantiate the hypothesis of detraction of public funds for which Becciu is under investigation."

Becciu hasn’t been charged, and his case is one of several that have called into question the tactics of Vatican prosecutors. Earlier June 9, the prosecutors were criticized by the Council of Europe’s Moneyval evaluators for, among other things, having conducted an aggressive raid on the Vatican’s financial intelligence unit in 2019 in ways that violated confidentiality agreements with other countries.