by Thomas Reese
Accountability
Opinion
This article appears in the Synod on the Youth 2018 feature series. View the full series. 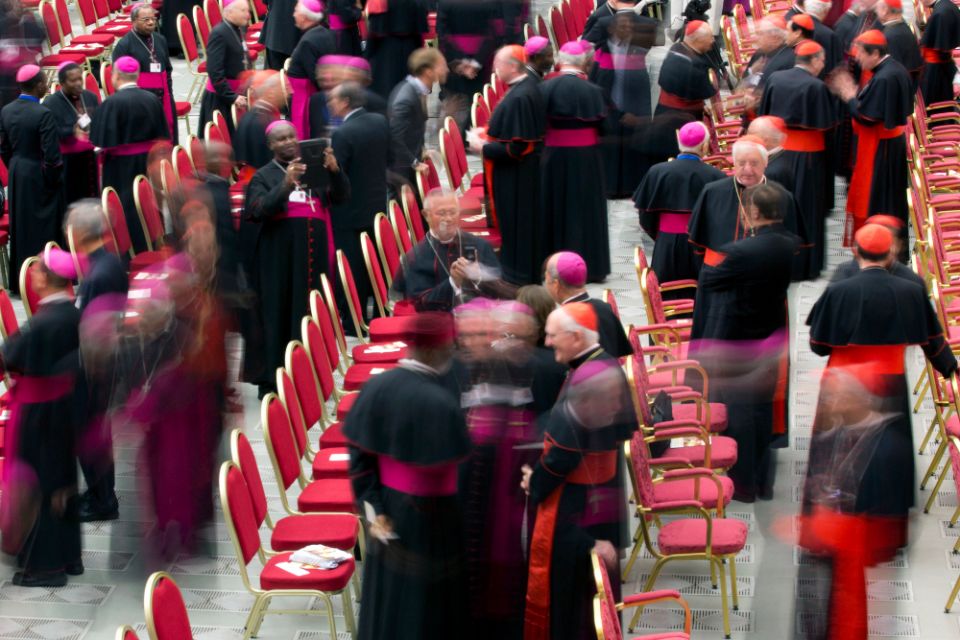 Cardinals and bishops arrive in the Paul VI Hall at the Vatican for a meeting marking the 50th anniversary of the creation of the Synod of Bishops, on Oct. 17, 2015. (AP/Alessandra Tarantino)

The future of the Catholic Church is with the young, which is why Pope Francis has called bishops from all over the world to meet in Rome Oct. 3-28 for a synod on young people. If the church cannot attract and keep young people, it has no future.

This is the 15th general synod since Pope Paul VI called the first one in 1967 as a way to get advice from bishops. Earlier synods have dealt with topics like the family, priesthood, the laity, evangelization, the Eucharist, religious life, and justice and peace. The process involves speeches and small group discussions and usually concludes with nonbinding recommendations.

The church's future, especially in the developed world, does not look bright. In the United States, great numbers of people are leaving the church and other religious institutions in their teens. Young people are turned off by scandals in the church, the patriarchal and homophobic attitudes of many in the clergy and the involvement of church leaders in conservative politics. They also find the church irrelevant to their lives and frankly boring.

There are at least four challenges that await the bishops attending the synod, whose official title is the 15th General Synod on Young People, Faith and Vocational Discernment.

First, the bishops need to acknowledge that they don't have a clue how to evangelize young people. Many young people say they are "spiritual" but not "religious." In other words, they are thirsty but don't like what the church is serving. The clergy needs to listen to the young before speaking to the young. And it needs to be a wide range of young people, not just those going to church.

During the papacies of John Paul II and Benedict XVI, there was a lot of talk about the "new evangelization," but for most bishops it was no more than the catechism of the Catholic Church with a smile. It was Pope Francis who made the new evangelization come alive with his stress on God's love, mercy and compassion and our need to respond to that love by loving our brothers and sisters.

Bishops and priests need to follow his example and not be afraid to think outside the box. Lectures will not do it. Young people want to be interactive and involved. 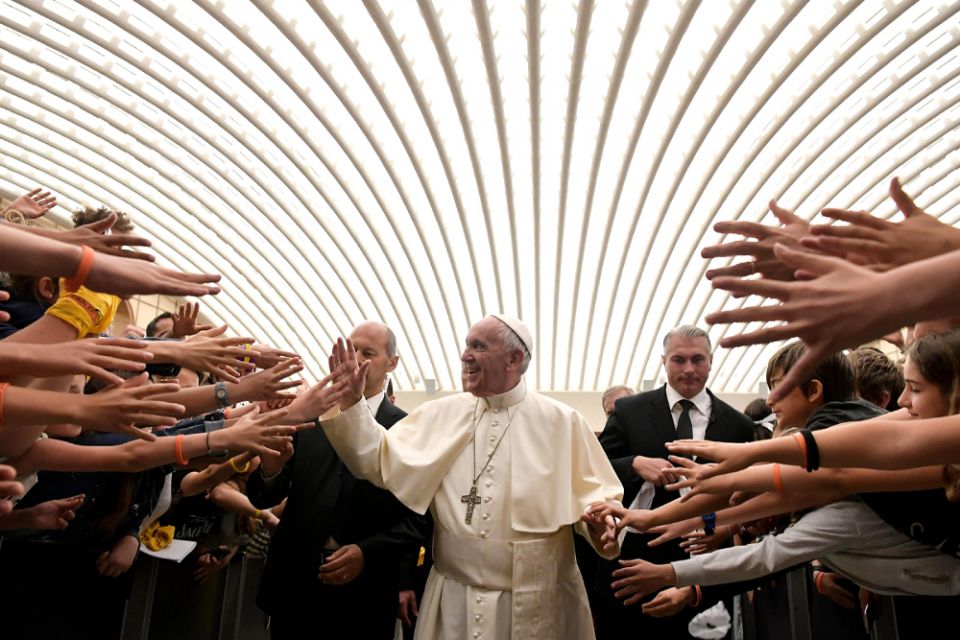 Young people greet Pope Francis during an audience for middle schools belonging to the Cavalieri group, which promotes Christian life for youth, in the Paul VI Hall at the Vatican on June 2, 2017. (L’ Osservatore Romano via AP)

The church also needs to learn how to make the Bible come alive for young people. Many of those who leave Catholicism for evangelical churches say they discovered the Bible there. The Catholic Church has the best Scripture scholars in the world, but their work has not impacted sermons or gotten ordinary Catholics to read the Bible.

Second, besides saying that they are spiritual but not religious, young people say that they want community. The irony is that combining spirituality and community is what religion is supposed to be about, but for young people the church is a bureaucratic institution, not a community. They find parishes stifling, judgmental and unwelcoming. Young people must be welcomed and empowered to create their own small Christian communities. Some of these will undoubtedly be virtual communities.

A significant number of young people, both men and women, would like to take a leadership role in the church, but they find it incredible that the priesthood is closed to women and married men. To become less boring, the church needs new blood.

Third, the church also must be relevant to the needs of young people.

Young people today are sensitive to injustice and inequality. In fact, most young people in the world are poor, exploited and living in areas of conflict. The social justice message of the church will resonate with the young who want to challenge the status quo. The church must be a leader in the fight for justice and in the work of reconciliation.

In addition, these young people are concerned about the environment. They and their children will have to live with the consequences of global warming. Francis has pointed the way, but he cannot do it alone.

Finally, and not least, the bishops cannot ignore the clerical sex abuse crisis enveloping the church.

In the past, bishops and Vatican officials claimed this was a local problem in the United States. Then it became an "English-speaking" problem as Ireland and Australia blew up. Then it became a Western problem as Europe was engulfed. Now it is exploding in Latin America. Asia and Africa will be next.

It is tragic that bishops in other countries do not learn from the mistakes made by the American bishops.

The sex abuse crisis is a worldwide problem that deserves the attention of the entire church. Although the pope has called a special meeting in February to deal with this crisis, the problem cannot be ignored by the synod.

At a minimum, the synod needs to recognize the problem, support zero tolerance for any priest who abuses a minor and call for the punishment of any bishop who does not remove abusive priests from ministry. There should be no place for sexual predators in the priesthood, including those who prey on seminarians and nuns.

The church has a message relevant to young people; it is just not getting through. Whether the bishops will rise to these challenges remains to be seen.

The synod is composed of around 300 bishops elected from episcopal conferences around the world plus delegates appointed by the pope. 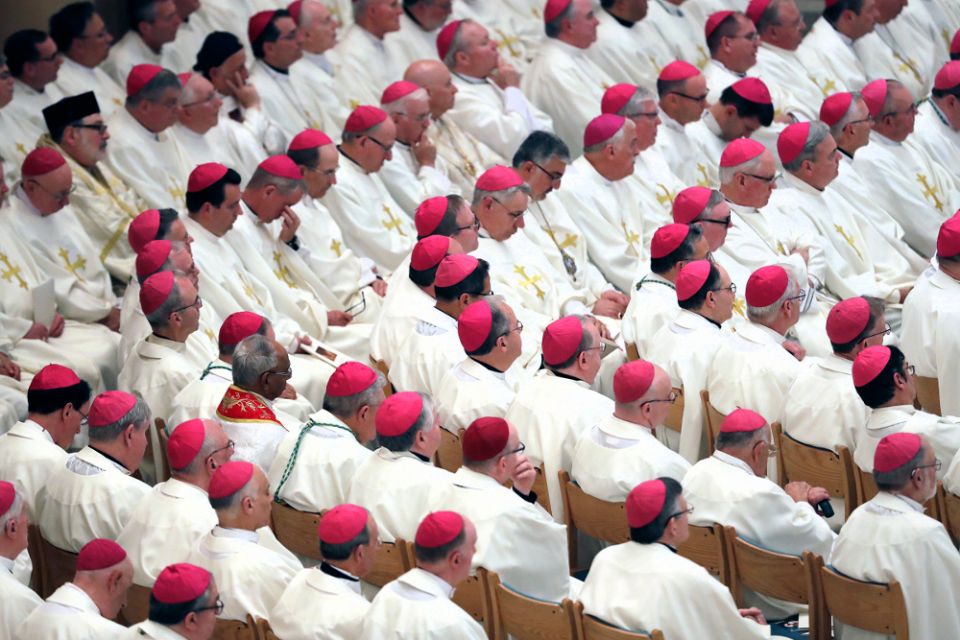 Bishops listen as Archbishop Wilton Gregory speaks during a Mass to repent clergy sexual abuse and to pray for molestation victims, on June 14, 2017, in Indianapolis. (AP/Darron Cummings)

Those elected from the U.S. Conference of Catholic Bishops are:

The Americans appointed by Francis are Cardinals Blase Cupich of Chicago and Joseph Tobin of Newark, New Jersey. Tobin has since asked to be excused from the meeting so he could deal with the fallout from the sexual abuse crisis in his archdiocese.

* The original version has been clarified that Chaput is an automatic member of the synod and did not need to be elected.

A version of this story appeared in the Oct 19-Nov 1, 2018 print issue under the headline: Four challenges for the youth synod .

Column | Four challenges for the bishops at synod on young people