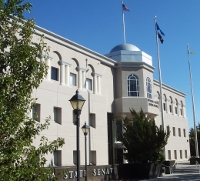 The outside of the Nevada State Senate building (Photo taken by Dave Parker, licensed for use under a Creative Commons license)

UPDATE, July 19: Nevada's two bishops first became aware that the executive director of the Nevada Catholic Conference pleaded guilty to a federal felony charge after someone called the Las Vegas diocese asking about the man's legal status about three weeks ago, the chancellor of the Reno diocese said Thursday.

"That seems to be the first information that we had to the fact that this was out there," said Holy Rosary Br. Matthew Cunningham. After the call three weeks ago, he said, Las Vegas Bishop Joseph Pepe and Reno Bishop Randolph Calvo began engaging in conversation with John Cracchiolo on the matter and "how it needed to be dealt with."

In the middle of the conversations with the bishops, Cracchiolo resigned from the executive director position in an email July 11.

Cunningham said the information on Cracchiolo's past hadn't come up before because the lobbyist wasn't convicted of his felony until 2009, after he had started work with the conference, so "it did not surface in the vetting process."

"As I understand the information that I have had ... whatever decision was made was not made until 2009," Cunningham said. "John was already working for the diocese in 2007. Whatever that decision was came two years later. And, for whatever reason, it never surfaced here until three weeks ago."

While Cracchiolo did not respond to calls for comment to NCR on this story, the Reno Gazette-Journal reported Thursday that the lobbyist said in a phone call that the matter was "too painful for us as a family" before declining to comment further.

Cunningham said he was not involved in the conversations regarding Cracchiolo's legal status until July 13, when he returned from a retreat.

The person responsible for representing the concerns of Nevada Catholics at the state's capital has resigned following NCR inquiries about his pleading guilty to a charge of obstruction of justice, a federal felony, and serving three years' probation.

John Cracchiolo, the executive director of the Nevada Catholic Conference, resigned his position at the conference "sometime in the last few days," the chancellor of the Reno diocese said Friday.

In the last week, NCR asked the Reno and Las Vegas dioceses, Nevada's only two dioceses, about Cracchiolo's role at the conference after learning he had accepted a federal plea deal in 2009 stemming from charges that he was part of a plan to defraud investors during his time as the chief financial officer at a publicly traded medical device company in California.

According to court documents, Cracchiolo remains on probation under the terms of the deal until Saturday and is not allowed to work "in any management position" at any publicly held corporation.

Following the deal, his license as a certified public accountant and his ability to identify himself as an accountant before the Securities and Exchange Commission were also revoked, government records show.

Holy Rosary Br. Matthew Cunningham, the chancellor of the Reno diocese who also serves as its spokesperson, said he had been out of the office this week and was made aware on his return Friday that Cracchiolo had resigned from the conference for "personal reasons."

"He has just resigned from the office of director of the Nevada Catholic Conference," Cunningham said Friday. "I have no other information."

Cunningham said he did not know Cracchiolo's salary or the budget of the conference.

A page still accessible on the website of the Las Vegas diocese advertises that Cracchiolo's position was first available in October 2006. Public records indicate that Cracchiolo first officially registered as a lobbyist in the state of Nevada for the conference in 2007 and remains its sole registered lobbyist.

Calls to Cracchiolo throughout the week were not returned. A spokesperson for the Las Vegas diocese, Rachel Wilkinson, said Thursday she was not able to comment on whether the diocese had been aware of Cracchiolo's conviction.

While information regarding the plea deal is publicly accessible in a bevy of court documents, it seems to have gathered only minimal news coverage at the time in short reports in local newspapers.

The Nevada Catholic Conference does not maintain a website, and neither the Reno nor Las Vegas diocesan websites have pages explaining the conference's work.

A 2011 brochure from the Reno diocese, which is accessible online, describes the conference as giving "input to the Nevada Legislature from the Catholic perspective representing the bishops from both Reno and Las Vegas."

"This office is the Catholic presence to the Nevada Legislature," continues the brochure, which describes the programs that are given money from the diocese's annual financial appeal. "The executive Director also represents the Catholic Church in other statewide commissions and organizations."

Cracchiolo's plea deal stems from charges brought by the SEC in August 2006 against him and another executive at Endocare, Inc., a medical devices company based in Irvine, Calif., whose stock had been traded on the NASDAQ stock market.

According to the original statement from the SEC, Cracchiolo and Paul Mikus were accused of "orchestrating a financial fraud perpetrated on the investing public in 2001 and 2002" while Mikus served as the company's chief executive officer and Cracchiolo was its chief financial officer and chief operating officer.

According to filings in the U.S. District Court for the Central District of California, Cracchiolo decided to assist prosecutors "on the eve of trial" by giving them information about his involvement in the scheme, which the SEC alleged had led to, among other things, Endocare inflating its net revenue "by at least 16 percent" for 2001, 17 percent for the first quarter of 2002, and 33 percent for the second quarter of 2002.

According to filings, Mikus also eventually agreed to a plea deal and is serving a 60-month jail sentence. He was levied a fine of $100,000.

While the court did not order Cracchiolo to pay any significant fines in his criminal case, as a result of a separate civil suit brought by the SEC before the court and finalized in January 2009, he was ordered to pay $60,715 in disgorgement of ill-gotten gains, $10,378 in prejudgment interest, and a $50,000 penalty.

The documents finalizing Cracchiolo's plea deal in the criminal case and outlining his probation sentence were filed with the court on July 14, 2009.

Cunningham said Reno Bishop Randolph Calvo was unavailable to comment on the matter as he is on vacation until August.

Wilkinson, who serves as a contracted spokesperson for the Las Vegas diocese through a Las Vegas public relations firm, said Thursday she had "not heard anything from the diocese" after inquiries to them on the matter.

"But I'm sure there would have been whatever they felt was necessary regarding interviewing the people he listed in his file for giving him recommendations," Cunningham said. "We would have followed a vetting procedure of some kind. That's all I know."

Cunningham also said Cracchiolo did not maintain an office at either diocese and worked from home.

During his work at the conference, Cunningham said Cracchiolo would have worked with the Nevada legislature and would have "represented the bishops."

"If [the legislators] were asking for information, he could research that and provide it for them -- what the church's stand or teachings were on some of the various items that came up in the legislature," Cunningham said. "That would be the normal thing that would have been his role."

While the conference's programs and objectives are not publicly available without the presence of a website, several references to the group's efforts at the state legislature appear on the websites of other organizations.

In one reference, made in a May 2011 letter posted on the website of the Lutheran Advocacy Nevada group, an advocate for a another advocacy group writes he and Cracchiolo had lobbied the state legislature together several times that month to address legislation regarding the treatment of released felons.

In that letter, Larry Struve, an advocate for the Religious Alliance in Nevada, says he and Cracchiolo lobbied regarding two bills in the state assembly in particular, one that would have given released felons the right to vote and another that would have waived the normal fees for issuing identification documents for such felons.

According to a 2011 brochure from the Religious Alliance, publicly accessible online, Cracchiolo also serves as a board representative for that organization, representing Catholics in northern Nevada.

A 2011 brochure from the Reno diocese that delineates the allocation of funds from the diocese's annual appeal, also accessible online, says the conference was to receive an allocation that year of $17,750 out of the $1.37 million total the diocese was expected to raise.