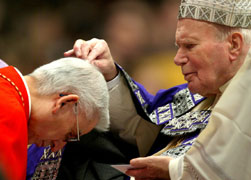 ROME -- Late Thursday evening Rome time, the Vatican released a statement in response to media reports in France about a September 2001 letter from Colombian Cardinal Dario Castrillón Hoyos, at the time the prefect of the Vatican's Congregation for Clergy, congratulating a French bishop for not reporting an abuser priest to the police.

The letter, first published by the French Catholic publication Golias, is addressed to Bishop Pierre Pican of Bayeux-Lisieux, France, who was eventually sentenced to three months in prison for refusing to report a French priest, Fr. René Bissey, who was convicted in October 2000 for sexual abuse of eleven minor boys between 1989 and 1996.

Castrillón Hoyos’s letter congratulates Pican for not reporting Bissey to the French police and civil authorities. In the version published by Golias, it reads: “I rejoice to have a colleague in the episcopate who, in the eyes of history and all the others bishops of the world, preferred prison rather than denouncing one of his sons, a priest.”

“This document is another confirmation of how timely was the unification of the treatment of cases of sexual abuse of minors on the part of members of the clergy under the competence of the Congregation for the Doctrine of the Faith,” said the statement released by the Vatican press office.

For more on Castrillón Hoyos, see also: Crisis hangs over pope in Malta like volcanic ash

The Vatican statement said that move assured “a rigorous and coherent management [of the cases], as in fact happened with the documents approved by the pope [John Paul II] in 2001.”

Pope John Paul II approved a motu proprio, meaning an amendment to church law, that gave the Congregation for the Doctrine of the Faith under then-Cardinal Joseph Ratzinger responsibility for handling the sexual abuse crisis in May 2001. In a "layman's guide" to church procedures published earlier this week, the Vatican insisted that bishops are to cooperate with legal requirements about reporting allegations of abuse to the civil authorities.

Vatican analysts have long regarded Castrillon Hoyos as part of the “old guard” opposed to the reforms on sex abuse cases instituted by Ratzinger. In 2002, for example, Castrillón Hoyos led a Vatican press conference after the sexual abuse crisis erupted in the United States in which he suggested the crisis was largely an “American problem.”

It was also Castrillón Hoyos who was informally assigned the blame when Pope Benedict XVI lifted the excommunications of four traditionalist bishops, including one who is a Holocaust-denier, in 2009. That decision was prepared by a Vatican commission led at the time by Castrillón Hoyos.

Castrillón Hoyos stepped down as prefect of the Congregation for Clergy in 2006, and as head of the "Ecclesia Dei" Commission, dealing with traditionalist Catholics attached to the Latin Mass, in 2009.

Thursday night’s statement is a milestone from the Vatican. Rather than defending Castrillón Hoyos’s September 2001 letter, the statement essentially concedes that it’s an embarrassment, but insists that subsequent action by the Congregation for the Doctrine of the Faith under Ratzinger amounted to a repudiation of the attitude it implied.

In effect, this is the first time the Vatican has conceded that a senior Vatican official committed an error in judgment on the sexual abuse crisis -- albeit one later corrected by the future pope.

Accountability | Vatican disses one of its own on sex abuse

New ways of being church, in the public square and in the chanceries

Victims of Legionaries founder to get hearings

Pressing pope to accept his resignation, Cardinal Wuerl does the right thing