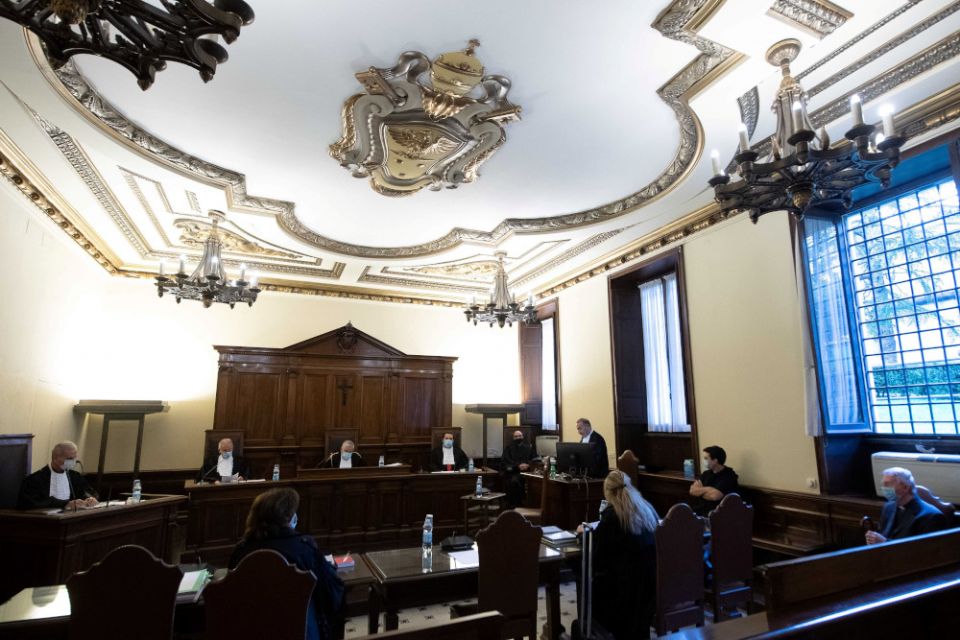 The Vatican City State criminal court is seen Oct. 14, 2020, during the opening of the trial of two Italian priests accused of sexual abuse at a minor seminary inside the Vatican. Fr. Gabriele Martinelli, 28, was accused of repeatedly sexually abusing a younger student at the seminary and Msgr. Enrico Radice, 71, former rector of the seminary, was accused of obstructing the investigation into the younger priest. (CNS photo/Vatican Media via Reuters)

Vatican City — The former rector of a minor seminary located in the Vatican denied knowing about the alleged sexual abuse of a student, but instead alleged that the victim and his friend, who claimed he witnessed the abuse, were motivated by money.

Msgr. Enrico Radice, the former rector of the St. Pius X Pre-Seminary, took the stand Nov. 19, the third day of the Vatican criminal trial against him and Fr. Gabriele Martinelli.

Martinelli, 28, is accused of abusing a younger student from 2007 to 2012. Although he and his alleged victim were under the age of 18 when the abuse allegedly began, the court accused him of continuing to abuse the younger student when Martinelli was already 20.

The accused priest was not present at the courtroom due to COVID-19 restrictions limiting movement in Lombardy, where he is currently residing.

The Vatican has accused Radice of hindering the investigation, including by lying to Vatican investigators in 2018 when he affirmed with absolute certainty that he had no knowledge of sexual acts ever taking place at the seminary while he was rector.

Also present in the Vatican courtroom was Fr. Angelo Magistrelli, the current rector of the seminary and superior general of the Opera Don Folci, which runs the minor seminary. During the trial's second session, Oct. 27, the Vatican criminal court approved a motion to charge the seminary and the religious institution with failing to protect the young students.

Emanuela Bellardini, the lawyer representing the minor seminary and the religious congregation, requested the trial be postponed since she had just received the case file earlier in the day.

Although Giuseppe Pignatone, president of the Vatican City State criminal court, denied her request, he reassured Bellardini that she would have ample time to prepare her case.

Taking the stand at the trial, Radice said that students at the minor seminary were "calm and peaceful" and that during his time as rector, "no one ever reported abuse to me, neither students, teachers, nor parents."

He also claimed that the alleged victim and his friend, known respectively as L.G. and K., were often seen together and that their accusations were motivated by "economic interests."

However, Pignatone questioned Radice's allegation, noting that the former rector was informed of the abuse by both Cardinal Angelo Comastri, vicar general of Vatican City State, and retired Bishop Diego Coletti of Como in 2013, four years before the accusations were made public.

Radice responded by saying that he had received a letter from the alleged victim's lawyer seeking a "benevolent solution" to the case. But when confronted with the fact that the letter was sent in 2018, the former rector admitted his allegation was "just my intuition."

He was also questioned regarding the alleged victim's testimony that at some time between 2009 and 2010, he informed Radice of the abuse. L.G. had said the rector responded "aggressively" to his allegations and claimed he was then "marginalized" at the seminary.

Radice denied that the victim ever spoke to him about the abuse. Yet, he subsequently said that L.G. told him about "problems" with Martinelli, but "he never spoke to me about sexual abuse."

"There were always tiffs and jokes like in all communities of young men," he said.

The former rector was also questioned about a letter from the bishop of Como he is accused of falsifying to advance Martinelli's ordination.

"At that time, I was assistant to the bishop. The idea came up that two seminarians could come to the seminary in Como for their last year," Radice said. "The bishop told me, 'Put it in writing.' I wrote the letter (and) he signed it. I did not make any forgeries. Then the letter was annulled by the bishop" when he changed his mind about sending Martinelli and the other student to Como.

The trial is set to resume Feb. 4, 2021, and Martinelli is expected to take the stand.