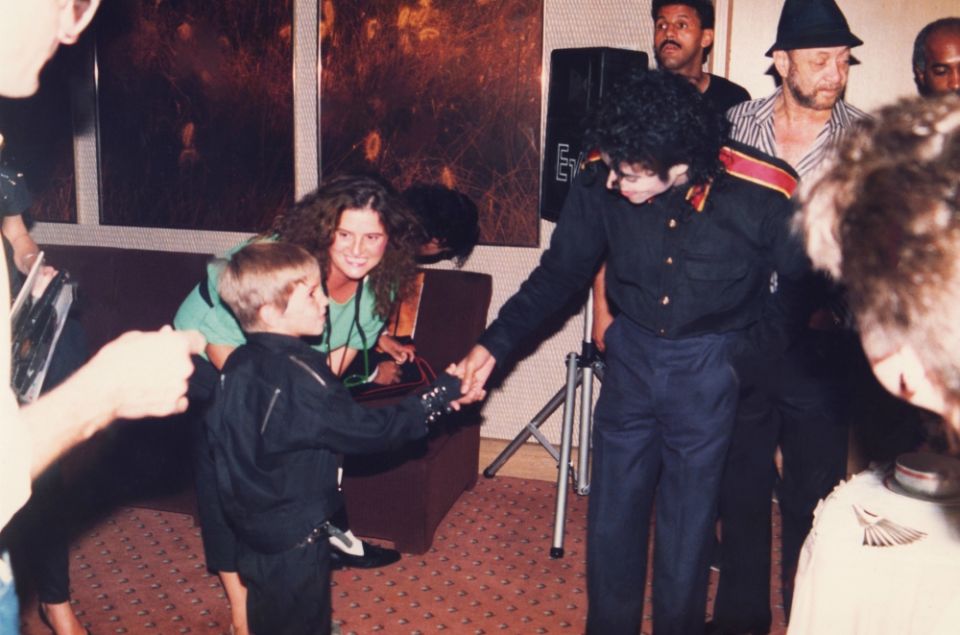 I was at my church when Michael Jackson died. It was the summer after I graduated from middle school, and I had just turned 14.

A couple of my friends and I were outside painting benches that were going in our parish's brand new children's chapel.

When I heard the news from my older brother — who told the rest of us after he found out via text — I responded in the most unequivocally un-Christian way possible (though maybe aptly for an early-teenage boy trying to get a reaction out of his buddies).

At that moment, all I knew about Jackson was what I had heard — he touched little boys. I didn't really know much at all about the so-called "King of Pop." I hadn't read anything about him or watched any documentaries about his life. I had not yet even listened to "Thriller" in its entirety. My only other clear childhood memory of Jackson was a video of him holding his 9-month-old baby, Blanket, over a balcony ledge.

Within a few minutes of my declaration, however, I felt guilty about celebrating a man's death. Within a month, I deeply regretted condemning the person who would become my new hero.

He died in the summer. I was out of school and had a lot of free time on my hands. MJ was everywhere that summer. You — I — couldn't escape him. I did not want to. Not one bit.

I was swept up in his music, his talent and his aura.

Hit after hit came blasting through the radio on my boombox. TV stations played his cinematic music videos on a loop. When his nearly three-hour nationally televised memorial service aired, I was glued to the screen for its entirety, and within weeks the "rumors" about Jackson and young boys faded to the background.

The beats. Those moves. His red jackets. It all just spoke to me. At 14, I wanted something to be passionate about. Mastering the moonwalk became that passion.

In the 10 years since his death, it feels like Michael Jackson was involved in so many big moments in my life. The homecoming MJ dance-off I competed in during my freshmen year of high school, the dance floor at my sister's wedding, prom, multiple family road trips, the dance floor at my other sister's wedding. Michael was there for it all, even when I got to college. One of my favorite courses was an African-American studies class on Jackson.

Even after death, Jackson was so transcendent, so iconic, that it was impossible to separate the man from his music. Whenever I heard that opening baseline of "Billie Jean," my mind immediately went to Michael coolly lighting up those run-down city sidewalks or sliding across the stage at "Motown 25." Suddenly, magically, I was right there with him.

It was the same with all of his classic hits. They struck me at my core and called me to move. Michael Jackson made it cool for a teenage boy to want to dance. OK, maybe it wasn't actually cool, but it sure felt that way.

Before "Leaving Neverland" premiered this month on HBO, we knew Michael was troubled. Now, we see he was a criminal.

There has been no shortage of think pieces in the weeks since the documentary aired on HBO. Like all of the stories we have learned throughout the #MeToo movement, the graphic stories of victims James Safechuck and Wade Robson in "Leaving Neverland" have pushed society once again to wrestle with our engagement with incredible and influential art produced by problematic, sinister artists. More sins of more artists will undoubtedly surface and we will continue to grapple with the question of whether art can be separated from the artist.

But I have another question, one that, I think, is similarly relevant to the church. What do we do with the memories?

Looking forward, how we — I — deal with Michael Jackson seems simpler. Jackson's music is tainted. I can't listen to it anymore, and I don't want to. His songs, their lyrics, take on new meaning in light of what I now know. It feels impossible to imagine a world where I enjoy them as I once did.

Looking backward feels a lot trickier. Jackson came into my life at a point where self-discovery was the most important thing on my plate. His music taught me how to have fun and how to be confident in my own skin. He set an example to love and care for your neighbors and for the planet, to share your gifts and use your talents for others.

Had I never discovered Jackson, I may have never picked up a guitar or sung in the school choir — two hobbies I continue to this day.

Last week, news broke that retired Bishop Gordon Bennett was accused of sexual harassment. A Jesuit, Bennett worked at St. Ignatius Preparatory School in San Francisco when my father was a student there. Bennett conducted the school's senior choir and recruited my dad to join, leading to a life full of singing on the altar, on stage, with friends, to his children and, now, to three grandchildren.

It is painful for my dad to reconcile with these accusations against a man and mentor who was so formative in his life.

I'm sure things are similar for many Catholics who knew and loved priests accused of sexual misconduct. Victims struggle with this as well; "Leaving Neverland" makes that clear. Jackson, in fact, helped facilitate Robson's immigration to the United States and career path to become a superstar choreographer.

However, striking similarities exist in the way music fans and Catholics in the pews, elevating rock star and local priest beyond questioning, were manipulated. The parallels continue in the way priest and rock star abused trust and in the pain they inflicted on victims.

It has only been three weeks since I sat through "Leaving Neverland," but I suspect, like a lot of people, there may never be an easy way to reconcile my positive memories of Jackson and his music with the evil he committed. The same can be said for my relationship with the church — an institution that taught me love and introduced me to Jesus yet knowingly covered up abuse by its leaders. It now feels oddly fitting that my relationship with Jackson began at church.

I recommend you watch "Leaving Neverland." It will be difficult, but it is necessary. You will see up close how the "grooming" process works. Those lessons may protect children you know and care for somewhere down the road.

If you are struggling with your own relationship with the Catholic Church, it may also provide an opportunity to step back and reflect through a different lens. Maybe it will bring you the answers you have been searching for. Or maybe, if you're like me, it will raise even more questions. But I don't think those questions are a bad thing.

Perspective | Whether church or 'Neverland,' what do we do with the memories?