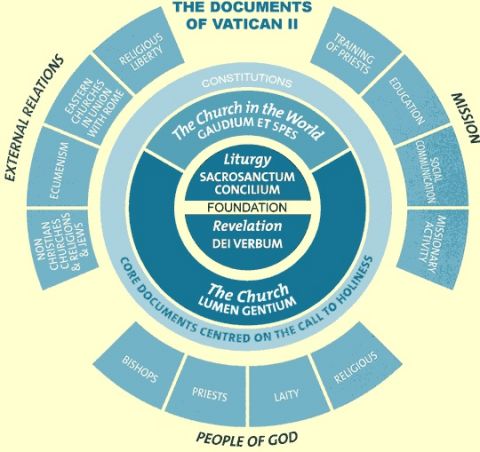 Perhaps the most critical threshold in the history of the church was the first century leap by the followers of Jesus from the mother church in Jerusalem into the gentile world. Some conservative Jewish Christians called Judaizers were insisting that gentile converts had to become practicing Jews before they could be Christians.  This meant adult circumcision and observing the entire Mosaic Law, including dietary rules.

In todays first reading, Peter is confronted by Judaizers for eating with uncircumcised people. At stake is whether faith in Jesus is sufficient for salvation and whether the church will be a sect of Rabbinic Judaism or a global church open to anyone.  Peter offers the story of his vision that there are no clean or unclean foods anymore.  He will later waffle on the issue by eating kosher with Jewish Christians but non-kosher with gentile Christians. Paul opposes him for his hypocrisy, and this leads to the first Council of Jerusalem (Acts 15).

The expansion of the church into the gentile world is also signaled in the fourth Gospel when Jesus says there are other sheep not of the original flock that he will shepherd. The Gospel is directed to the ends of the earth.  This early conflict was repeated in the conservative opposition to the Second Vatican Council (1962-1965) over whether church was a fortress of truth against the modern world or its partner in dialogue and a facilitator of needed reform and institutional change worldwide.

Pope Francis’ determination to advance the Council’s agenda after decades of official efforts to slow or halt many reforms in governance, liturgy and pastoral adaptations to modern problems has defined his papacy.  Knowing history is encouraging. The Holy Spirit is evident in the broader movements toward greater freedom and expansiveness as the nature of the Gospel.

Easter is an unstoppable movement toward more and more life, abundant life for everyone, not just an enclave or exclusive organization with all the answers. It is a slow process, a road with winding curves, switchbacks and temporary barriers. But we will go forward.  The cartoon image comes to mind. We are like snails riding on the backs of turtles, and even at this slow pace we can raise our arms with joy and our Easter cry can still be, “Alleluia --Wheeeeeeeeeeeeee.”

Pat is the former editor of our sister publication, Celebration, and he also served as NCR cartoonist. After retirement in 2016, Pat continues to contribute to NCR with his Francis comic strip and Pencil Preaching.  Conrtact him at patrickjmarrin@gmail.com