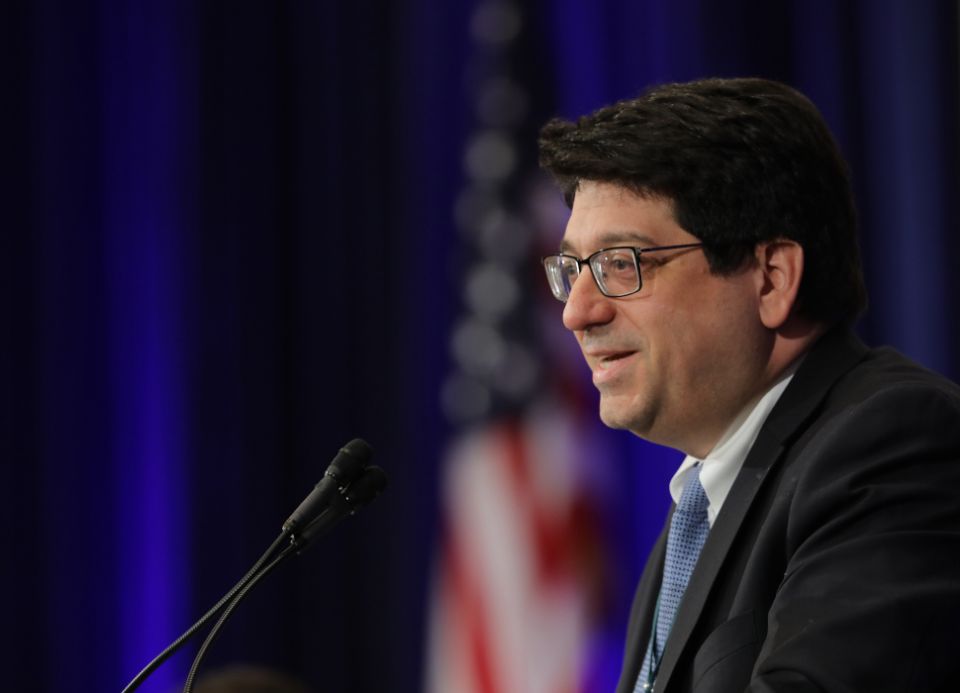 Anthony Picarello Jr., associate general secretary for policy and advocacy of the U.S. Conference of Catholic Bishops, listens to a question during the fall general assembly of the USCCB in Baltimore Nov. 13, 2019. (CNS/Bob Roller)

Updated Nov. 14, 2019 at 10:00 AM EST to correct spelling of company name and add location of its headquarters.

Baltimore — A third-party reporting system to field sexual misconduct allegations against bishops could be in place by the end of February, an official of the U.S. Conference of Catholic Bishops told the bishops during their fall general assembly in Baltimore.

The company awarded the contract for the system is working quickly to implement it so that it is in place well before the May 31, 2020, deadline set by Pope Francis, said Anthony Picarello, bishops' conference associate general secretary, in a Nov. 13 presentation to the bishops on the final day of their three-day meeting.

The precise date a toll-free hotline will be activated and links on diocesan and eparchial websites and the bishops' conference website will go live is going to depend on how quickly each diocese or eparchy can implement the program, Picarello said.

The bishops' conference official explained that the exact date the system will be ready will be communicated with each province, diocese and eparchy.

Bishop R. Daniel Conlon of Joliet, Illinois, asked how the system will filter complaints against clergy who, for example, may not exactly follow something as simple as genuflecting after the consecration of the bread and wine at Mass.

Picarello responded that complaints will be filtered so that only those concerns raised in Pope Francis' "motu proprio" "Vos Estis Lux Mundi" ("You are the light of the world") will be addressed through the new mechanism.

"The idea is we want to make sure this system is reserved for this specific, this high priority purpose," Picarello told the bishops.

Issued in May, the pope's document specifically addresses allegations of sexual misconduct and other accusations of actions or omissions intended to interfere with or avoid civil or church investigations of such misconduct by clergy.

Cardinal Daniel DiNardo of Galveston-Houston, outgoing bishops' conference president, called on the metropolitan bishops – through whom reports from the reporting system will funnel – "to do our work very well. ... So we can move ahead and have this ready sooner rather than later."

"Our people are looking forward to having this and we will have to work hard to do it," he told the assembly.

The bishops approved the establishment of the reporting system in June. Under it, people would be allowed to make reports of "certain complaints" through a toll-free telephone number as well as online.

Picarello reiterated the system would fall in line with the requirements of Pope Francis' "motu proprio," issued in May.

The "motu proprio" also requires dioceses and eparchies worldwide to establish "one or more public, stable and easily accessible systems for submission of reports."

The bishops' conference plan calls for all reports to be funneled through a central receiving hub, which would then be responsible for sending allegations to the appropriate metropolitan, or archbishop, responsible for each diocese in a province and to the papal nunciature in Washington. The U.S. has 32 metropolitans.

The metropolitan will be responsible for reporting any allegation to local law enforcement authorities as the first step toward investigating a claim.

The reporting system will be subject to review to determine its effectiveness in three years, as called for under "Vos Estis Lux Mundi."