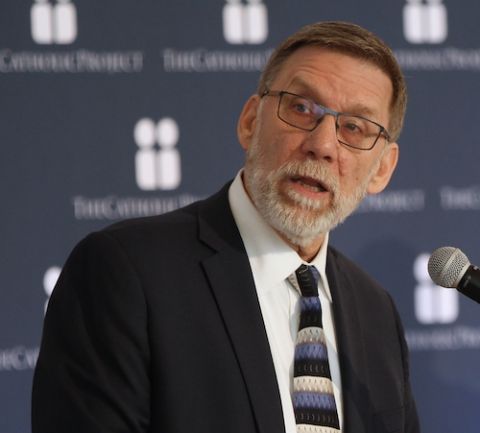 Editor's note: In April 2021, NCR reported that Gaillardetz was cleared of these allegations and reinstated as department chair.

Boston College is investigating the chairman of its theology department following allegations he sexually assaulted a former classmate in 1987.*

Richard Gaillardetz, a professor of Catholic systematic theology and a former president of the Catholic Theological Society of America, has been accused by theologian Laura Grimes in two YouTube videos made public on Jan. 23 and Feb. 24.

Gaillardetz, a past NCR contributor and a prominent author of over a dozen books, denies the allegations.

In a statement provided to NCR, the Jesuit-run institution said it "takes any allegation of sexual misconduct with the utmost seriousness, and has hired a law firm to conduct an independent investigation."

Grimes alleges two instances of forced sexual assault following a consensual relationship** between her and Gaillardetz during their time as graduate students at the University of Notre Dame. Grimes, an independent Catholic bishop in the Old Catholic Church, said she believed Gaillardetz to be guilty of both spiritual and sexual abuse.

"Even though you are not technically ordained," she says in the video, she claims he is "absolutely" a religious leader. Grimes also alleges that such instances of abuse are widespread and often go unreported in both the church and higher education.

Despite the alleged incidents taking place over 30 years ago, Grimes said that she decided to come forward now after hearing Gaillardetz speak out about the clergy sex abuse crisis in recent years.

"I first learned of Dr. Grimes' accusations against me on January 23rd," Gaillardetz told NCR via email. "Soon after, Boston College hired an independent law firm to conduct an inquiry into the credibility of the allegations."

"Until the inquiry is completed I have stepped away from teaching responsibilities and the university has named Prof. Kenneth Himes, OFM, acting chair of the Theology Department, in the interim," he wrote. "I am eager to set the record straight with respect to Dr. Grimes' reckless allegations but I have been advised not to respond to the allegations until the investigation is concluded."

* This article has been updated to include the year of the alleged assault.

** Editor's note: In an email to NCR after publication of this story, Grimes indicated that there was no sexual relationship before the two encounters discussed in her videos. She initially considered the first consensual, but has reconsidered and no longer views it as such.