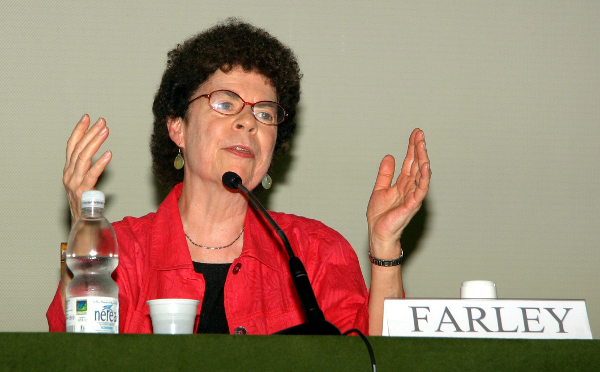 Mercy Sr. Margaret Farley speaks at an event hosted by Catholic Theological Ethics in the World Church in Padua in 2006. (Jan Jans)

There is a long list of Catholic moral theologians whose works on sexual ethics in a similar vein have been condemned or censured by the Congregation for the Doctrine of the Faith in the course of the last 40 years. Pope John Paul II wrote his 1993 encyclical, Vertiatis splendor, because of the discrepancy between the official teaching of the church on moral matters and the teaching of some moral theologians even in seminaries. According to the pope, the church is "facing what is certainly a genuine crisis, which is no longer a matter of limited and occasional dissent, but of an overall and systematic calling into question of traditional moral doctrine."

All have to recognize there is such a real crisis in the church today. But the crisis is not just a crisis in moral theology; it involves a crisis in the church as a whole and in our very understanding of the Catholic church. According to the well-respected Pew Forum on Religion & Public Life, one in three people who were brought up as Roman Catholic in the United States are no longer Catholic. The second-largest "denomination" in the United States is former Catholics. One out of every 10 people in the United States is an ex-Catholic. We all have personal experience with those who have left the church because of the teaching on sexual issues. Related issues, including the role of women in the church, celibacy for the clergy, and the failure of church leadership to deal with the scandal of child abuse and its cover-up, have also been recognized as reasons why many people have left the Catholic church.

The reaction of popes and bishops to revisionist moral theologians is only one part of a growing reality in our church today. There is a litany of other similar actions taken by the Vatican -- the restrictions placed on the Leadership Conference of Women Religious; the reining in of the activities of Caritas Internationalis, the church's agency dedicated to helping the poor; the very negative reaction to the priests' associations in Austria and Ireland; the removal of William Morris, the bishop of Toowoomba in Australia, for merely encouraging the discussion of celibacy and the role of women; the appointment of only very safe clergy as bishops; etc. The list goes on and on.

What is happening here is that the pope and the Vatican are more and more defending the idea of a remnant church -- a small and pure church that sees itself often in opposition to the world around it. It seems as if church authorities are not concerned at all about those who leave the church. Any other organization would take strong action to remedy the loss of one-third of its members. But the remnant church sees itself as a strong church of true believers, and therefore is not worried by such departures.

This concept of the church is opposed to the best understanding of the Catholic church. The word "catholic" by its very definition means big and universal. The church embraces both saints and sinners, rich and poor, female and male, and political conservatives and liberals. Yes, there are limits to what it means to be Catholic, but the "small 'c' catholic" understanding insists on the need to be as inclusive as possible. Many of us were deeply impressed by the gestures of Pope Benedict at the beginning of his papacy by reaching out for dialogue with both Hans Küng and Bishop Bernard Fellay, the head of the group originally founded by Archbishop Marcel Lefebvre. Unfortunately, today, dialogue is still going on with Bishop Fellay, but not with Hans Küng.

The basic problem in all of this is the understanding and role of authority in the Catholic church. This issue is much too vast and complicated to be discussed here in any detail, but three points should guide any consideration of authority in the church.

First, the primary authority in the church is the Holy Spirit, who speaks in very diverse ways, and all others in the church, including office holders, must strive to listen to and discern the call of the Spirit.

Second, the church has to put flesh on the understanding of Thomas Aquinas that something is commanded because it is good and not the other way around. Authority does not make something right or wrong. Authority must conform itself to what is true and good.

Third, the danger for authority in the church is to claim too great a certitude for its teaching and proposals. Margaret Farley developed this point in a very significant essay, "Ethics, Ecclesiology, and the Grace of Self-Doubt." The grasp for certitude too easily shuts the mind and sometimes closes the heart. The grace of self-doubt allows for epistemic humility, the basic condition for communal and individual moral discernment.