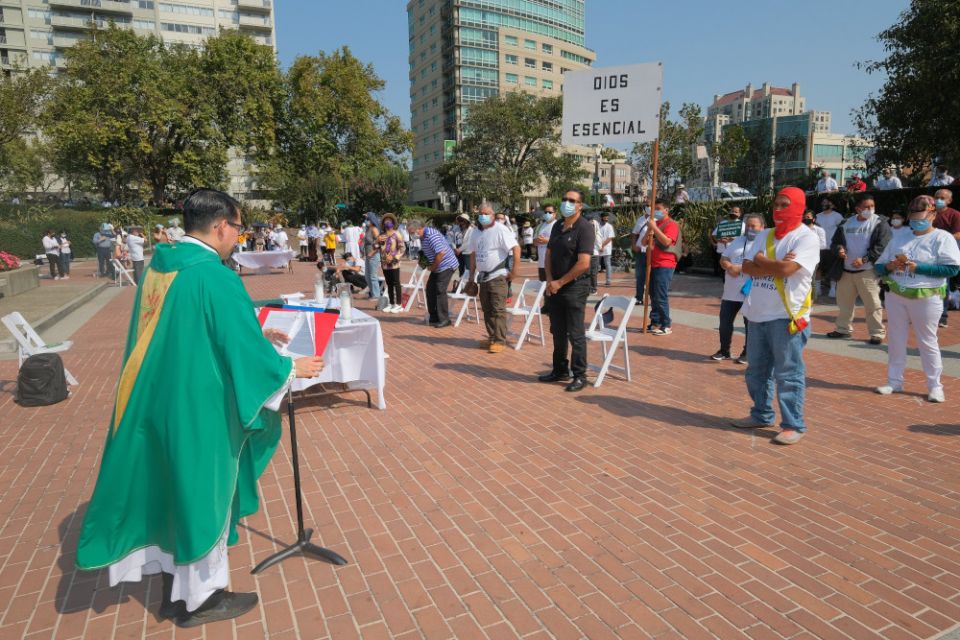 Catholics in San Francisco attend an outdoor Mass during a "Free the Mass" demonstration Sept. 20, 2020. San Francisco Archbishop Salvatore J. Cordileone's sermon at the Cathedral of St. Mary of the Assumption said the city was discriminating against Catholics by imposing harsh restrictions on public worship during the coronavirus pandemic. More than 1,000 people participated in the event and outdoor Masses. (CNS/Archdiocese of San Francisco/Dennis Callahan)

Pasadena, California — After a federal appeals court rejected its motion for an emergency injunction against California Gov. Gavin Newsom's COVID-19 restrictions on indoor worship, a Pasadena-based apostolic Christian church filed a brief Oct. 5 for that court to consider the "full merits" of a preliminary injunction.

In a 2-1 decision Oct. 1, a three-judge panel of the U.S. Court of Appeals for the 9th Circuit ruled against Harvest Rock Church and Harvest International Ministry, which argues Newsom's restrictions are unconstitutional because they violate the First Amendment's clause on free exercise of religion.

At issue are guidelines Newsom issued in March and expanded over the summer in response to a spike in COVID-19 cases.

He instituted a ban on singing and chanting in places of worship and divided the state's counties into four "tiers" — with Tier 1 being the area where the risk is highest and in-person services are banned. Los Angeles County, were Pasadena is located, is Tier 1. Restrictions in the other tiers vary with the level of coronavirus risk.

In addition to in-person worship at Harvest Rock Church, the church also has many home Bible studies and fellowship groups, which are not allowed.

After U.S. District Judge Otis D. Wright of the Central District Court of California denied the church's motion for a temporary restraining order and a preliminary injunction, Harvest Rock appealed to the 9th Circuit.

Judges Johnnie B. Rawlinson and Morgan Christen issued the majority opinion, saying state officials are applying "the same restrictions to worship services as they do to other indoor congregate events, such as lectures and movie theaters." They consider the restrictions "neutral," they said, and given the seriousness of the coronavirus, they do not violate the Constitution.

In a lengthy dissent, Judge Diarmuid F. O'Scannlain said: "The state cannot evade the free exercise clause merely by linking its severe restrictions on worship attendance to those imposed on one or two categories of comparable secular activity; it must also justify its decision to treat more favorably a host of other comparable activities which so evidently raise the state's same expressed concerns about disease spread."

"The Constitution, emphatically, does not allow a state to pursue such measures against religious practices more aggressively than it does against comparable secular activities," he wrote.

Liberty Counsel, which is representing Harvest Rock Church and its ministries in court, said in an Oct. 5 news release that Newsom "discriminates against churches, home Bible studies and fellowship meetings" but "continues to encourage thousands of protesters to gather throughout the state. Like Gov. Newsom, Pasadena has allowed hundreds and thousands of protesters ... many of whom are not wearing masks."

"The Supreme Court has clearly stated that under the First Amendment, the state cannot prohibit people from attending church against their will. Yet, that is what Gov. Newsom has done," said Mat Staver, Liberty Counsel founder and chairman.

"The church has been essential for 2,000 years, and the First Amendment recognizes that the free exercise of religion is essential," he added. "The church is now more essential than ever because there are so many hurting people, especially in California, where the governor has decimated the economy and hurt many people by his draconian restrictions."

We have a story to tell: Indigenous scholars, activists speak up amid toppling of Serra statues