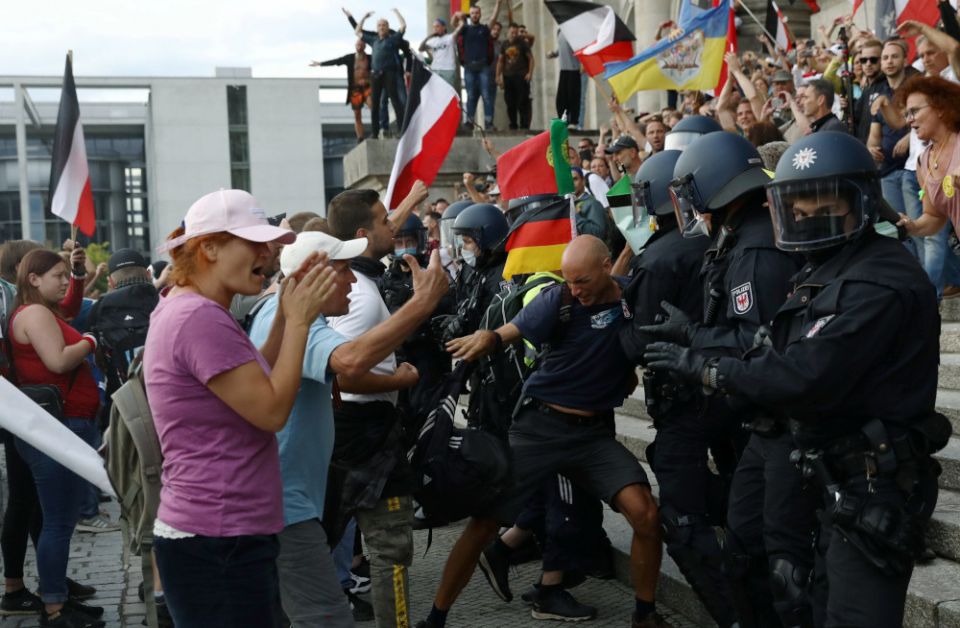 Police scuffle with a demonstrator on the steps of the Reichstag Building in Berlin Aug. 29, 2020, during a rally against the government's restrictions during the COVID-19 pandemic. (CNS/Reuters/Christian Mang)

Berlin — Churches in Germany criticized the attempt by demonstrators to "storm" the Reichstag building in Berlin, the seat of the Bundestag, or lower house of parliament.

Bishop Georg Batzing, president of the German bishops' conference, expressed his shock at the behavior of participants in an Aug. 29 demonstration against the government's policies to contain the COVID-19 pandemic, reported the German Catholic news agency KNA.

"The basic rights to freedom of expression and freedom of assembly are beyond question. But the scenes in front of the German Bundestag are unacceptable," said Batzing. Such "excesses" must not happen again, he added.

Essen Bishop Franz-Josef Overbeck, head of the German bishops' commission for society and social affairs, said a "peculiar alliance of right-wing extremists, anti-vaccinationists and adherents of conspiracy ideologies" aimed to "damage the symbols of our democracy." That was unacceptable, said Overbeck.

He thanked "all the security forces who stood firm in a situation that was dangerous for them personally and defended our democracy in an exemplary manner." Christians had to take a clear position, especially if Jews were again "exposed to open anti-Semitism," the bishop added.

KNA reported a group of protesters on the fringes of a mass demonstration broke through barriers at the Reichstag and reached the steps of the parliament. Some of them waved the black, white and red flag seen as a symbol of right-wing extremists.

Germany's Protestant Church called on people to stand together at a time "when demonstrations by right-wing populists and conspiracy theorists are being instrumentalized and openly anti-democratic symbols are displayed in front of our parliament building."

"Right-wing and right-wing extremist groups" had mingled with the demonstrators from the start, said Josef Schuster, president of the Central Council of Jews. He warned against an increase in anti-Semitism, saying, "For months, conspiracy myths with a basic anti-Semitic tendency have been deliberately stirred up in the coronavirus debate."

Time to live the politically impossible art of the Gospel

Gift of storytelling carries Jesus' calling to save lives with stories