As Day of the Dead approaches, signs of life in LA's pandemic-challenged Olvera Street 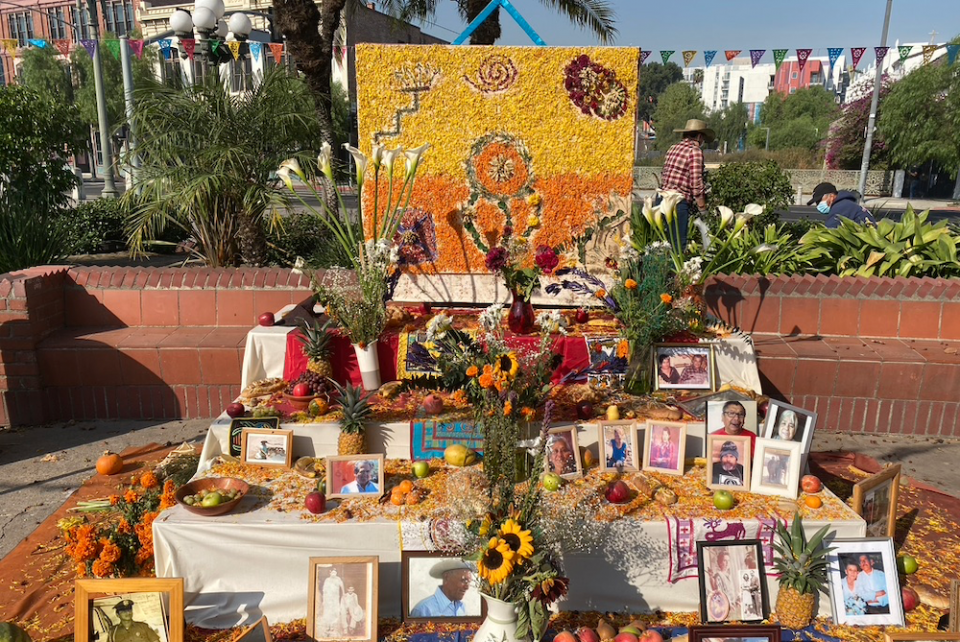 Los Angeles — On the morning of Oct. 27, Teresa Velez and her daughter-in-law were busy setting up an ofrenda altar for two beloved "abuelos" of the Olvera Street community.

A few visitors silently circled the displays in the plaza adjoining the street, pausing to look at details — a giant Toma Todo Mexican spinning top, a black-and-white photograph, a pineapple.

Velez had never contributed an ofrenda for the Día de los Muertos (Day of the Dead) celebrations before, but she was inspired this year to honor two men she used to see often at Juanita's Cafe, where she works as a cook.

The days and nights before Día de los Muertos are usually the busiest time of year for Olvera Street, said Junior Torres, who works at a taco stand halfway down the narrow avenue. People gather for a novenario with nine nights of festivities combining Maya, Aztec and Catholic traditions — processions, prayer, eating and drinking, face painting and live entertainment leading up the holiday, which has been celebrated on Nov. 2 since the Catholic Church moved pre-Columbian indigenous traditions of honoring the dead to coincide with All Souls Day.

People also come to visit the altars, called ofrendas (Spanish for "offerings") because they are dedicated as offerings to the souls of the deceased, honoring and welcoming them with candles and flowers, and often photographs, crosses, colored paper, water and salt to quench souls' thirst, food, other drinks or treasured objects. 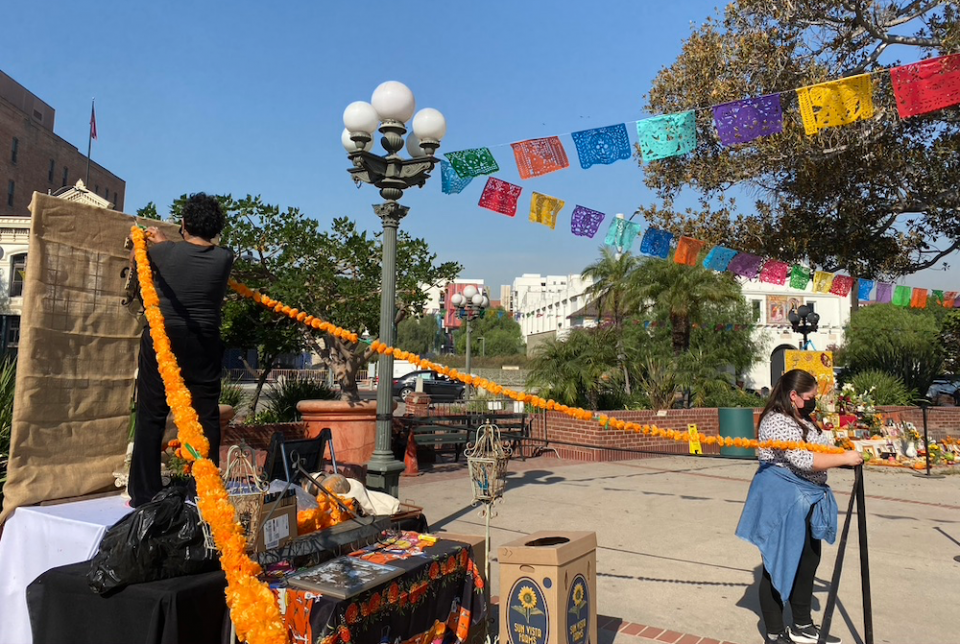 Teresa Velez, left, and her daughter-in-law Olivia Butler, hang marigold garlands on an "ofrenda" in Los Angeles Plaza for a COVID-constrained Día de los Muertos observance. Day of the Dead celebrations have been going on here for more than 30 years. (NCR photo/Lucy Grindon)

Olvera Street, a road in the historic heart of Los Angeles that was turned into a center for Mexican culture and commerce in 1930, has been hosting Day of the Dead celebrations for more than 30 years.

But with celebrations having been moved online because of the pandemic, the ofrendas have become the main event. "It's been very different this year," said Valerie Hanley, who owns the Casa California shop. "Luckily we've been able to at least put up the community altars so people can come and look and see it as an art exhibit," she said.

"For me, to not be able to celebrate with everybody that usually comes is very sad," Velez said, as she attached a garland of marigolds to her ofrenda. "But at least there is a bit of the celebration that we wanted to have — it's good that there's at least something."

Some of this year's ofrendas honor COVID-19 victims. The altar from the Mexican Cultural Institute of Los Angeles memorializes prominent Mexican Americans and community members who died in the past year. 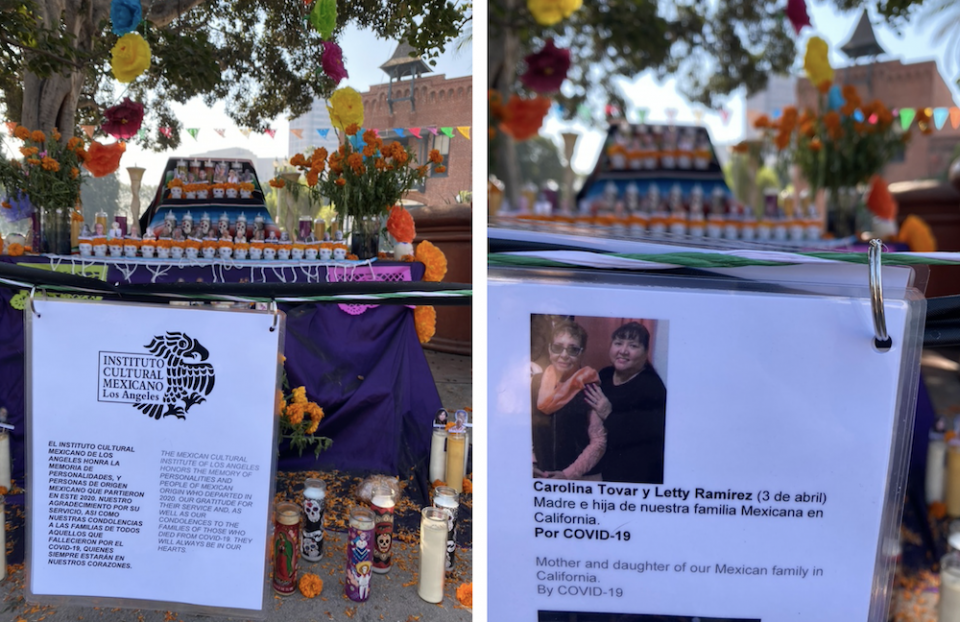 Left: The "ofrenda" altar from the Mexican Cultural Institute of Los Angeles honors 32 prominent Mexican Americans and community members who have died in the past year. Six of those depicted died from COVID-19. Right: Mother and daughter Carolina Tovar and Letty Ramirez were among those honored on the cultural institute's "ofrenda" who died from COVID-19. (NCR photos/Lucy Grindon)

"Our condolences to families of those who died from COVID-19. They will always be in our hearts," reads the message hanging in front of it. According to the institute's short biographies of the deceased, six out of 32 died from COVID-19.

Another ofrenda will be dedicated just to COVID-19 victims, though it had not yet been set up on Tuesday when NCR visited because the merchant who volunteered to build it had not come to open her shop. Business has been all but nonexistent because of the pandemic, so some shops have been closed on weekdays, Hanley explained.

Though some visitors milled around among the skeleton decorations on the street, only the restaurants seemed to have customers. "Now we're at like 50% business," said Torres, the taco stand's cook, "but the other people can tell you different things because they don't sell food — food is always selling."

"It's very difficult with so many restrictions, but the people do what they can do. We keep working," Velez said. The two men on her ofrenda, who died about five years ago, had each worked on Olvera Street for decades, she said. In addition to calling them both "Abuelo" (Grandfather), the community affectionately nicknamed them Pancho Villa and Emiliano Zapata, after two Mexican revolutionaries. By honoring them with an ofrenda, Velez is participating in the Día de los Muertos tradition of publicly celebrating the departed not just when they die, but every year.

Olivia Butler, Velez's daughter-in-law, noted that the two men were not members of Velez's family. "It's more of a community family," Butler said, "people who grew up working alongside each other and are still remembered."

Though Butler never met "Villa" and "Zapata" personally, she said she appreciates how ofrendas make it possible to connect with those who have died by highlighting their favorite foods and things that brought them joy. One ofrenda with a photo of a smiling couple in L.A. Dodgers hats features a bottle of 805 (a California ale), a bag of Haribo Goldbears candy and a single avocado.

A cross on the ofrenda next door has a message in Sharpie scrawled across it: "No pierdas la esperanza," it reads — Don't lose hope.

Read this next: 'Coco' delivers stunning beauty in afterlife adventure

Coronavirus | As Day of the Dead approaches, signs of life in LA's pandemic-challenged Olvera Street

AOC embraces reproductive justice, and other Catholics should, too

The pope's apology to Canada's Indigenous peoples was truly remarkable

His strong heart: In memory of my friend Jake