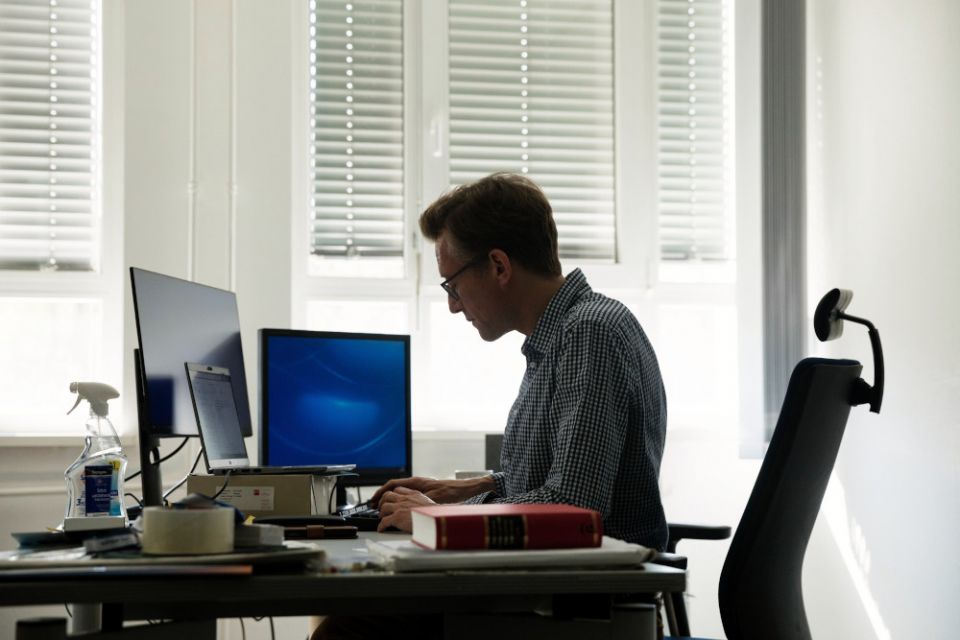 Stephan von Kolson, head of the media department at Germany's third ecumenical convention, or kirchentag, is pictured at his desk April 23, 2021, preparing for the May 13-16 convention in Frankfurt. Most of the convention will be virtual. (CNS photo/KNA/Angelika Zinzow)

Organizers had hoped to attract more than 100,000 visitors to the approximately 2,000 public events May 13-16, reported the German Catholic news agency KNA. With the COVID-19 pandemic, that has changed.

"As the people can't come to Frankfurt, the ÖKT will come to them at home," said Thomas Sternberg, Catholic president of the convention, using its German acronym.

Bettina Limperg, Protestant president of the convention, said when its motto, "Schaut hin" ("Take a look") was devised in 2020, organizers were still hoping to have an in-person convention. Now most people will be taking a look on computer screens.

KNA reported the kirchentag will open on the feast of the Ascension with an ecumenical service on a parking deck with a view of the famous skyline of Frankfurt's international banking center. It will be broadcast live on German television. The exact location will not be made public beforehand to avoid crowds gathering during the pandemic.

The digital program, with about 80 events each day, will focus on 10 main topics, including the church and power, international responsibility and the climate crisis. One hour will be devoted to each topic. There will also be a virtual meeting place on the ÖKT website, where people will be able to meet informally.

Attendance at local convention religious services will be limited to people from the Frankfurt area, with pandemic restrictions. There will be denominational services May 15 and a final service a day later at a shipyard on the River Main.

Addressing an ongoing request between Catholics and Protestants in Germany, Limburg Bishop Georg Bätzing, president of the German Catholic bishops' conference, has said there will be no joint Communion services by clergy of different denominations. However, he recently reaffirmed "those who in their conscience believe what is celebrated in the other denomination may receive Communion."

Germany has many mixed marriages — Catholic and Protestant — and the issue of being able to receive Communion at each other's churches has long been an issue of concern. In 2018, one Catholic-Lutheran couple who had been married 24 years told Catholic News Service that many couples like themselves "have experienced rebuffs and coldheartedness from the churches, which has strained their marriage and led to estrangement from church."

German Catholic and Protestant theologians and bishops had published an appraisal of the topic in May 2020, and it was scheduled to be discussed at the German bishops' fall plenary assembly in Fulda at the end of September.

However, on Sept. 18, the Vatican Congregation for the Doctrine of the Faith voiced strong objections to the appraisal, saying that differences between Catholics and Protestants in the understanding of the Eucharist and the ministry were "still so grave" that they ruled out the attendance at each other's services, KNA reported.

Lutheran Bishop Heinrich Bedford-Strohm, president of the council of the German Protestant Church, said the kirchentag would "send a strong signal for ecumenical relations." He said people should not be discouraged by obstacles on the path to "mutual hospitality at the Eucharist and Lord's Supper."

Latino council looks toward next 25 years

Pope and patriarch issue deep call for unity, saying humanity depends on it