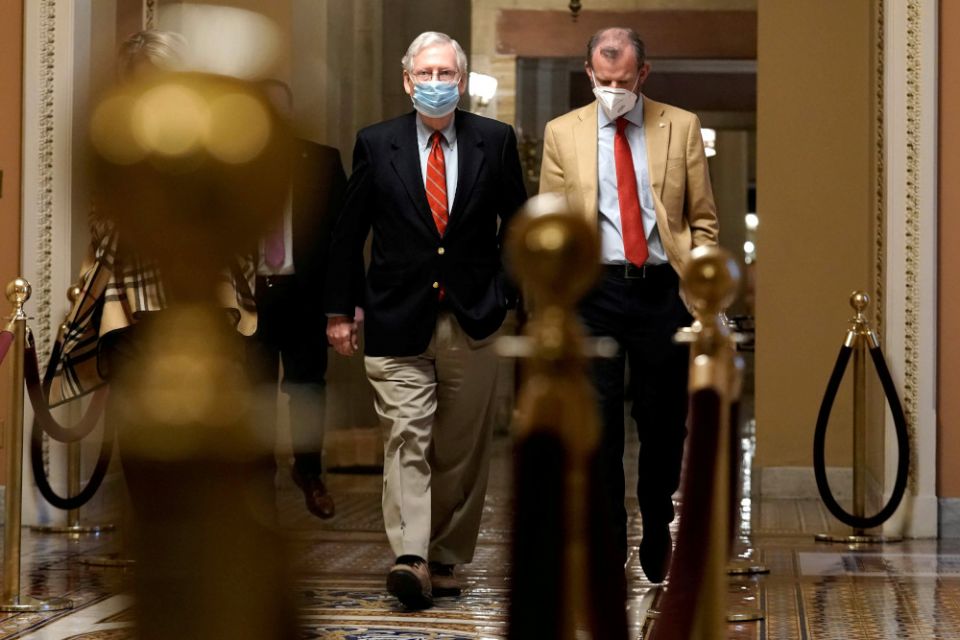 What had been separate Democratic and Republican coronavirus relief bills became a bipartisan effort thanks to Congress' Problem Solvers Caucus, according to a lobbyist for Network, a Catholic social justice lobby.

The measure was passed late Dec. 21 before Congress wrapped up its work for its two-year session, with President Donald Trump's signature on the measure to follow Dec. 22. The House voted 359-53 for passage, and the Senate followed with a 92-6 vote.

But that "began a very important bipartisan discussion, especially in the House," she added. "After the election, they reached out across the Capitol to the Senate side about the very important bicameral, bipartisan proposal that became the basis for the package."

At $900 billion, it still may not seem like enough, but the pandemic relief package finally hammered out Dec. 20 by congressional leaders from both parties is a welcome first step, according Peralta-Schulte, who had been working with elected officials and their aides since virtually the start of the pandemic to find common ground to obtain relief.

The effort seemed disjointed at times because, in Peralta-Schulte's words, "we never knew which vehicle was going to move" — the House-passed HEROES Act, a $3 trillion package meant to augment the $2.2 trillion CARES Act that quickly passed both chambers in March, or the HEALS Act, a $1 trillion measure proposed in July by Senate Majority Leader Mitch McConnell, R-Kentucky.

The HEALS Act included a second round of stimulus checks at the same $1,200 amount as in the CARES act, along with a "sequel" to the Paycheck Protection Program to mitigate layoffs. It also includes increased funding for schools, higher learning institutions and hospitals.

The Heroes Act included about $1.13 trillion of emergency supplemental appropriations to federal agencies, economic assistance to state and local government, about $485 billion in safety net spending, including the expansion of unemployment benefits and increased funding for utilities payments and job training for low-income individuals, and a $1,200 stimulus check per individual.

"For months we had the pre-sausage making," Peralta-Schulte said, using legislative parlance for bringing disparate elements into one bill. "Then we had the grand meal, the banquet — in terms of the HEROES Act," which she said she had a hand in crafting. "Then we had the dry toast on the other side. ... The bipartisan proposal became the basis, obviously of the final package."

"A lot of my work was focused on Republican members of the Senate. We knew that a lot of these pieces were passed in the House Democratic bill," Friedman told Catholic News Service in a Dec. 21 phone interview, "but we knew there needed to be some pressure from Republicans on the (Trump) administration to do a bill."

"From a Network perspective, it had most of our objectives," Peralta-Schulte said. "The sausage is made."

The bill includes stimulus checks of $600 per person, including spouses and minor children. Adult dependents are ineligible for the stimulus. The $600 checks would be distributed to single people earning $75,000 or less. Married couples earning $150,000 or less who file jointly would receive checks for $1,200 ($600 for each spouse). A family of four (with two minor children) would receive $2,400.

But benefits are available for "mixed status" families, where one spouse is not legally in the United States — something Peralta-Schulte considered a huge victory.

"That was not in the bipartisan proposal," she said. "We were able to work with both (Republican) champions like Mr. (Marco) Rubio (R-Florida), Mr. (Mitt) Romney's (R-Utah) staff, others who were committed to that, and we were able to work with our champion in the speaker's office (Rep. Nancy Pelosi, D-California), (Rep. Rosa) DeLauro's (D-Connecticut) office, (Rep.) Richard Neal's (D-Massachusetts). ... They have been very focused on expanding unemployment insurance,."

The bill provides about $25 billion in emergency assistance to renters, and extends a moratorium on evictions through the end of January.

The biggest chunk in the package is $325 billion in business aid, with $275 billion of that going for a new round of Paycheck Protection Program funding.

Other government aid includes $82 billion for schools, $45 billion for transportation needs including Amtrak, $20 billion for vaccine distribution and $13 billion to expand the Supplemental Nutrition Assistance Program.

The package allows states and cities to use unspent money approved for them by the Cares Act for a full year after the bill was signed into law March 27. Under the CARES Act, any unspent money at the at the end of 2020 would have to be returned to the federal government.

The White House lobbied for — and got — a tax break for corporate meal expenses. Critics said it will be less of a boon to the ailing restaurant industry than a boondoggle for corporations, deriding it as the "three-martini lunch" clause.

The bill also includes $1.4 billion in new funding for Trump's wall along the U.S.-Mexico border and new border security technology.

One provision McConnell had insisted on, a shield for corporations from pandemic-related lawsuits, is absent from the package. A late bid to keep the Federal Reserve Board from using the same or "similar" coronavirus lending programs in the future was trimmed to lending programs expiring at the end of 2020, and barring the Fed from using the exact same programs.

"When Republicans and Democrats come together for the common good, lives are saved," said a Dec. 21 statement from Sr. Simone Campbell, a Sister of Social Service, who is the outgoing head of Network. She criticized Senate Republicans for refusing to even consider the HEROES Act.

"The needs of our people are urgent and Congress finally heard their cries," Campbell said. "This compromise legislation will help our people through the long, dark winter ahead. There is still more to do, but this is a step, and I know President-elect (Joe) Biden will continue working for long-term relief in the coming year."

In a Dec. 16 statement, Cardinal Timothy M. Dolan of New York sought inclusion of relief for private and religious schools in any aid package.

It was not immediately clear whether any of the school aid in the package is targeted for nonpublic schools.

"A lot of assistance is needed in areas this bill didn't touch," including help for states and municipalities facing severe cutbacks due to diminished revenues since the pandemic's start, Friedman said. Although $900 billion seems like a lot of money, "this is a down payment," she added. "We will start working on another bill — early, early, early 2021."

In a statement issued just before the vote took place, Dominican Sr. Donna Markham, president and CEO of Catholic Charities USA, lauded the bipartisan effort to make the bill a reality. She called it "a temporary reprieve, a short-term lifeline that is a step in the right direction."

"We will be calling on Congress to return to work in January to provide lasting support to those who are sick, unemployed, hungry, threatened with eviction and suffer other consequences from this horrible pandemic," she added, echoing Friedman.