Orange County church reopens with over 300 parishioners across three Masses 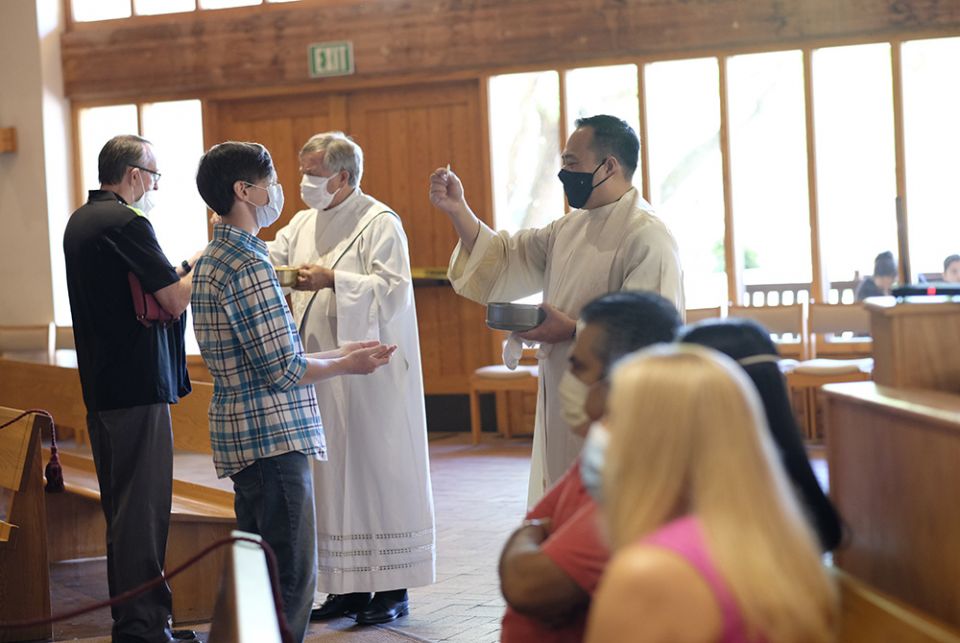 RANCHO SANTA MARGARITA, CALIF. — For the Quilliam family, driving an hour for their first Sunday Mass in three months was worth it.

It was their first in-person Mass since all worship services in California were shut down in March due to the COVID-19 pandemic. The Quilliams attended San Francisco Solano Church, known by parishioners as "Solano," on June 14 in Orange County, California.

"With the unknown of the pandemic, the fear of what's going to happen next for me, stepping through the doors of church, receiving Communion, was a real consolation," said Jim Quilliam, whose family lives in Manhattan Beach, an hour north in Los Angeles County. "Many times we go to Mass, we take it for granted — I know I do. How blessed we are to be able to practice our faith in safety, in an environment where people are grounded in their faith." 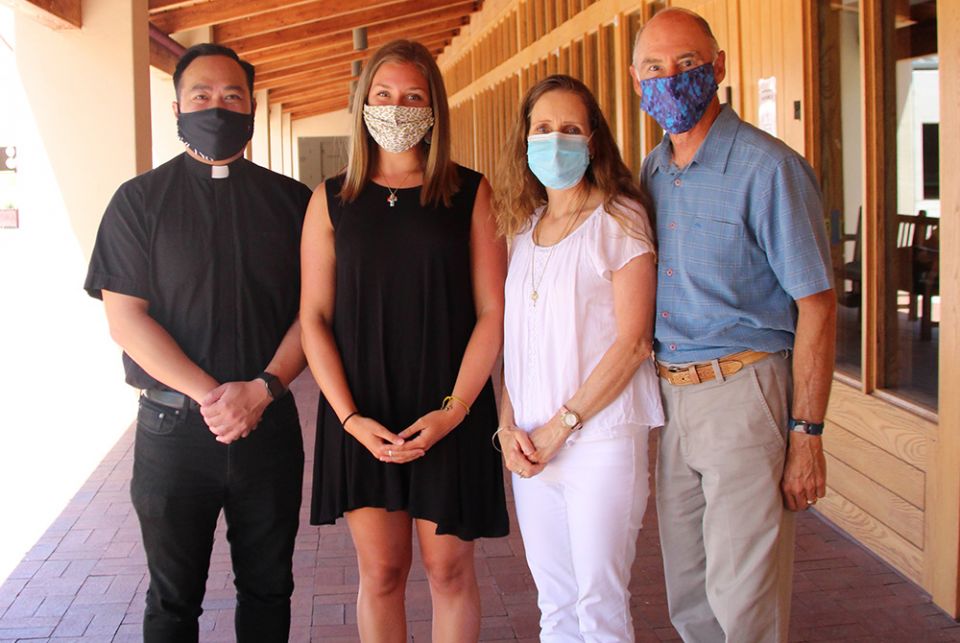 Last May, the Orange Diocese announced that its 57 parishes could begin reopening in a "phased-in approach" on June 14. With safety measures in place to protect public health, churches were allowed to gradually reopen at 25% of their congregation size, or 100 people for every Mass, whichever is smaller. Gatherings aside from Mass are not yet permitted.

A typical Sunday at Solano — which has served Orange County's Rancho Santa Margarita community for 30 years — is filled with lively music, kids running in the courtyard, coffee and doughnuts after Masses.

This time, the baptismal fonts were drained. Churchgoers were instructed to line up, family by family, and present their free emailed Mass tickets to go inside. Offertory baskets were placed at exits and entrances instead of passed around. Holy Eucharist was distributed at the church exit, along with hand sanitizer.

Bishop Kevin Vann of the Diocese of Orange, California, extended a dispensation from the obligation to attend Sunday Mass and Holy Days of Obligation, until the County of Orange Health Authority deems it safe for large public gatherings again. 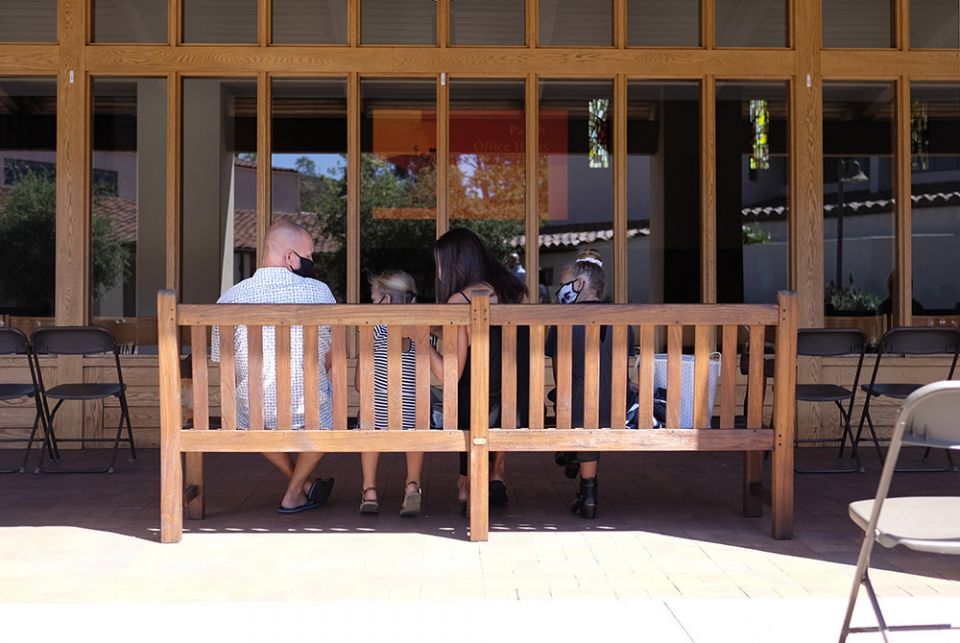 Solano parishioners who couldn’t get tickets to the 100-seat limited Sunday Mass still came to church to pray. (Allyson Escobar)

Vann said the California bishops worked with health officials and California Gov. Gavin Newsom to establish guidelines for safe Mass attendance and distribution of the Eucharist, which include strict sanitizing and social distancing. Massgoers are seated apart by family. All are strongly suggested to wear masks to protect themselves and others.

"The pandemic is far from over, so we will begin with small steps," Vann said. "Realizing that reinfection is a concern ... I am asking our pastors to prepare their churches to ensure that these guidelines are followed without exception."

The Diocese of Orange serves Orange County's population of around 3.2 million people.

Countywide, there are 10,737 total confirmed cases of coronavirus, and 273 deaths (as of June 24). Neighboring Los Angeles County has nearly 23,000 new cases.

As phase 1 reopening began in June for most churches in California, Fr. Duy Le, who was installed as Solano's pastor during the pandemic, shared his gratitude at welcoming over 300 parishioners across three Masses on opening weekend.

"A lot of people couldn't be where you are; they could get a ticket, they're vulnerable, they're scared. So I want us to pray for those who can't be here," Le said at a June 14 morning Mass. "Every single part of what we receive in the Mass is the fullness of Christ; body, blood, soul and divinity. This is what we celebrate today in the Gospel. It's good to be home." 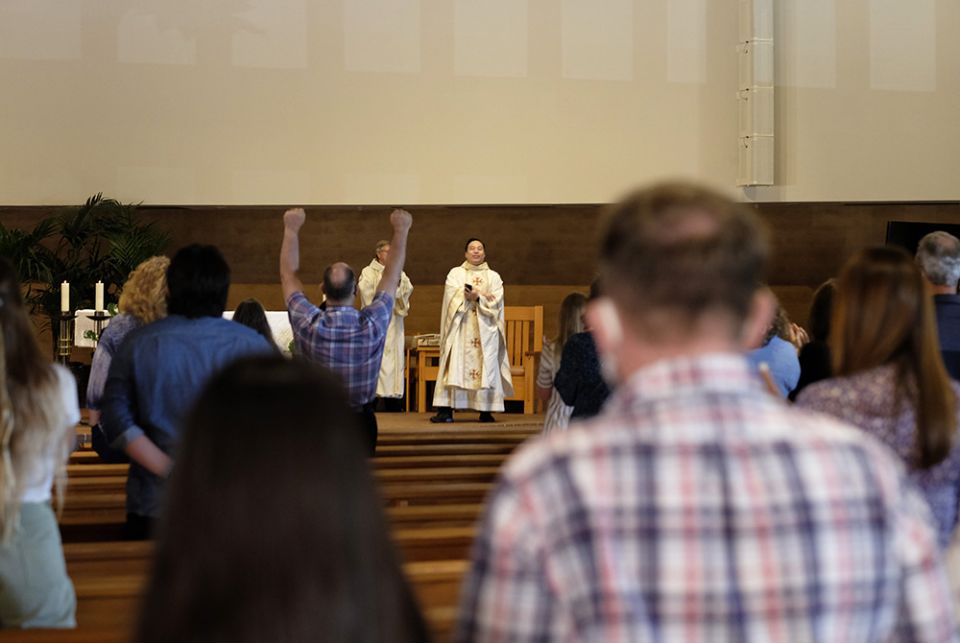 An excited parishioner celebrates being back at Mass in-person on June 14 at San Francisco Solano Church in Rancho Santa Margarita, California. (Allyson Escobar)

Parish marketing and communications coordinator Shay Ryan was glad to be able to sing again in the pews; normally filled with at least 800 people instead of 100.

"Even when everyone's wearing masks, I love being able to hear everyone sing," said Ryan. "It makes everything feel a little bit normal again."

Le said he was heartbroken at not being able to distribute Communion, celebrate weddings or funerals in the traditional way during the pandemic. But as they await the next phases of reopening, he said he is glad to be able to "shake things up" for his quarantined parishioners, with help from his team and permission from the bishop.

"There was so much digital; we needed the analog — something people can come to, touch, taste, feel. We needed connection with the people," Le said. 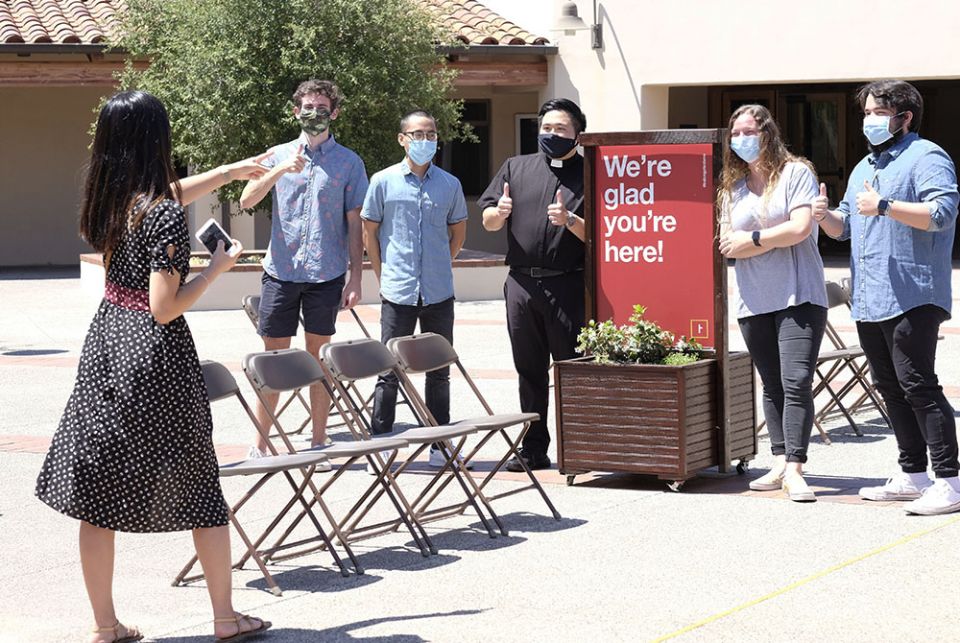 With a majority of attendees being young families, one of the main concerns for parish leaders is how to continue to serve the elderly and immunocompromised.

"We're not allowed to do home visits yet, but we can do anointing [of the sick]," Le said, citing a recent Zoom gathering, where nearly everyone on the call was 70 and older. "We're trying to help them grow in their faith through communication and technology the best way we can."

20-year-old Vanessa Quilliam, a junior at the Franciscan University of Steubenville, said that while discovering Solano online during the quarantine has blessed her and her family, there's nothing quite like the physical presence of Christ and his body, the church.

"The personal encounter moved me; getting to receive Jesus there, instead of on TV," she said. "The experience has made us really appreciate going to Mass, especially all together."

[Allyson Escobar is a journalist from the greater Los Angeles area and a graduate of the City University of New York's journalism school. Her work has appeared in national and Catholic publications including NBC News, the Los Angeles Times, America Magazine, The Tablet and Angelus News.]

The cult of Trump now threatens us all