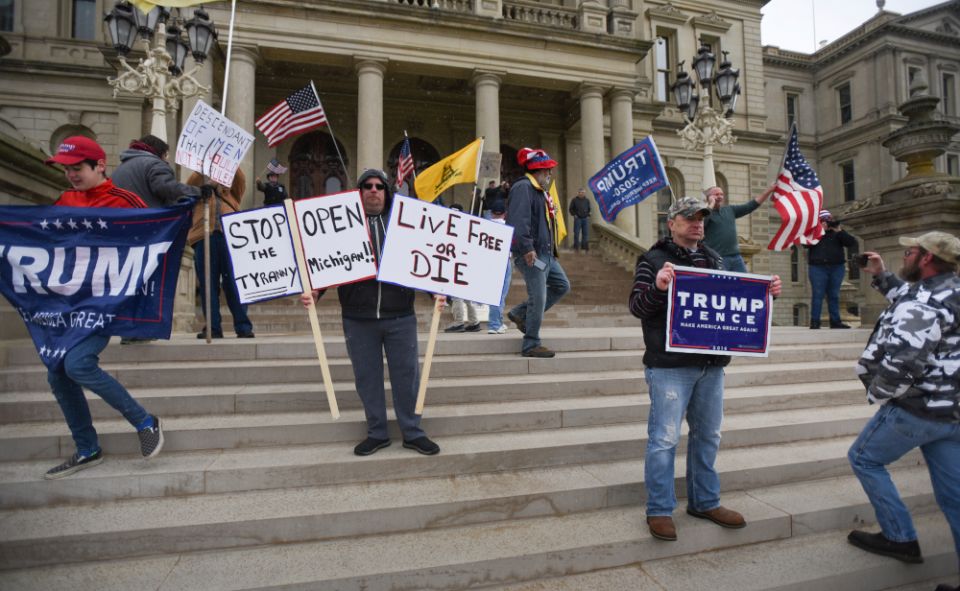 Behind President Donald Trump's effort to accelerate re-opening the U.S. economy during the pandemic is a contingent of GOP allies eager to have his back.

“It’s very much time to start having that conversation and start figuring that out,” said Sen. Pat Toomey, R-Pa., who has shared his views with Trump.

The push to revive the economy is being influenced and amplified by a potent alliance of big money business interests, religious freedom conservatives and small-government activists, some with direct dial to Trump. They are gaining currency as a counter-point to the health professionals who warn of potentially deadly consequences from easing coronavirus stay-home restrictions too soon.

The mobilization is reminiscent of the tea party rebellion a decade ago, when conservatives roared against federal intervention in recession recovery. It’s drawing a similar band of deficit hawks alarmed by the $2.2 trillion rescue package, religious congregants who say their right to worship is being violated and conservative lawmakers warning of a slide toward big government “socialism” with expanded safety net programs.

“How do you rein in some of the tyrannical enforcement?” said Rep. Andy Biggs, R-Ariz., the chairman of the House Freedom Caucus, in a radio interview.

“It’s about promoting liberty and freedom,” Moore said. “It’s about stopping spending that will bankrupt the country and getting the $20 trillion engine that is the American economy started again as soon as possible — as in tomorrow.”

Early on in the crisis, Trump’s instinct to re-open was kept in check by two unlikely forces — the health professionals on the White House's coronavirus task force and the Trump campaign, which warned that widespread fatalities would be more damaging to the president’s reelection than the economic fallout, according to a Republican granted anonymity to discuss the private assessment.

But as the national stay-home guidelines appear to have limited the virus spread, and the mounting death toll, now beyond 27,000, is less than first envisioned, those political calculations seem to be shifting toward the economic concerns, the person said.

“We have to learn to live with this,” said Adam Brandon, president of FreedomWorks, which is holding weekly virtual town halls with members of Congress, igniting an activist base of thousands of supporters across the nation to back up the effort.

Advocates say they are focusing on parts of the economy and regions of the country where virus spread is low or workers can do their jobs while maintaining social distancing. They point to construction, landscaping and factory floors. They envision new rules — everyone wears face masks — and other safety precautions.

These Republicans warn that the public health emphasis has failed to take into account the broader societal toll of a prolonged shutdown and potential for a Great Depression. The government cannot keep throwing around money to prop up the economy, they say.

Toomey worries that diseases of despair, including substance abuse, will deepen with unemployment and rising poverty, and supply chain disruptions could lead to civil unrest. He said there are segments of the economy, particularly in rural Pennsylvania, "that could be open today."

One early shutdown opponent was the Koch-backed Americans for Prosperity, which argued businesses should be allowed to “adapt and innovate.”

“We’re really trying to get this thing going quicker than a lot of people may expect,” said Sen. David Perdue, R-Ga., in a radio interview. He spoke to the president over the weekend, he said, and Trump was already thinking about the transition.

“What we see right now is the free market, free-enterprise system is under threat,” Perdue said. “Don’t come in and tell us how to run our lives.”

Democrats warn that jumping ahead of public health guidelines could have disastrous effects if Americans retreat from social distancing and spark new hot spots that overrun hospitals with more patients than available beds.

House Speaker Nancy Pelosi issued a stark warning for Americans to “ignore the lies" and "listen to scientists and other respected professionals” to protect themselves and loved ones.

“All of us want to resume the precious and beautiful lives that America’s unique freedoms provide,” Pelosi wrote in a letter to Democratic colleagues. “But if we are not working from the truth, more lives will be lost, economic hardship and suffering will be extended unnecessarily.”

Some leading Republicans are pushing health care solutions. Tennessee Sen. Lamar Alexander, the chairman of the health committee, wants a "Manhattan Project” for testing, referring to the wartime effort to develop nuclear weapons, to give Americans confidence that children can return to school in the fall.

Across the nation, though, end-the-shutdown protests are flaring up.

In Texas, conservative state legislators said in a letter to Gov. Greg Abbott it's ultimately the “individual Texan's responsibility” to keep themselves safe. Many are backed by Texas oilman Tim Dunn, who co-authored a similar letter to Trump.

On April 15, drivers staged “Operation Gridlock” at the Michigan state capitol after Gov. Gretchen Whitmer’s decision to toughen rather than relax what already was one of the nation’s strictest stay-home orders.

Among the groups promoting the effort on Facebook was one with ties to the politically connected DeVos family, even though Education Secretary Besty DeVos stopped her political spending when she joined Trump's Cabinet.