by Jeff Dietrich
Coronavirus
Opinion
This article appears in the Saints Next Door feature series. View the full series. 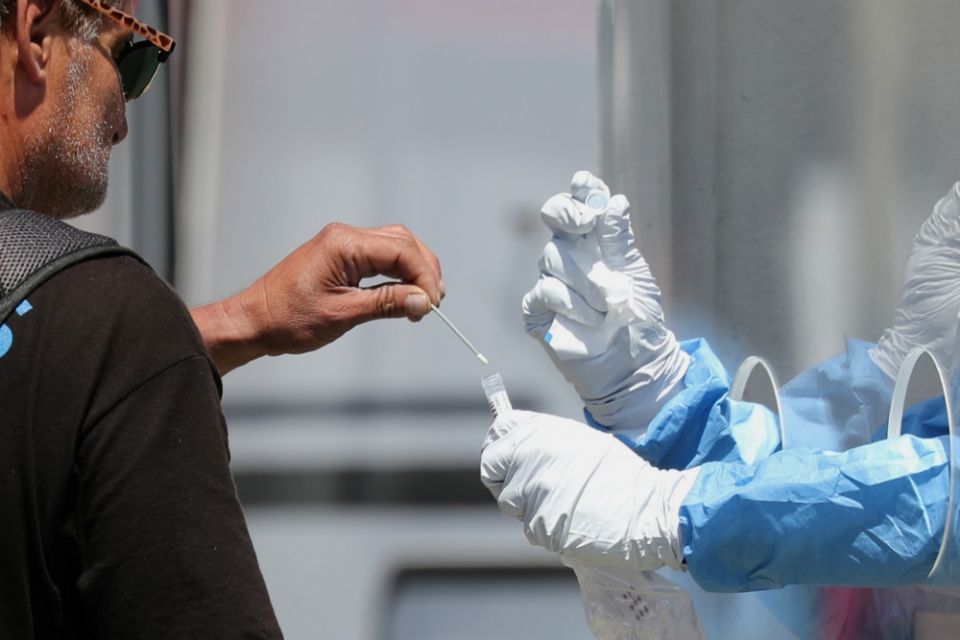 A homeless man in Los Angeles is tested for the coronavirus disease at a fire department testing station April 21. (CNS/Reuters/Lucy Nicholson)

Los Angeles — Our Catholic Worker food line stretches down the block. We are serving twice the number of our usual meals since the lockdown. Many of the larger Skid Row missions are on quarantine, and all smaller "street servers" have disappeared.

Today, I am on the line offering hand sanitizer to everyone. Clare Bellefeuille-Rice, a longtime Catholic Worker, has the job of "social distancing queen," trying to keep everyone 6 feet apart, not easy because folks on Skid Row are used to the "bums rush" rationale. First in line gets everything, last in line gets nothing, so they tend to crowd at the front.

Instead of the usual thud, thud, base of rap music, someone is playing over the loudspeaker on the side walk the slow '60s Smokey Robinson and Barry White sound of R & B. Across the street in Gladys Park, the evangelical preachers are broadcasting their usual come-to-Jesus sermon. Our soup kitchen dining garden, with trees and shade, fountains and flowers, with its casual convivial atmosphere, is closed.

Gone is the usual comradery and our smiling service that enhanced our otherwise simple meal of beans, salad and buttered bread. Instead, I am masked and gloved, as are most folks in line, and if they do not have a mask, Clare gives them one and in her most friendly imperious voice, insists that they put it on while in line. All comply, though some reluctantly. It is impersonal, anonymous, impossible to smile through my face garb.

I sit here holding out my bottle of hand sanitizer, watching our guests shuffling past me with their hands out to receive cleansing: dirty hands, clean pink hands, some caked with unwashed grime, soaked into the pores, creases and cuts, open hands palm as if begging to be sanitized. Some with long curled finger nails, unmanicured yellow old man's nails, only garden clippers could cut.

"Hey Jeff, remember when we were marching with all those shopping carts and Channel 5 was there, I was with you then? We OGs got 'a stick together," says Charlie as he wheels past me, the stump of his right leg covered in a dirty sock, cut off above the knee years ago.

"I do, it was a great demonstration," I shout, turning my attention toward Alex skimming down his skate board shot as he passes me saying, "Hero to the needy," recalling the time I threw my body under the wheels of an enormous dump truck to prevent city workers from confiscating the possessions of the homeless.

A battered pickup truck pulls up to the curb and Jan rushes over to bring its occupant two containers of food; later, a VW van pulls up and she delivers four more meals, yes, we do provide curbside service. Then a newer-model Porsche slips in to the open curb and hands Jan a small baggie. A ziplock bag containing a single hundred-dollar bill. Jan says, "She said she volunteered with us yesterday and wanted to drop this off."

Yes, this crisis does bring out the best in most folks who constantly drop off cases of bottled water, bags of bread, backyard fruit, and sometimes homemade chocolate chip cookies for the volunteers.

Walking past me with three containers of food, one of our guests shouts out, "You hippies are the best, especially since the lockdown started. All the food from the streets disappeared, and some of the missions closed, but you hippies are like the Pony Express, you always come through."

I keep thinking that most of Jesus' healings involved touch. He touched the leper, He touched the lame, He touched the man born blind, spat on the ground and touched the blind man with mud. Jesus touched the beggar and the outcast violating the religious sanctions of the day, and made them whole and complete, reunited with their community, no longer an outcast. But in this time of social distancing, sadly, there is no touching.

I officially retired last year, but have returned to "active service" with the advent of this virus after I reread Albert Camus' The Plague. Dr. Rieux, the novel's protagonist, already on the front lines himself, organized a civilian medical corps to care for the victims of the plague. He wrote: "All I maintain is that in this world there are pestilences and there are victims and it is up to us to, so far as possible, not to join forces with the pestilence."

Camus the atheist once called upon Christians to "speak out loud and clear ... in such a way that never a doubt, never the slightest doubt could rise in the heart of the simplest man" (Resistance, Rebellion, and Death). Camus believed that we should strive to be human, to serve the victims of the plague.

As I sit on my stool masked and gloved, anointing the most vulnerable victims of our city, of our society, I remember that Christ is not just the surname of Jesus. Rather, it means that he is the "Anointed One." And I anoint his presence in each one we serve.

Perspective | Skid Row anointing in the City of Angels

US bishops' meeting won't have a coronavirus vaccine mandate