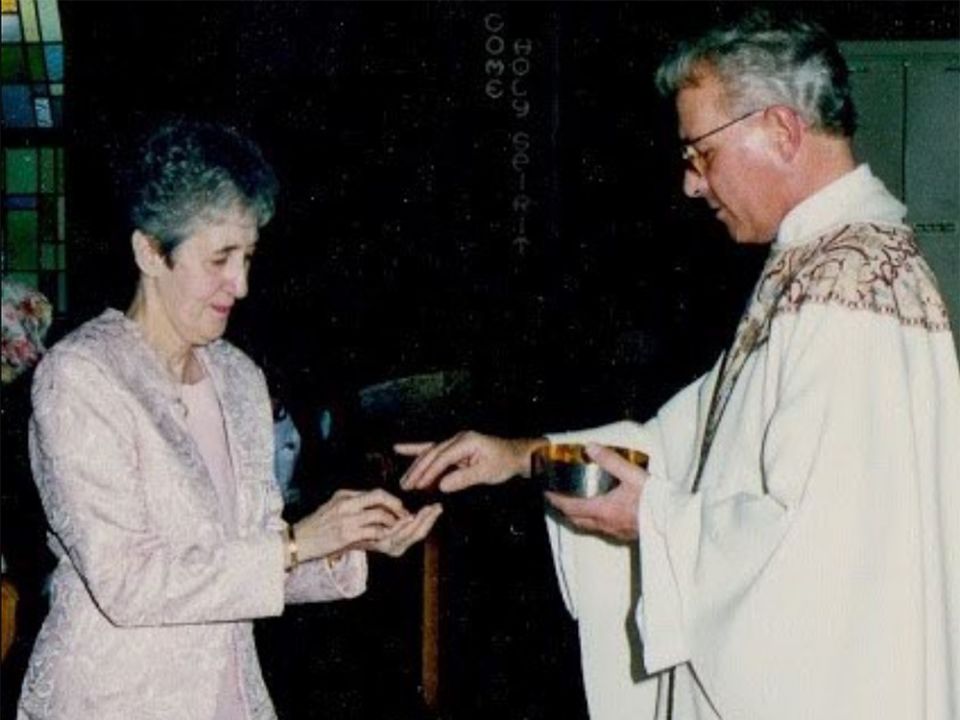 One of my favorite photos of Eucharist is of my mom receiving Communion at my brother's wedding from a priest who was like family to us. Such a moment was rare for my mother. Like many in her generation, she was raised to question her worthiness to receive the body of Christ.

My dad was baptized into the Carpatho-Russian Orthodox Church. His father's name is listed in the parish history as one who made a generous loan to help secure the property in 1937 for what became St. Nicholas of Myra Orthodox Church. After they married, and before most of the children were born, Dad became Roman Catholic as the spirit of Vatican II was taking hold of the church.

My parents' attitudes toward the reception of the Eucharist reflected the ways in which each was catechized. As age and varying infirmities made it more challenging to attend in person, they joined the vast community of those who worshipped each Sunday with the Passionists and their televised Mass ministry. Dad would sing off key, list the names of his loved ones at the general intercessions, and offer the sign of peace to whoever was within shouting distance.

There was no doubt that for my parents "spiritual Communion" was real and their weekly participation was faith-filled and nourishing. They passed on to the eternal banquet within six months of each other before the pandemic, but like so many others who have worshipped virtually for decades, their experiences have been absent from any discussions of Eucharist.

A purported draft of the U.S. bishops' Eucharist teaching, dated Sept. 24, 2021, was leaked in early November; by whom or for what purpose remains a mystery. In his analysis of the draft, liturgical and sacramental theologian Kevin Irwin astutely observed that by regarding Eucharist primarily in terms of "real presence" and "sacrifice," the draft "is framed in a Tridentine framework, not a Vatican II framework."

I would contend that the draft also demonstrates, in a number of ways, how disconnected the U.S. hierarchy has become from the realities on the ground.

The draft is oblivious to the spiritual ravages of the pandemic on people dying alone without access to the sacraments of reconciliation, of anointing and of Eucharist. There are no reassurances here for families.

Whereas for Pope Francis, the lived experience of the pandemic became source, content and context of his teaching ministry, in the draft it is a prop that is unnecessary to the main argument.

For example, the draft is oblivious to the spiritual ravages of the pandemic on people dying alone without access to the sacraments of reconciliation, of anointing and of Eucharist — as sustenance, as strength, as viaticum. There are no reassurances here for families, perhaps worrying about whether or not their loved ones passed in a state of grace, just fuel for harrowing questions that haunt those who were catechized in a time when an exaggerated internalized sense of unworthiness kept them from regular reception of the Eucharist.

The draft reflects insularity that arises from the kind of privilege that takes weekly and even daily Eucharist for granted, while other parts of the global church offer up their clergy so that the USA may be nourished. The drafters appear indifferent to the plight expressed in the 2019 final document of the Amazon synod: "Many of the Church communities in the Amazonian territory have enormous difficulties in attending the Eucharist. Sometimes it takes not just months but even several years before a priest can return to a community to celebrate the Eucharist, offer the sacrament of reconciliation or anoint the sick in the community."

This is a striking omission, considering that Francis released Querida Amazonia in February 2020. In the footnotes, he called out a practice that reinscribes global disparities in access to Eucharist: "It is noteworthy that, in some countries of the Amazon Basin, more missionaries go to Europe or the United States than remain to assist their own Vicariates in the Amazon region."

If the drafters are serious about the Eucharist pushing us to make preferential options for the poor, then the issues of access to the Eucharist must be addressed from perspectives that take into account our responsibilities in relation to the pressing needs of the global church.

The idea that a eucharistic teaching and revival are needed at this time was not discerned through a process of synodality. The drafters even admit this concern is theirs, but not necessarily ours.

The draft reveals an insistent resistance to the synodal direction Francis invites all who are the church to embrace. Synodality is a commitment to a mutual process of encounter and accompaniment. Done effectively, it cultivates a mature and participatory faith at every level. It invites investment from all, and demands that leaders listen deeply in order to discern the next moves in our journeying together.

Synodality does not operate from the top down. It literally entails a sharing of the road, a process that takes time and trust. The process can even be messy precisely because it pays attention to the ground, the margins and the vulnerabilities of the travelers.

The idea that a eucharistic teaching and revival are needed at this time was not discerned through a process of synodality. No venues were created, no surveys in any language were commissioned by the bishops to ask Catholics in the U.S. what is troubling or burdening our daily lives in this traumatic time.

The drafters even admit this concern is theirs, but not necessarily ours: "Although many of the faithful appear to have had their faith and their desire for the Eucharist strengthened by such a long separation, we worry that others, having lived without Mass for so long, may have become discouraged or accustomed to life without the Eucharist."

The draft includes Blessed Carlo Acutis among its saintly models with a devotion to the Eucharist. A 15-year-old "computer geek" who died of leukemia in 2006, he was beatified during the pandemic in October 2020. Acutis' understanding of the evangelizing power of the internet coupled with his devotion to the Eucharist make him a most appropriate saint for a virtual age.

Unfortunately, the drafters miss an opportunity to develop this dimension of worship and community-building that the pandemic forced us to entertain in creative and life-sustaining ways at the local level. Acutis' labors remind us that virtual and digital technologies are pastoral gifts that need further exploration and investment.

In a few places, the drafters use words of Francis to prooftext their agenda. One notable instance is the deployment of Evangelii Gaudium at the end. Inserting "the love that is displayed preeminently in the Eucharist" in the middle of a series of quotes by Francis calling the baptized to be evangelizing agents and missionary disciples based on their encounter with God's saving love implies that this emphasis appears in the pope's text. It does not.

In fact, Eucharist appears only 11 times in Evangelii Gaudium, once in cautioning against exclusion from sacraments, and a number of times in what amounts to a much-needed tutorial on the word and preaching during the Eucharist.

The inattention to the Liturgy of the Word in the draft is conspicuous in light of the pope's focus in the apostolic exhortation they reference. As Francis observed, "We have long since moved beyond that old contraposition between word and sacrament. The preaching of the word, living and effective, prepares for the reception of the sacrament, and in the sacrament that word attains its maximum efficacy."

More than 755,000 dead from COVID-19 in this country alone and an uncertain future merited more than a discourse on sin, unless the sin was obstinacy with respect to vaccines and masking. What will be remembered when we look back on these traumatic COVID-19 years? Will we recall that Francis produced Fratelli Tutti, and the U.S. bishops produced a letter born, in part, from a desire to exclude? Will we remember how Francis called us to share our dreams to shape a better day together while our bishops imposed a revival that they decided we needed?

Catholics in the U.S. surely deserve better in these troubling times. Perhaps we long for a teaching that serves as a balm to sooth our anxieties or as a fire that stirs our hearts to act for the common good as if our very lives depended on it?

We surely seek a teaching that grows out of deep listening to the real questions of these times. We deserve bishops who will sit still with us, where we are, on the ground made sacred because we are the body of Christ. 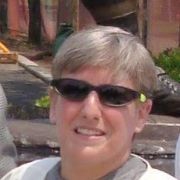 Carmen M. Nanko-Fernández, a self-described Hurban@́ (Hispanic and urban) theologian, is professor of Hispanic theology and ministry and the director of the Hispanic Theology and Ministry Program at Catholic Theological Union in Chicago.

Your thoughts on the title of the upcoming enycylical, 'Fratelli tutti'