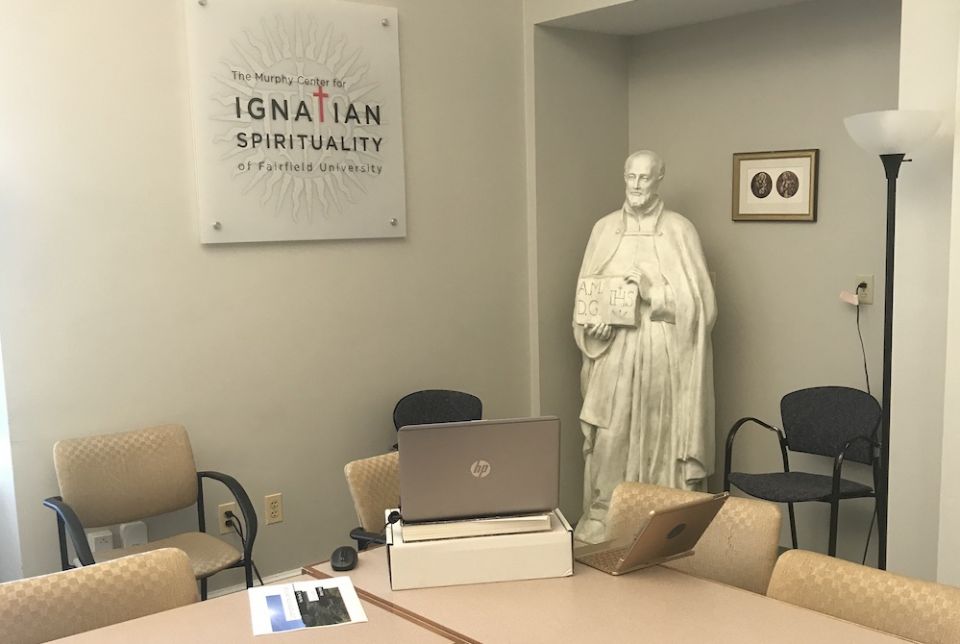 A room in the David J. Dolan House on campus of Fairfield University in Connecticut, where Marcy Dolan Haley, assistant director of the Murphy Center for Ignatian Spirituality, and one priest at a time have been conducting Ignatian Pilgrimage Virtual Retreats, adapted during the coronavirus pandemic (Marcy Dolan Haley)

Ali Famiglietti discovered spiritual direction during her senior year at Fairfield University in Connecticut. She needed course credit to fulfill her religious studies requirement, so she enrolled in "Students' Ten-Week Ignatian Experience," offered by the Murphy Center for Ignation Spirituality. The semester-long course provided an overview of the Spiritual Exercises and included spiritual direction.

"Covid felt like everything was torn asunder," Famiglietti says. "Spiritual direction has given me structure and a way to evaluate what I'm really feeling. Just knowing that and cultivating that sense of self-awareness makes me feel like the world is not going to fall apart every second."

Separate from campus ministry, the center offers programming that invites the students, faculty and staff at Fairfield into a deeper understanding of Ignatian spirituality. They offer retreats, diocesan programs and spiritual direction for 200 to 300 people at any given time, including 50 to 75 students. The center is currently working with Bridgeport Hospital to respond to the pandemic by offering spiritual direction and spiritual care to health care professionals virtually and free of charge.

In this time of COVID-19, the offerings have expanded even further. While the center's leadership long wanted to offer digital programming, the shelter-in-place order spurred them to finally start.

"The closing down of programs within the diocese and on campus led us to do something we knew we were needing to do for a long time — that is, to offer programs in digital forms," Jesuit Fr. Gerry Blaszczak, Fairfield's vice president of mission and ministry, told NCR.

Blaszczak worked with Marcy Dolan Haley, assistant director of the Murphy Center, to construct an eight-week Ignatian Pilgrimage Virtual Retreat. Originally planned to be a diocesan program, the virtual retreat opened instead to the wider public: From March 24 through May 12, participants met on Zoom for one hour each week on Tuesday afternoons. Only Haley and one priest were present in the physical building of the Murphy Center to respect social distancing rules.

The format of the retreat was straightforward: They opened with prayer, a Jesuit offered a 30-minute teaching on an element of Ignatian spirituality, and then Haley led a 10-minute prayer practice. Topics included contemplation, love of God, freedom and attachment, and magis, a Jesuit concept of doing more for Christ and others. Prayer experiences covered suscipe, an Ignatian formulation of radical self-giving, and other contemplative practices such as centering prayer, imagining prayer, and lectio divina, a way to reflect on the Scriptures.

Participants attended with their devices muted and their cameras off until the end when they had the option to unmute their devices and share with the larger group.

Attendees flooded in — 150 people registered, and around 75 devices (with couples behind some of them) logged on each week from Connecticut, California, Florida and even Italy and Ireland.

Google searches for "prayer" have surged worldwide in step with the increasing cases of COVID-19, according to a European researcher. (CNS)

"Not least now in the pandemic, people are searching for an immediate, direct experience of God's presence," said Blaszczak. "The hunger is immense. The response that we have had affirms the importance of paying attention to this deep spiritual hunger. We don't claim to have esoteric knowledge. We don't have a magic key. But our programs focus on the reality that God is already present in and acting in people's lives."

For Lyn Brignoli of Greenwich, Connecticut, the virtual retreat has been a space of equal parts community and spiritual nourishment. At 75, Brignoli lives alone; her adult children and grandchildren live with their families out of state. Aside from an aide who comes to help her run errands, texts from her friends in Ghana, and FaceTime chats with her grandchildren, Brignoli is largely in solitude.

Most of the time, she doesn't mind. She's a writer by nature, and she considers herself a contemplative. However, when she received the invitation to the retreat, she immediately subscribed even though she had never been to a program at the Murphy Center before.

"It was a knee-jerk response, I didn't have to think about it," Brignoli said.

Brignoli misses her church on Sunday mornings, filled with people and colored with beams of light streaming through the stained glass windows. As she attended the eight sessions of the retreat, she felt herself transported from her home.

"When you connect virtually, there are limitless possibilities," said Brignoli. "It takes me beyond just my little neighborhood here. Now I'm in Fairfield!"

Although Brignoli is a convert to Catholicism and only vaguely knew about St. Ignatius and the Spiritual Exercises, she said that she found the "very deep and very exquisite" retreat to be a not-too-technical introduction.

"The whole experience was one of feeling very connected," Brignoli added. "We were all feeling something very deep together." 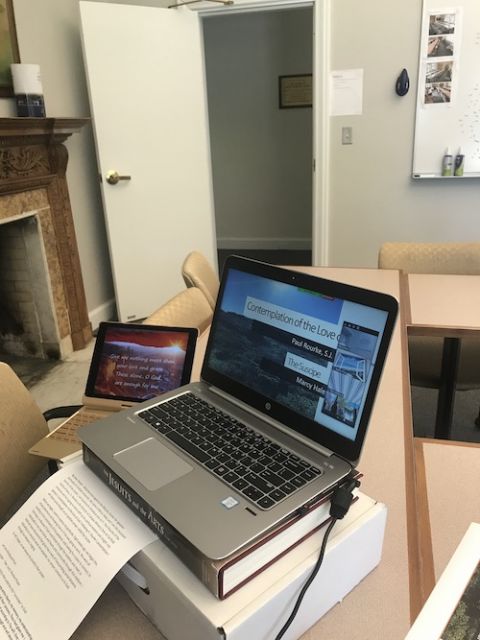 William Deigan, also 75, found the retreat to be a meaningful experience of delving deeper into his own spirituality. Deigan and his wife, who live in Fairfield, also attended all eight sessions. Before COVID-19, the pair attended weekly Mass at Fairfield University's Egan Chapel.

Deigan first learned about the Murphy Center from pamphlets in the back of the chapel, but he hadn't participated in any programs before the retreat.

"The thing that made it very relevant was the theme of the presence of God, that God is very present with us particularly in this time [of the pandemic]," Deigan said. "God is present everywhere; he's present within us, around us, in individuals, and in nature. In that presence is the presence of love."

For Deigan, being more aware of this presence meant acknowledging others in the grocery store, extending grace to those who seem to be in a rush, and appreciating nature around him while he's on morning runs in a nearby park.

The university's study abroad office is housed in the David J. Dolan House, the same building as the Murphy Center, but Maddux wasn't able to participate in programming that was held there in-person. When she saw that the Ignatian retreat was offered online, she thrilled at the opportunity to attend.

"That was very helpful given the repercussions of the pandemic," Deigan added. "When you think about living in the present moment, you value each day."

For Joanne Maddux, program director of the Fairfield University Florence study abroad program, the retreat launched at just the right time. The first wave of COVID-19 had just hit in Italy where she has lived since 1991. She was experiencing family issues. And she had been yearning to deepen her faith for the past few years.

"It felt very much like an invitation, which made me feel very comfortable," Maddux said. "It wasn't necessarily sitting down to doctrine. It was a very good balance between moments of prayer and reading and brief explanations. I found it very inclusive."

The first installment of the Ignatian Pilgrimage Virtual Retreat ended on May 12, and Haley initiated a second Ignatian retreat with new content. Its first session May 19 had Jesuit Fr. Tom Fitzpatrick offering a Zoom presentation on sexuality and prayer. This current retreat pilgrimage lasts through June 30. (People can sign up for one or all remaining sessions here.)

Moreover, the Murphy Center has ambitions beyond the Tuesday afternoon series. Haley dreams of bringing the Ignatian Pilgrimage Virtual Retreat to people in assisted living facilities and rehabilitation centers.

"Wouldn't it be lovely to be able to provide this to people who are not able to leave their rooms, and yet desire to have a deeper connection with others and with God," Haley said. "That's a real opportunity for us. This is something that we see that really works." 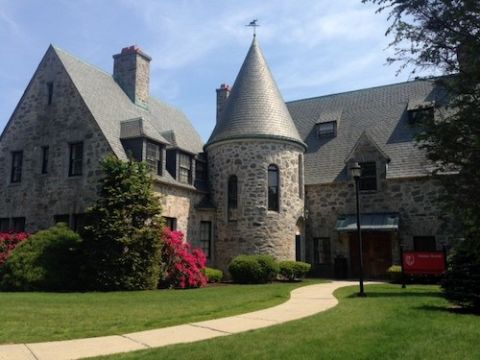 The David J. Dolan House on campus of Fairfield University in Connecticut is home to the Murphy Center for Ignatian Spirituality and the university's study abroad offices. (Marcy Dolan Haley)

As Haley wrote in an email to participants, "We began this virtual adventure not knowing if or how it would work but we knew God was calling us to be creative and reach out." Eight weeks later, with high attendance and rave reviews, Haley feels that the program was successful.

"We are a ministry that thrives on being in person with each other, and this has been an opportunity for us to see if God could break through isolation and see if God could meet us in our own homes," Haley said. "We discovered that God transcends physical place and time."

For anyone who's interested in joining from anywhere in the world, Haley says that the virtual door of the Murphy Center is open.

"I hope people realize that you're not alone out there," Haley said. "We'll find you. We'll get you connected."