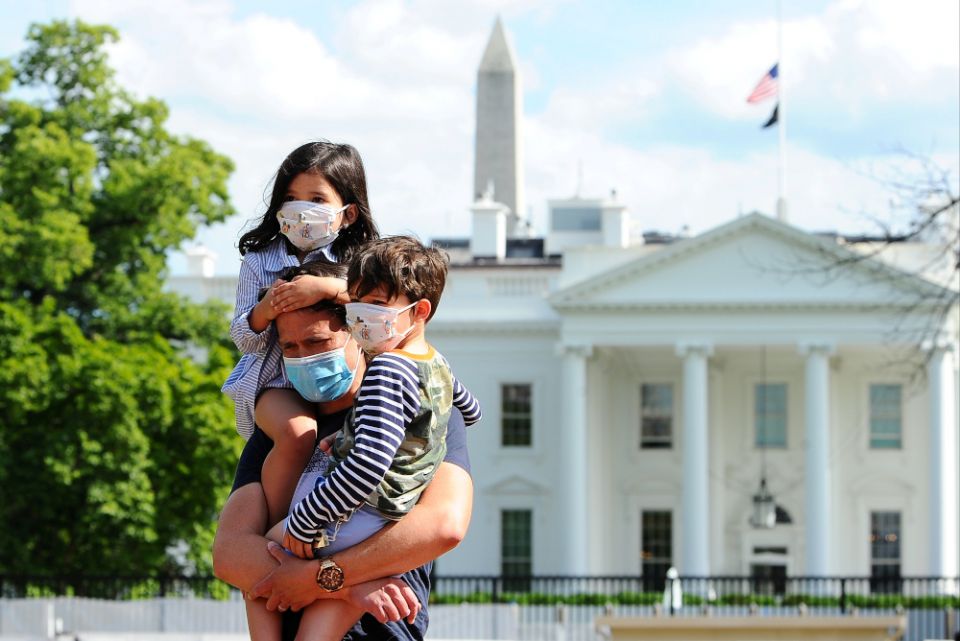 A family in Washington poses for a photo near the White House May 23 during the coronavirus pandemic. (CNS/Reuters/Mary F. Calvert)

Washington — The Washington-based American Immigration Council said restrictions issued by the Trump administration during the coronavirus pandemic are being used to implement immigration limitations White House officials have sought for a long time.

These limits could have wide-ranging repercussions, particularly for immigrant families, and eliminate legal pathways into the U.S., the council said.

In a panel presentation announcing its May 27 report titled "The Impact of COVID-19 Across the U.S. Immigration System," the organization outlined directives from the White House, such as halting asylum applications at the southern border as well as the process to resettle refugees into the country; increasing deportations, including deportations of children; and suspending visas that would have allowed for the reunification of families.

Administration officials have said the steps were necessary to stop the propagation of the coronavirus.

Panelists, however, said the measures long had been priorities for the administration, but the White House could not easily pursue them until the pandemic. Some of them had been tied up in the nation's courts.

The Trump administration has used the pandemic to justify travel restrictions and a suspension of immigration to the United States, said Royce Murray, the council's managing director of programs, who moderated the panel.

"The Trump administration has used the COVID-19 outbreak to pursue restrictive policy changes that it has sought to implement for many years," added Jorge Loweree, the council's policy director.

That response will have a "cascading impact with consequences that will be felt for years to come," Loweree said during a conference call with reporters.

Some would-be migrants won't be able to be reunited with family members in the country, and dramatically fewer individuals will be able to seek humanitarian help from the U.S., given the changes, he said.

While the government took some common sense measures regarding immigration to halt the spread of the coronavirus, it has in other ways failed to create sensible solutions and been "woefully indifferent to human life" in other ways, such as when it has refused to release migrants from U.S. detention centers during a pandemic, risking their exposure to the virus, and leaving asylum-seekers stranded in dangerous border towns in Mexico not allowing them to come in, Loweree said.

It has instead used the pandemic "to justify aggressive changes to our immigration systems," he said. That includes what amounts to ending asylum at the southern border, fundamentally altering the family immigration system, ending the diversity visa lottery, sharply reducing the overall number of noncitizens that can come to the U.S., Loweree said.

Ur Jaddou, director of a project called DHS Watch, which monitors U.S. immigration agencies within the U.S. Department of Homeland Security and the Department of Justice, said the changes have affected thousands inside and outside of the United States: U.S. consulates in other countries and immigration courts have closed; in-person meetings with officials from U.S. Citizenship and Immigration Services, or USCIS, have been halted.

Many immigrants use USCIS to check in for appointments regarding a variety of immigration situations, including citizenship ceremonies, which have been canceled, even though many could take the oath for citizenship via video, Jaddou said.

Aaron Reichlin-Melnick, policy counsel for the organization, said that while there seems to be a significant drop in levels of people in detention, it seems to have happened because of an increase in deportations, which have not stopped, and have in some cases ended up essentially exporting the virus to vulnerable countries.

Guatemala, for example, says at least 20% of its COVID-19 cases have resulted from deportees who contracted the virus in U.S. detention centers.

Reichlin-Melnick said some of those countries have been threatened with sanctions by the White House if they refuse to take in the deportees. Countries such as El Salvador, however, whose president has been friendly with President Donald Trump, said he would take in asylum-seekers, and, in what seemed to be a quid pro quo, received ventilators from the U.S. and was promised financial aid.

Guatemala, where the president blocked U.S. flights with deportees coming in, did not receive similar offers of help.

Guatemala says at least 20% of its COVID-19 cases have resulted from deportees who contracted the virus in U.S. detention centers.

In an April 24 briefing, Michael Kozak, acting assistant secretary for the U.S. State Department's Bureau of Western Hemisphere Affairs, said, however, that deportations were the safer choice.

"The reason we were so keen to work with partner nations to get their citizens back home, was precisely so as not to leave them in immigration detention facilities where they're — been pressed together and cannot easily do the kind of social distancing that they should be," he said. "In other words, that they would be much safer to be back home in their homes with their families, and not in a closed environment like that."

Just across the southern border, migrants find themselves "in a dangerous state of limbo," Reichlin-Melnick said, as they wait in makeshift camps because they're not allowed to seek asylum in the U.S.

In desperation, some parents are sending their children alone across the border, hoping they will be allowed to enter, but the children have instead been sent back to their home countries, even if there's no family on the other side to take them in.

The New York Times reported May 20 that hundreds of cases involving the deportation of children from the U.S. to other countries have been handled since the pandemic began because, as happens in the other situations involving immigration, a 1944 statute gives the executive branch the power to block foreigners from entering the U.S. to prevent the spread of disease.

The American Immigration Council, along with other immigrant advocacy groups, has filed a lawsuit against the Executive Office for Immigration Review and Immigration and Customs Enforcement. The suit seeks to "halt these dangerous practices" that have been allowed because of the 1944 law and ensure that government agencies respond to the pandemic "in a way that meets the needs of the detainees" and those who represent and work with those communities, as well as guarantee the due process "enshrined in the Constitution."