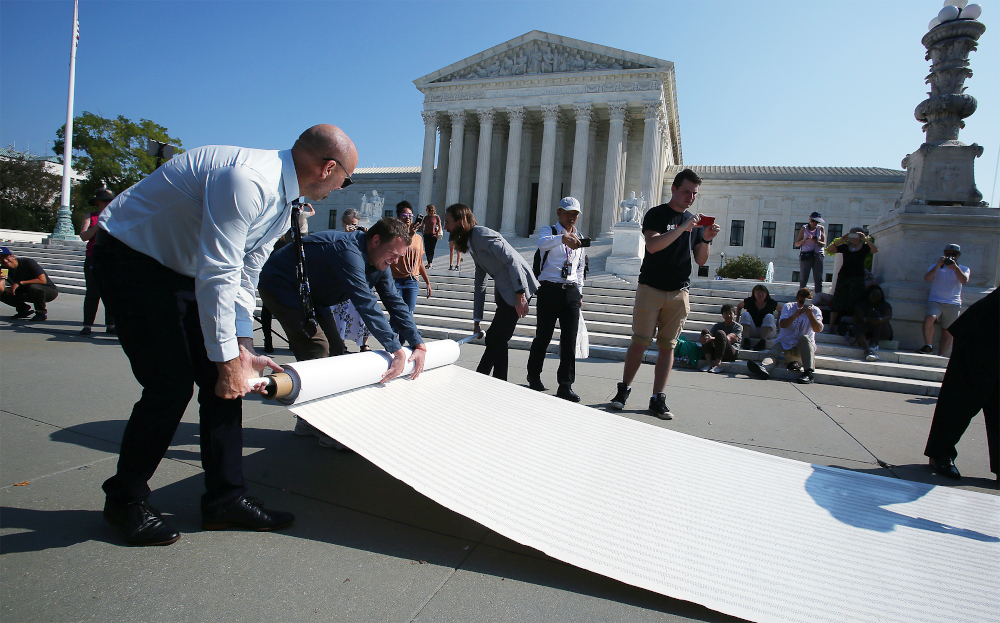 Pro-life leaders unfurl a petition in front of the U.S. Supreme Court in Washington Oct. 1, 2019, with more than 250,000 signatures calling for the court to overturn Roe v. Wade. (CNS/Tyler Orsburn)

A group of national pro-life leaders gathered outside the Supreme Court Oct. 2 to release a petition bearing 250,000 signatures that calls on the U.S. Supreme Court to overturn its 1973 Roe v. Wade and Doe v. Bolton decisions.

The group urged the court to use two cases — from Louisiana and Indiana — this term to overturn the companion decisions that legalized abortion virtually on demand nationwide.

"We are honored that 250,000 people have joined us in calling on the Supreme Court to overturn Roe," said Allan Parker, president of the Justice Foundation, a pro-life nonprofit organization spearheading the effort.

Named "The Moral Outcry," the petition is based on the premise "that U.S. citizens do not accept abortion as the law of the land," said organizers, and "represents many who wish to see the innocent lives of children in the womb protected under the Constitution."

The day that pro-life leaders gathered outside the court, the justices held a behind-closed-doors conference on the upcoming term, which opens Oct. 7. The court announced Sept. 16 that the justices would discuss possibly taking a challenge to a Louisiana law requiring abortion providers to have admitting privileges at local hospital. Opponents say the law could lead to the shuttering of abortion clinics in the state altogether.

The U.S. Court of Appeals for the Fifth Circuit upheld the law in 2018. The high court also could decline to not hear arguments and let the lower court decision stand, allowing the law to take effect.

The high court also could take a second look at a case from Indiana, one that it ruled on in part May 28. It blocked a state law barring abortions based on a fetus' sex, race or disability, while letting a requirement fetal remains be buried or cremated take effect.

"Every child, born or pre-born, has the inalienable right to life given by God," Kristan Hawkins, Students For Life of America president, said in a statement supporting the petition.

She said her organization "stands with the hundreds of thousands of signers who call on the Supreme Court to do the right thing and protect the lives of the pre-born."

"The pro-life generation will not rest until abortion is abolished and made unthinkable," she said.

After other speakers addressed the crowd outside the court, including Fr. Frank Pavone, national director of Priests for Life, the group presented the signed petition to court officials.