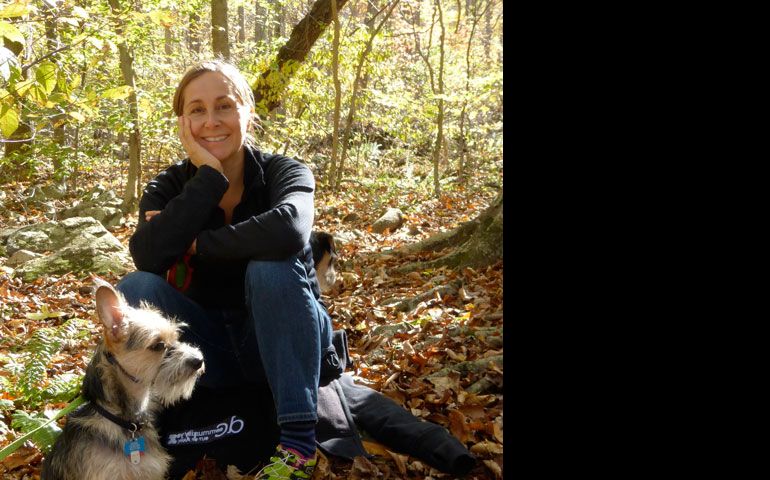 As the gorging season is upon us, Thanksgiving to the Yule, news from the food world is not especially tasty. The Centers for Disease Control and Prevention reports that contaminated edibles cause 3,000 deaths and 128,000 hospitalizations annually. The numbers are up from previous years.

In foods from eggs and chicken meat to cantaloupes and mangos, salmonella and listeria are the major dangers. Then came a warning from the World Health Organization that "sufficient evidence" finds that processed animal flesh can cause cancer. The message: Cool it with hot dogs.

Into this stomach-wrenching morass comes Annie Mahon, an ordained lay Buddhist minister, licensed massage therapist, yoga teacher and author of Things I Did When I Was Hangry: Navigating a Peaceful Relationship With Food.

Of the dozen or so books I've read this past year, this was the most affecting. With confessional honesty, it is about a woman ploughing through the rough patches and often rocky paths of life and finding a measure of peace by realizing, "There is no way to get rid of our cross, but there is a way to bear it more lightly. The first step is to recognize that we are much more than our burden."

Mahon writes in prose laced with glistening phrases and mingled with lines from Wendell Berry, Thich Nhat Hanh, Alan Watts, Rumi and, of course, Siddhartha Gautama. Her thralls were the common tensions of a food fight: the daily battles against weight gain, binging, flab and fat, scales and the other war zones of eating disorders where achieving body peace can be as iffy as peace of mind.

"Hangry," she argues, "is when you get hungry and therefore angry. Think of it as being stressed out or angry because of one's obsession with food and eating -- or not eating."

Raised in a farmhouse in a suburb of Detroit, Mahon enrolled at the University of Michigan in 1979. By then, she was a veteran of the food wars.

"Food became my enemy," she writes, "and I became more and more isolated from my family and friends. My binging and purging was a secret that I couldn't tell anyone. I even tried to keep it a secret from myself by shutting down my sensations as much as possible. Watching TV and reading magazines like Seventeen and Cosmopolitan made me think that if only I were as thin as those women, everyone would love me and I would be forever happy and at peace. ... The only way I knew to avoid feeling fat and unworthy was to stop eating and feel some control, or binge eat and feel nothing."

Mahon was among the 8 million sufferers of eating disorders, including anorexia, which has the highest death rate of any psychiatric illness. The majority are girls and women ages 15-24, according to the documentary "Dying to Be Thin."

One of the spiritual forces that gradually freed Mahon from her fears and inner confusions was a commitment to Buddhist meditation and mindfulness. She learned the arts from Nhat Hanh, the Zen master. She devoured his books and developed a friendship after attending his retreats from Vermont to France's Plum Village.

In Washington, D.C., she joined a sangha -- a community of meditators -- that sat every Thursday night. After 15 years, she believes that "the goal of mindful cooking and eating is so much more than physical well-being. As my relationship with food has become more peaceful, food can now be a healing force rather than something forbidden, avoided, or despised."

I've known Mahon and her husband, Paul, since their daughter Hanna was in one of my high school classes some 10 years ago. Hanna went on to Middlebury College and now works for a labor union in New Haven, Conn.

Because Hanna had so many gifts -- her inviting innocence and gracious ways, her soulful appetites for learning and self-discovery -- I found myself wondering how that all came about. I have a clue now, as found in the pages of Mahon's enlightening book and its magical message that mindfulness and meditation are positives that can counter any kind of negative compulsions, whether before, after or during a meal.

'The Monuments Men' wonders: Is art worth a life?

Author mines Bible for images to describe the indescribable

The drunkalogue: a parade that goes nowhere