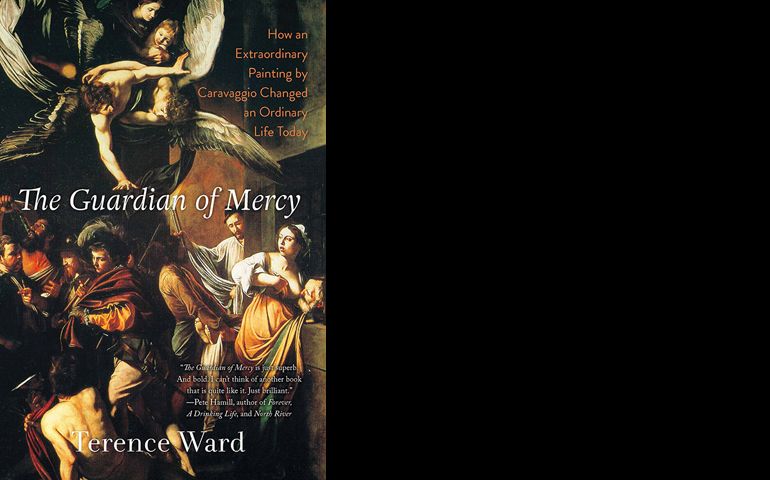 "The Guardian of Mercy," by Terence Ward. (Arcade Publishing)

If Pope Francis wanted a single image to illustrate the special Year of Mercy that is the current focus of his ministry and, indeed, the theme at the heart of his pontificate, he could do no better than choosing an underappreciated masterpiece by the thrilling Italian artist known as Caravaggio.

In fact, the 400-year-old canvas, an altarpiece in a Naples church titled "The Seven Acts of Mercy," may represent the perfect combination of the man -- or, rather, two men -- and the moment: a brilliant painter with a scurrilous reputation who was striving for redemption, and a popular pontiff struggling to make the church more welcoming to outcasts.

"A dramatic convergence has taken place between Pope Francis' teachings and Caravaggio's message," writes Terence Ward in his new book on the painting, titled "The Guardian of Mercy."

Even Ward's book represents a stroke of providence in that he started it years ago after wandering into the church where the painting has hung for centuries, only to have his laptop with the first manuscript stolen.

The delay meant that the publication of Ward's book coincided with the pope's Jubilee Year of Mercy, and a revolutionary pontificate that would seem to dovetail so easily with Caravaggio's boundary-pushing style.

'Among the worshipers of the depraved'

Michelangelo Merisi was born in 1571 in northern Italy and grew up in the town of Caravaggio -- hence his later moniker. He was orphaned at 11, just as he began an apprenticeship in an artist's workshop. He was known as a hothead early on, however, and had to leave Milan for Rome around 1590, reportedly after getting in trouble for wounding a police officer in a street fight.

But Caravaggio's remarkable talent always seemed to save him.

Whether painting a basket of fruit or a fortuneteller, Caravaggio used darkness and light to convey such realism on a canvas that he quickly became the toast of the big-money Roman art scene -- a bustling and prestigious market in which the Roman Catholic Church and its cardinal-princes were among the chief patrons.

Yet if hefty commissions were the lure, it was in the predominantly religious images that Caravaggio was paid to paint that he may have found his true vocation, as well as his greatest fame. His series on the life of St. Matthew, for example, had by 1600 made him arguably the most controversial, and most imitated, artist in Italy.

(One scene from that cycle, his famous "Calling of St. Matthew," has been cited by both Pope Francis and his immediate predecessor, Pope Emeritus Benedict XVI, as an inspiration. "Among the great painters, I admire Caravaggio; his paintings speak to me," Francis has said.)

Some of Caravaggio's other Gospel-themed masterpieces from this period were "The Taking of Christ," "The Conversion of St. Paul" and "The Penitent Magdalene," paintings that became touchstone representations of those New Testament episodes and characters. His naturalistic style and theatricality also served him particularly well in depicting graphic scenes of martyrdom and violence, such as "The Crucifixion of St. Peter" and "Judith Beheading Holofernes."

In interpreting these religious narratives, Caravaggio seemed to find the perfect vehicle to express not only his bravura talent and technique (he was famous, or infamous to many of his peers, for painting directly from life onto canvas without preliminary sketches) but also his own intense, if turbulent, spirituality -- a struggling sinner who can't seem to stay out of trouble.

Artistically, that made for a potent combination that was, however, sometimes a bit much for his church patrons; they occasionally found his sensibility leaning closer to sensuousness than devotion, forcing Caravaggio to rework some commissions to make them more palatable to religious authorities.

In the end, however, it was Caravaggio's unbridled temper rather than his dramatic painting style that would lead to his downfall.

One contemporary description of Caravaggio recalled that "after a fortnight's work he will swagger about for a month or two with a sword at his side and a servant following him, from one ball-court to the next, ever ready to engage in a fight or an argument, so that it is most awkward to get along with him."

His reputation was such that when he killed a young man in 1606, perhaps accidentally, he had little chance to defend himself -- Caravaggio soon had a price on his head and the authorities at his heels. So he fled to Naples, where he initially enjoyed the protection of the influential Colonna family, and in the space of just a few months painted some of his greatest works, including "The Seven Acts of Mercy."

Yet he still felt uneasy about his safety and he bolted again, this time to Malta, where he continued to paint, and fight, and in 1608 he was again forced to run, first to Sicily and then back to Naples, where he was gravely wounded in an attempt on his life.

Desperate to find sanctuary and a pardon, in the hot summer of 1610 Caravaggio set out for Rome with three paintings in tow that he planned to give to the powerful Cardinal Scipione Borghese, nephew of Pope Paul V, who alone had the power to pardon Caravaggio and finally provide him a respite from his travails.

But Caravaggio didn't make it. The circumstances of his death have never been clear, and the artist's body has never been definitively identified. But sometime during a stopover in a port city in Tuscany, Caravaggio died, or, perhaps, he was killed. He certainly had enemies, and the three paintings -- two of which disappeared and have never been found -- were worth stealing. He was just 38.

History did not treat Caravaggio very mercifully, either: His once soaring reputation quickly hit the skids after his death, and even the 19th-century aesthetes who "rediscovered" Italian painting disdained Caravaggio as a lowlife who dragged religious art into the gutter with him.

As Ward notes in his book, the English critic John Ruskin lumped Caravaggio "among the worshipers of the depraved," and Ruskin's contemporary, John Addington Symonds, said the artist portrayed "sacred and historical events as though they were being enacted in the ghetto by butchers and fishwives."

It was only after World War II that the rehabilitation of Caravaggio began (even if rumors of his scabrous personal habits persist), and in recent years his popularity has reached unimagined heights. He has been called the father of modern painting and the inspiration for film noir. With relatively few canvases extant, and no drawings, every Caravaggio exhibit is a blockbuster and every chapel that houses a Caravaggio becomes a destination.

Except for "The Seven Acts of Mercy."

The painting was commissioned shortly after Caravaggio arrived in Naples by a group of pious nobles who were dedicated to caring for the poor. They wanted an altarpiece for the church of Pio Monte della Misericordia that reflected their mission to carry out the seven works of mercy set out in the Scriptures: feeding the hungry, giving water to the thirsty, sheltering the homeless, visiting the prisoner, clothing the naked, healing the sick and burying the dead.

Eager for the cash, Caravaggio finished the work in less than four months, and he managed to represent each of the works of mercy in a single frame -- an astonishingly compact composition that continues to reveal its secrets to persistent viewers.

The images are arresting, and themes sometimes overlap: an old man in prison is suckled at the breast of a young woman, a saint divides his cloak for a naked man and comforts a beggar on the ground, an innkeeper welcomes a pilgrim.

The main problem was finding the painting. The Pio Monte society that commissioned the work stipulated that it remain in the church, and even as Caravaggio's reputation was revived in recent decades, "The Seven Acts of Mercy" was largely left behind because it was never part of a museum's collection or any special exhibition outside Naples.

Moreover, few would wander down the warren of Neapolitan streets to the church the way Terence Ward did one day in 1998. Stunned by what he found in the painting, he was just as captivated by the custodian of the church who stood guard in virtual solitude: Angelo Esposito, a onetime city sewer worker who in one of the city's typically dysfunctional reorganizations was shuttled to look after this backwater masterwork.

After years of contemplating the image, Esposito had come to appreciate and understand "The Seven Acts of Mercy" in ways few scholars have, and Ward's book recounts Esposito's own transformation in relationship to the altarpiece, along with the tangled past and present of Naples itself, and the life of Caravaggio. "The poet of hope," as the painting's guardian calls him.

It makes for a compelling narrative, and it also gets to the heart of Caravaggio's appeal -- to modern eyes and, perhaps, to Francis and his fans. That's because Caravaggio drew from life, and street life in particular, and his saints are peasants; all of them are baptized but unwashed -- even the angels "look more like Neapolitan street kids," as Ward writes.

Little wonder that his book is blurbed by the likes of Pete Hamill, the famed chronicler of New York's streets, and that at a recent book party for Ward, Bible scholar Elaine Pagels praised the author and artist ("It's a story of grace," she said) while William Vendley, head of Religions for Peace International, recounted how much the story moved him.

"Irony is too meek a word for how mercy can penetrate its antithesis," he said. In San Francisco, California Gov. Jerry Brown -- a former seminarian -- and his wife attended a lecture on the book.

"What Caravaggio does is to bring common men and women into his paintings and make them sacred," Ward said at the New York book launch. "Which gives hope for us, no?"

'He's the artist of the poor. Our artist!'

Will Francis join in this chorus of hosannas?

As with almost everything about Caravaggio, and "The Seven Acts of Mercy," there is no simple answer, and much debate.

Esposito and the Pio Monte society in Naples that still owns the painting seem to expect that this "pope of surprises" might pop down from the Vatican any day. "They're just waiting for the call," Ward said.

And why not? Francis loves Caravaggio, and mercy. But the pope is busy, and dedicating a day's travel for a painting, even this Caravaggio altarpiece, is asking a lot.

A suggestion by Italy's president to bring the painting to Rome for an exhibit for the Year of Mercy where Francis — and many, many others — could see it sparked intense polemics. The head of the Pio Monte society was in favor, but other Neapolitans protested, loudly, and the idea to move the painting outside the city for the first time ever was quashed.

Some alternatives have been proposed, such as re-creating the painting as a "multisensory" workin Rome in which each act of mercy would be re-created for viewers to see and hear and touch. But that doesn't seem nearly as attractive as contemplating the original.

"In the end, his art isn't about bishops in silk robes giving handouts to the needy," Esposito tells Ward at one point. "It's about simple people helping one another. He's the artist of the poor. Our artist! There's no one else like him. It's all there! … What more do you want?"

In 'The Farewell,' a family unites to guard the unspoken truth