'Honk for Jesus' provides an uncomfortable reflection of the Black church 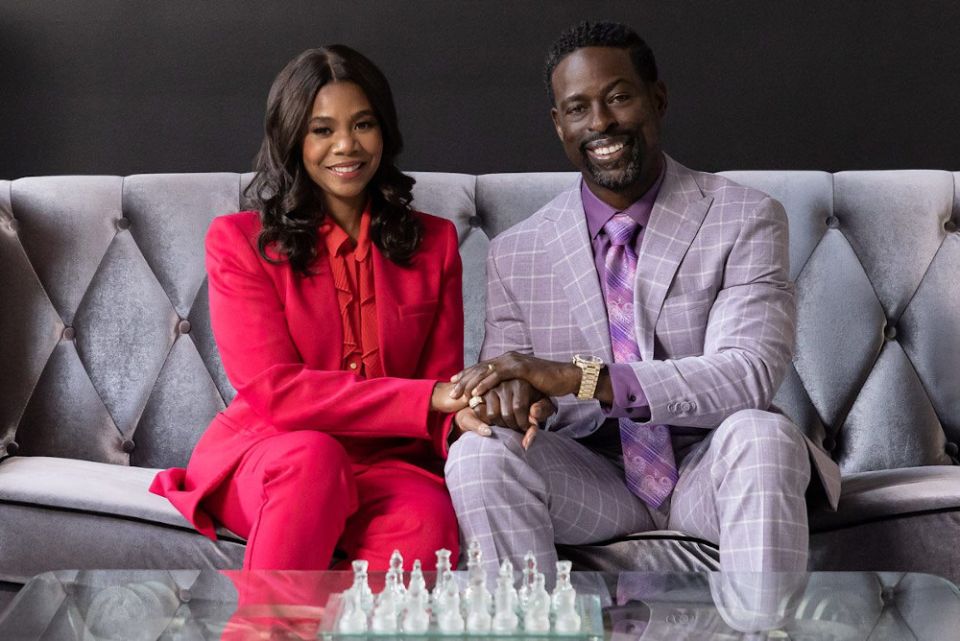 Regina Hall and Sterling K. Brown star in "Honk for Jesus. Save Your Soul." (Courtesy of Focus Features)

If you've spent any considerable length of time in a traditional Black church context, you've heard this. It's usually said by a preacher when they know a sermon is hitting a little too close to home and the typical "Preach, bishop!" or "Take your time, pastor!" call-and-response has gone silent. "It's tight but it's right," many would say as they watch parishioners shift in their seats while hearing "Thus saith the Lord."

When "Honk for Jesus. Save Your Soul." premiered in theaters and on Peacock on Sept. 2, many had no choice but to say "ouch." The dark comedy, starring Regina Hall and Sterling K. Brown, is supposed to be satirical in its depiction of a megachurch pastor and his wife as they attempt to resurrect themselves after a fall from grace. Yet the greatest strength of this "mockumentary" is that it's not parody at all — rather, it's one of the most accurate depictions of contemporary Black church culture I've seen.

Written and directed by freshman filmmaker Adamma Ebo, "Honk for Jesus" chronicles the efforts of Lee-Curtis Childs (Brown) and his wife, Trinitie (Hall), as they work to restore Wander to Greater Paths Baptist Church to its former glory. A sexual misconduct scandal has forced the thriving institution, which once boasted 25,000 members, to shut its doors. Believing the people need to see their miraculous restoration, Lee-Curtis enlists a documentary film crew to follow them as they journey toward an Easter Sunday reopening.

With Ebo as writer-director and Daniel Kaluuya as producer, the film is executive produced by Jordan Peele, known for his films "Get Out" (which starred Kaluuya), "Us" and this summer's "Nope." "Honk for Jesus" continues in the same vein of Peele's social commentary and critique. Prosperity gospel, ego and manipulation have become prominent ministries in Black churches, leaving congregants further impoverished while the pastor and his family seem to be the only ones prospering.

Everything about the first family must reinforce God's favor because, if they are blessed, then their congregation is blessed too. The continuous flow of material wealth isn't by chance; the first family hustles incredibly hard for it. Hence, the opening credits are punctuated with Lee-Curtis preaching about how he is the personification of God's goodness while Three 6 Mafia raps, "Ever since I can remember, I've been working these h*es and they better put my money in my hand."

It doesn't take much time to recognize that Lee-Curtis' plight is eerily similar to that of the late Bishop Eddie Long, a megachurch pastor who was accused of sexual misconduct in 2010 and died in 2017. But "Honk for Jesus" isn't about Long as much as it uses the scandal as the backdrop to explore what's happening in today's church. That's why we don't just see him in the film. We see so many Black men, pastoring congregations of all sizes, who believe their own hype and will stop at nothing to maintain some semblance of power. And we see their wives, women who believe it is their calling to make themselves smaller so their husbands can appear bigger. 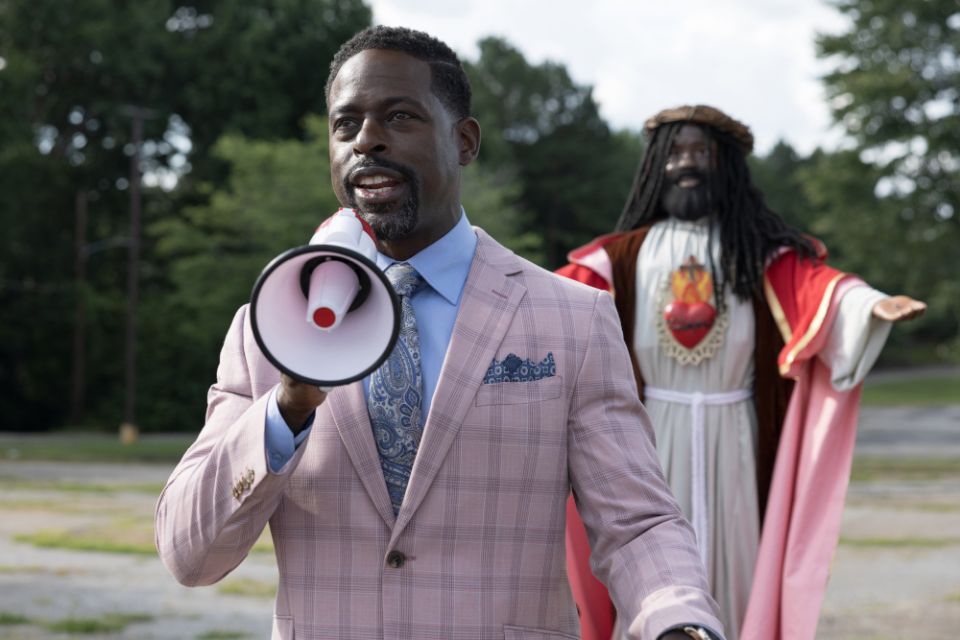 Sterling K. Brown stars as Lee-Curtis Childs in in "Honk for Jesus. Save Your Soul." (Steve Swisher/© 2021 Pinky Promise LLC)

The Childses have lost everything and it's unclear why. Sexual misconduct? Seriously? Pastors cheat every day. Like rappers, professional athletes and other celebrities, no one really expects a Black man with wealth and prestige to be faithful — even if he is preaching the gospel. So what would make the members of Wander to Greater Paths Baptist Church any different? As "Honk for Jesus" moves along, it becomes apparent Pastor Childs' sexuality is in question. Now it all makes sense. Wander to Greater Paths' members don't find refuge in Heaven's House Baptist Church, with Pastors Keon and Shakura Sumpter — played by Conphidance and Nicole Beharie — without reason. They left in droves because, for many, homophobia is still one of a Black Christian's greatest virtues.

And even though he's lost it all, there remains a remnant who believes the wrong Lee-Curtis has done can be overlooked because he has done so much right. After all, those boys were "grown enough," no criminal charges have been filed and souls have been saved thanks to Pastor Childs. While the devoted flock's forgiveness of Lee-Curtis and the community's disregard for his victims are what perpetuate cycles of abuse and violence, it is important to note he never apologizes. Do pastors even do that anymore or do they simply dismiss any form of accountability as hate and the devil conspiring against them?

Lee-Curtis Childs is exactly who we think he is: a broken man hoping the façade he hides behind will one day make him happy. But he is not happy and neither is his wife, who is perhaps the most important person here. The hoops Trinitie Childs jumps through and the ways she contorts herself to protect her husband from destructive forces, including himself, make her both victim and accomplice. Trinitie is complicated, wanting to be fully seen for the totality of her sacrifices to ensure her husband's — and by extension, her — success. 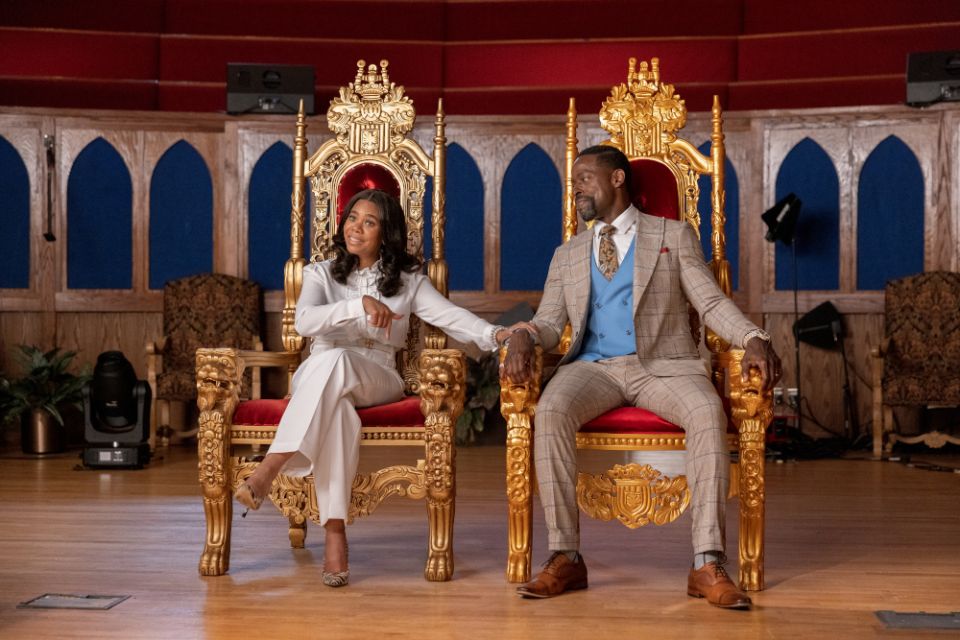 We don't know all that Trinitie knows but we do know she knows enough to make a different decision — one that prioritizes her dignity and self-worth. She goes without respect, recognition and intimacy as Lee-Curtis so recklessly mishandles what they have built together. In her documentary confessional moments, Trinitie tells a painful truth: It does take a lot to be a first lady. Perhaps more of us should start asking why.

A quick scroll of social media timelines provides vastly different reviews of "Honk for Jesus." Over on Twitter and Instagram, where many Black Christians who are farther along on their deconstructionist and progressive faith journeys reside, the film is being praised for its accuracy, candor and truth-telling. On Facebook, the predominant home of older Christians and those who believe in preserving the image of the institution, the film is being blasted for making the church look bad.

And both camps are right, which is what makes "Honk for Jesus" so great. In many ways, its satire is a mirror — a hilarious and horrific one. Throughout the film and especially in the final scene, today's Black church sees itself in all of its conflicting glory. The ugly can no longer be hidden. We all see it. If the church looks bad, maybe that's because it is. Ouch. 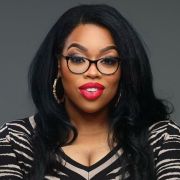 Candice Marie Benbow is a public theologian and the author of Red Lip Theology: For Church Girls Who've Considered Tithing to the Beauty Supply Store When Sunday Morning Isn't Enough.

When movies put Satan onscreen, the devil is in the details