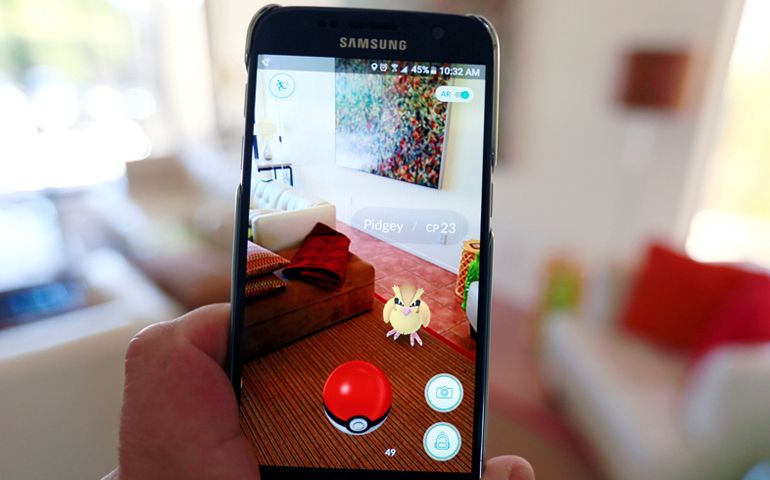 The augmented reality mobile game "Pokemon Go" by Nintendo is shown on a smartphone screen in this photo illustration taken in Palm Springs, California on July 11, 2016. (Reuters/Sam Mircovich/Illustration)

If your church is suddenly overtaken by millennials with their heads stuck in their phones, you can thank Pokemon.

Yes, Pokemon. The Nintendo-owned franchise, which produced colorful cards and later video games, is back -- this time luring young adults out of their apartments and into museums, parks and places of worship.

How? Technology, of course. Pokemon's newest iteration is a free augmented reality app that brings its now-adult fans' fantasies to life.

The app uses players' phone GPS to locate where they are, then makes Pokemon appear on the phone screen in real-life locations so players can "catch" all 151 virtual creatures.

The app has become a viral sensation about teens and young adults, overtaking Tinder on Android and on course to beat Twitter in daily users. Millennials are walking around with their phones, finding "PokeStops" and "Gyms" at local places of interest: libraries, parks, art galleries, subway stations, zoos and more.

But, as some gamers are discovering, virtual Pokemon can also be found at several churches, too.

How do you get six 20-something guys to sit on the steps of your church? Your church is a gym in #PokemonGo. pic.twitter.com/TAYTqXrZKB

The game's PokeStops and Gyms, where players can gather in the real world to capture and battle their virtual Pokemon, are based on user-submitted locations. And one of these Gyms is at 701 SW 12th Street in Topeka, Kansas: the home of the virulently anti-gay Westboro Baptist Church.

When a user named LoveIsLove took the Gym over, it sparked a back-and-forth battle between LGBT Pokemon players and the hate group.

Someone took @WBCsigns as a #PokemonGO gym and is guarding it with a Clefairy named LOVEISLOVE
Go home, we're done pic.twitter.com/P9LfqUfzxw

The Westboro Baptist Church's response, "recruiting" both Jigglypuff and Pikachu to "deal with the sodomite Loveislove Clefairy" seems to have only drawn more pro-LGBT youth to the game.

Church attendance -- or at least skulking around church parking lots -- isn't the only unintended consequence of the game.

Some players have warned about racism and suspicion people of color may face while exploring their neighborhoods for Pokemon, while others have found the game to help with weight loss. There are reports of armed robbers using the game to lure victims, and a 19-year-old Wyoming resident said she found a dead body while looking for Pokemon.

If your church is designated as a PokeStop or Gym, The Wardrobe Door blog has an eight-step guide to ride the wave.

Unfortunately for churches trying to draw in youth, it doesn't look like there's a way to register a location as a PokeStop or Gym yet. But turning your church into a "charging station" for players, like Maine's Columbia Street Baptist Church did, might do the trick.

Young people flock to the convent in search of Pokémon