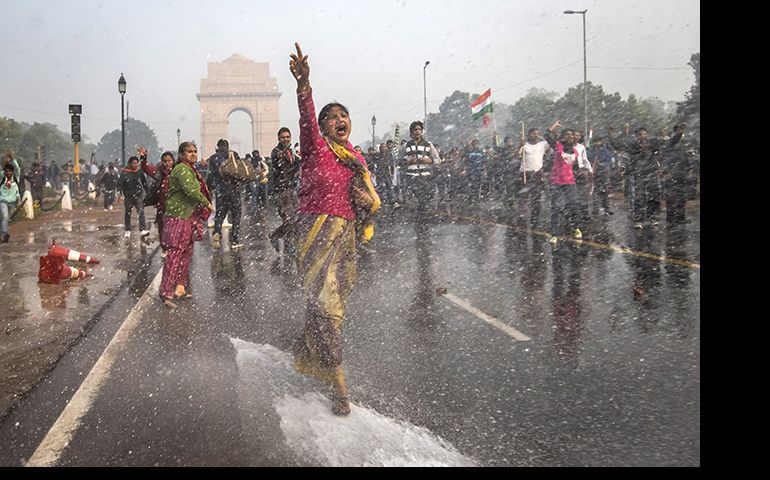 Scene from "India's Daughter," showing women protesting rape culture in India and being sprayed by waterhoses wielded by the authorities. (Leslee Udwin)

Jyoti Singh was a 23-year old medical student in Delhi, India, who went out to see "The Life of Pi" with a young male friend on the evening of Dec. 16, 2012. On the way home, around 8 p.m., they got on a private bus as people do in Delhi. But on that bus were five men and one 17-year old male who gang-raped Jyoti for over an hour as the bus kept going. They assaulted her so severely that there really was no hope of survival. Her friend was beaten; both were tossed naked from the bus and left to die.

After others stopped to look and move on, a man heard their cries and called for help. Jyoti's parents are poor, and they sold everything they had so she could become a doctor and open a clinic in their ancestral village. They came immediately. Jyoti was flown to Singapore in hope of treating her extreme condition but two weeks after the attack, she died from her injuries.

Jyoti had so wanted to become a doctor that she asked her father for the money he had saved for her wedding. Even then, she had to work two jobs to pay her school fees. She had just graduated and was raped the night before she was to begin her six-month internship.

This rape in Delhi, which is already known as India’s rape capitol, sparked student protests that were met by police with water canons and spraying tear gas. Women and men had had enough of India's archaic patriarchal culture that allowed men to mistreat any woman they believed were upsetting the accepted norm of female behavior. Whether their efforts will effect long-term change is still to be determined.

If anything positive can be said to have come out of the horror of this event, it is the awakening among women and men alike in India and the world to the issue of violence against women. This particular event has been a huge turning point. We hope the film will spark a persuasive plea for change and the establishment of a new norm of freedom and respect for women the world over. Gender inequality, the disease of which the offenses against women are the symptoms, is a global issue.

The most telling and horrifying aspect of the film to me, beyond the description of what these men did to Jyoti, is the shared attitude of the perpetrators and their defense lawyers about their control over women. They are convinced that women belong in their place in the home, whether hovel or house, and when they cross that boundary it's open season for any male to abuse and assault them. The bus driver, Mukesh Singh, is interviewed extensively and at the end of the film and says that before when a woman was raped, she would be left alive because she would be too shamed to talk. Now all that will happen is that she will be raped and killed.

I don't think I am overstating it, but the explicit pro-rape attitudes of the perpetrators and their attorneys are not unlike the attitudes underlying how women are treated in the U.S. when they report being raped.

Documentaries that prove this are films such as "The Invisible War" about rape in the military and Congress’ unwillingness to legislate for justice and "It Happened Here" about rape on college campuses and the school's unwillingness to prosecute. Author Jon Krakauer's Missoula: Rape and the Justice System in a College Town published earlier this year, "illuminates the human drama behind the national plague of campus rape." It's a very tough, frustrating read because justice is hard won, if at all.

"India’s Daughter" is the daughter, mother, sister, niece, and grandmother of India and of every country in the world where gender inequality that allows rape and violence toward women is the norm that is, everywhere.

When is enough, enough?

The film, already shown in the United Kingdom and banned in India, airs in the United States on PBS Independent Lens starting Nov. 16. See http://pbs.org/independentlens/indias-daughter for more information.