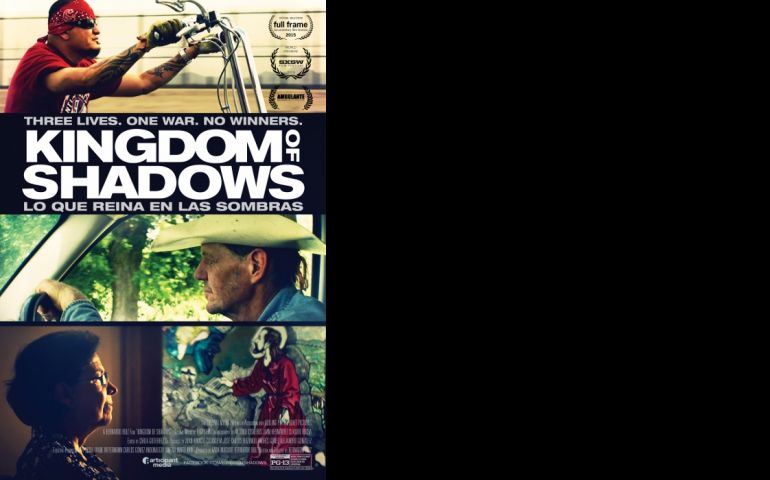 Poster for "Kingdom of Shadows" documentary. (Courtesy of Participant Media)

For years I've been watching and reviewing movies on Mexican cartels that act with impunity due to government corruption and the futility of the war on drugs in the United States. The atrocities in Mexico include kidnapping, murder, mass murder, dismemberment, burning, hanging, the torture of thousands of innocent people (in Ciudad Juarez it was women for many years), and government complicity through intimidation, infectivity and collusion. Some of these films are Gregory Nava’s fictionalized 2006 "Bordertown," about a journalist who is killed because he reports on the disappearance of women in Ciudad Juarez beginning in the early 1990s; the 2103 documentary "Narco Cultura" about the celebrity of cartel outlaws in the U.S. and Mexico; and to this year's "Sicario," a fictional story about how the U.S. government agencies fuel the drug wars in Mexico and Colombia that dramatizes the blatant failure of the war on drugs right in front of our eyes.

Now Participant Media's latest documentary, "Kingdom of Shadows," tells this same story through three people: a Mexican nun, a Texas rancher and a federal agent. Sr. Consuelo Morales of Monterrey works with families whose loved ones have been murdered and disappeared, guiding them through the hugely futile legal process (prosecutors always say, "we have no more lines of inquiry" to pursue) while still leaving them with some hope. Texas rancher Don Harry Ford, Jr. describes how he began smuggling marijuana in the 1980s for fast money to pay off debts -- before the cartels took over the drug smuggling business. From the U.S. law enforcement side comes from Oscar Hagelsieb, who first worked undercover and then became a senior Homeland Security Officer along the border. As the son of undocumented immigrants, he knows firsthand why young people become involved in drugs: poverty and lack of opportunity.

The two Mexican crime syndicates profiled in the film are Los Zetas and the Gulf Cartel. Los Zetas started off as a special branch of the Mexican army, trained at the School of the Americas (now called Western Hemisphere Institute for Security Cooperation), when then went rogue in the late 1990s to become a criminal organization with advanced technological skills. The Gulf Cartel seems to be the oldest drug trafficking organization in Mexico.

"Kingdom of Shadows" squares the failed U.S. war on drugs with the failed Mexican war on drugs proclaimed by Mexican President Felipe Calderon in 2006. Sister Consuelo speaks of the 1,500 troops Calderon sent into Monterrey to battle the cartels and how the army picked up hundreds of innocent young people as suspects instead, most taken away and never to be heard of again except for a few escapees who lived to tell the story.

How will it all end? Rancher Ford says the illegality of drug smuggling was appealing. Officer Hagelsieb says the U.S. has to look to itself because the cartels are delivering to a willing market (more meth now because of the legalization of marijuana in some states), and Sister Consuelo, who offers the comfort of faith, says, "If victims [families] can keep on going even though their hearts are broken, we will keep going, too," against the biggest challenges of impunity and corruption.

"Kingdom of Shadows," written and directed by Emmy-nominated Bernardo* Ruiz​, is another important prophetic film from Hollywood and a call to action. It is gritty, haunting and somehow hopeful. The courage of these three people to go on camera and tell the truth inspires. Let it not be for nothing.

"Kingdom of Shadows" opens in New York, Los Angeles, San Diego on Friday, Nov. 20 and will be available on video-on-demand as well.

*An earlier version of this story misspelled the first name of Bernardo Ruiz and referred to him as an Emmy winner.

Francis to Mexican youth: 'Jesus would never ask us to be hired killers!'

What tradeoffs should we make to achieve a saner society?