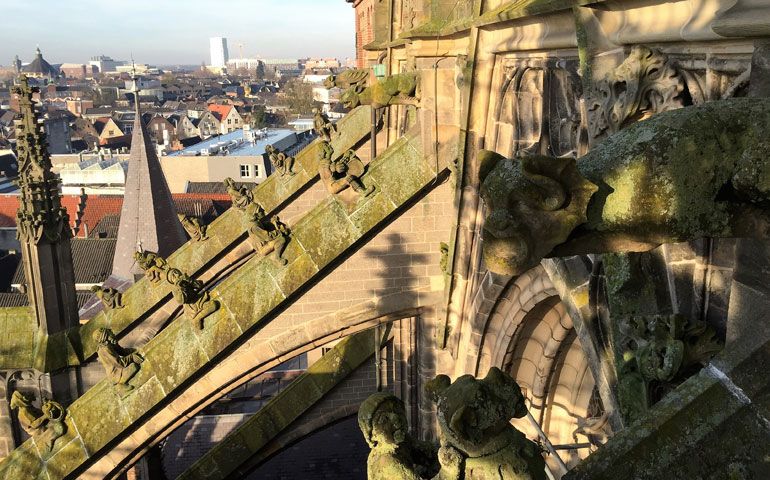 Gargoyles look down on figures on the flying buttresses of St. John's Cathedral in Den Bosch, Netherlands. (Menachem Wecker)

Den Bosch, Netherlands — The sweeping views of the medieval city of 's-Hertogenbosch are among the rewards for trekking 200-something feet up the temporary scaffolding affixed to St. John's Cathedral, the largest Roman Catholic church in the Netherlands.

The panoramic views of the city, colloquially Den Bosch ("the forest"), represent an unfolding cityscape in which modern buildings and construction cranes are embedded within iconic 17th-century (and earlier) Dutch architecture. The marriage of old and new also punctuates the cathedral, which was begun in the 13th century and assumed its Gothic façade a century later. It has since undergone several restorations and suffered in a few fires.

One of the church's most striking features, which arrests viewers both from ground level and more dramatically as they climb the scaffolding, is the sculptural program: 96 figures attached to the flying buttresses. (A Gothic architectural invention, flying buttresses look like external ribbing, which support high-ceilinged churches.)

Here, too, centuries are bridged; a new addition of an angel, which stands near the other sculptures, wears jeans and holds a cellphone to its ear.

The 96 sculptures in question include artisans playing instruments and demonic figures, all looking up the inclined buttresses as if petitioning heaven. Atop the buttresses, however, unsympathetic gargoyles look down disapprovingly on the figures pining for salvation. Like all gargoyles, they were designed as a drainage system to empty rainwater from the cathedral roof, but these do so directly upon the figures. The obvious suggestion is that the drenched sinners will find no ticket to paradise.

The grim view of sin and its discontents articulated in the buttressed figures was part of the medieval Dutch Catholic milieu. It also so evokes the diabolical designs of painter Jeroen van Aeken -- better known by his assumed name, Hieronymus Bosch, after his native city -- that there is speculation that Bosch was at very least involved in designing the figures, a cathedral tour guide informed a group of visiting journalists.

Nineteen of the 24 known paintings by Bosch, as well as some of some two-dozen drawings, appear in the major retrospective "Jheronimus Bosch: Visions of a Genius" at Den Bosch's Het Noordbrabants Museum (through May 8). Even a cursory look at the exhibit demonstrates the Den Bosch-born painter's Catholic identity.

Among the works in the show are:

Countless other religious themes and subjects surface in the exhibit as well.

Take the "Haywain Triptych" (circa 1515), from the collection of Madrid's Prado Museum. In the central panel of the painting, Bosch responds to the Flemish proverb (as the Prado website recounts): "The world is like a hay cart, and everyone takes what he can."

Indeed, among the takers in Bosch's painting is a monk with rosary beads in his hand, lounging on a throne drinking beer, while everyone else (including four nuns) labors with the hay.

"Apparently things don't change," a cathedral tour guide, Peter van Spaandonk, said of the criticism Bosch leveled against the church in the painting.

Living at the end of the 15th century, Bosch (circa 1450-1516 -- the exhibit coincides with the 500th anniversary of the painter's death) experienced the events leading up to the Protestant Reformation, particularly in the Netherlands. "He saw what was happening," van Spaandonk said. "He was living in a very special period."

However critical Bosch was of the actions of certain Catholics in power and their corruption (the painted monk is a stand-in), he was not critical of the theology and he identified strongly as a Roman Catholic, van Spaandonk insisted. Proof of that comes from Bosch's membership in the Confraternity of the Illustrious Lady.

The motto of the brotherhood, which was founded in Den Bosch in 1318, was "Sicut lilium inter spinas," deriving from Song of Songs 2:1, which means, "As a lily among the thorns." (A more accurate translation of the Hebrew might be a "rose," although "lily" is generally the English.) The lily, of course, refers to the Virgin Mary.

"We are not very illustrious, but the Virgin is. She is the lily and we are the thorns," said Karel Noordzy, current confraternity president.

Bosch was an active member of the confraternity, and its ledgers show that he paid his dues regularly and on time. The brotherhood at the time was strictly Catholic, which also speaks to Bosch's faith, but after Protestants took over the city in the 17th century, a Protestant governor of Den Bosch, Johan Wolfert van Brederode, insisted that he would join.

It took a year, but the brotherhood membership was set to be 18 Catholics and 18 Protestants, with a goal of promoting friendship and understanding between the two.

"That's still the goal," said the president, noting that the society today has 60 Catholic and 60 Protestant members. (Women had been members in the past; they haven't been since 1642.)

In the circa 1495-1503 "Ecce Homo," created by Bosch's workshop and now in the collection of Boston's Museum of Fine Arts, Jesus is presented on a podium with his hands bound and a crown of thorns on his head. He is surrounded by guards, and beside him, Pontius Pilate (crowned and wearing a sword) points at Christ.

In the foreground, throngs of people -- some in military attire -- appear to already have judged Jesus unfavorably, and in the background, Jesus can be seen lugging the enormous cross on his back.

On the inner face of the two wings of the triptych (which appears in the exhibition), Bosch's workshop depicted the patrons, Peter van Os, a member of the brotherhood, and his wife. Peter van Os is shown kneeling with hands clasped in prayer; St. Peter, identified by the key he holds, stands behind him. Van Os has the brotherhood's insignia affixed to his robe. His wife, dressed in a nun's habit, kneels in prayer with St. Catherine of Alexandria behind her. The wheels and sword, the instruments of St. Catherine's martyrdom, appear beside the saint.

The insignia ties not only Bosch to the brotherhood at the time, but Noordzy wears the same identification today. "We still have that insignia," he said.

The brotherhood also had its own chapel at St. John's Cathedral -- the church with the gargoyles and buttresses -- and it arranged and paid for Bosch's burial. That, too, suggests Bosch's connection to the church. "He always kept his Roman faith, even as he was critical," said van Spaandonk, the tour guide.

So what was a Catholic -- if indeed Bosch was involved in the design of those gargoyles denying entrance to heaven to the men looking up at them -- doing representing heaven as unattainable to everyone? He meant no such thing, van Spaandonk cautioned, noting the demons who appear alongside the men.

"You have to be careful in your life, and not live like a demon," he said.

The horrors and hells of Hieronymus Bosch