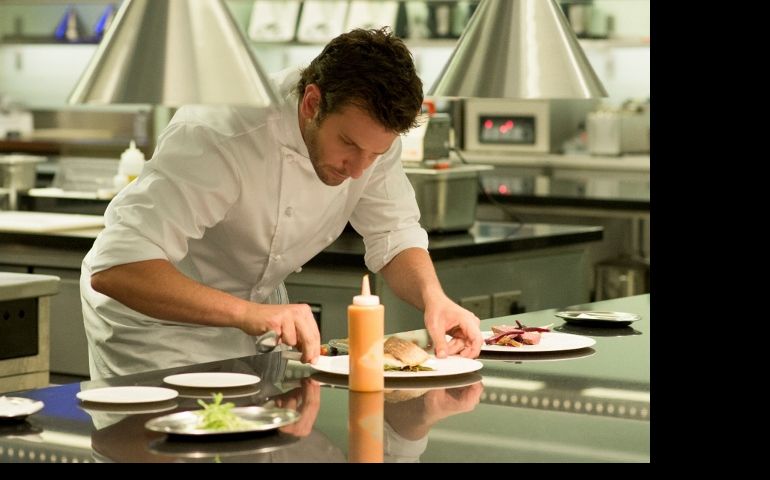 Bradley Cooper stars in a scene from the movie "Burnt." The Motion Picture Association of America rating is R - restricted. (CNS photo/Weinstein)

Adam Jones (Bradley Cooper) is a washed up, two-star Michelin chef on a mission of self-redemption. After leaving the ruins of a self-destructed career, wrecked because of his womanizing, partying and drug and alcohol addiction in Paris, he goes to New Orleans with a self-imposed penance: to shuck a million oysters.

If nothing else, Adam Jones is a man of great extremes. He keeps track of the number of oysters in a little notebook, and when he’s reached his goal, he walks away from his job and flies to London. Once there his goal is to obtain his third Michelin star, the highest rating.

He sets about gathering his former cooking school "friends" together along with some new talent, including Helene (Sienna Miller), a single mom who already knows Jones' explosive reputation. It seems everyone in London knows Jones' story, how he so disappointed Jean Luc, his teacher, who took him in and treated him like a son when he showed up in Paris at age 19. He actually has very few "friends" left.

Jones convinces Tony (Daniel Bruhl), who has long had a crush on Adam, to get his dying father to back a new restaurant at the family's hotel. He agrees as long as Jones goes for weekly drug testing from Dr. Rosshilde (Emma Thompson), a psychiatrist. She offers Adam advice as she draws his blood and invites him to meetings, but he'd rather go it alone.

As the team of chefs prepares to open, they are on the lookout for Michelin reviewers who are likely to appear unannounced. Jones makes everything hard on his team; in fact, they are barely a team. Old resentment seethes just under the surface because some of Jones' fellow chefs from Paris fell from grace when he did, too. New anger flares up when Jones refuses to admit that he cooks in an old style, that new techniques have been developed since he left Paris. Add to this the two thugs from Paris, who keep showing up, demanding that Jones pay his old narcotics bill. Tony's dad offers to pay them off, but Jones refuses.

I think I have seen most of the food movies that have been made in the last 25 or so years, and there were elements of "Mostly Martha" and "Big Night" (my two favorite food movies) as well as "The Hundred Foot Journey" in "Burnt." The cinematography, however confined to a kitchen, is lush. Adam Jones is at the center of this film about transformation, and the fast-moving scenes of food are a gorgeous contrast to his proud individualism, burning soul, foul mouth, and hard head. The film's key themes, however predictable, are family, community, change, creativity, humility, maturity and mercy. "Burnt" is a good film to watch to start the Year of Mercy. There are a few references to hell in the film, as well, and it works on many levels.

Other film critics haven’t had much good to say about this film, ably directed by John Wells, and I wonder if there’s a lack of generosity there. Is Bradley Cooper in too many films? "Burnt" is a more than just an OK film, folks. I was taken into the story and the art and craft of cooking in London, that only in recent years has become known for more than boiled vegetables and dried roast (I lived there for two years in graduate school; we’d go to a small Indian restaurant or Chiquito’s Mexican Restaurant on Leicester Square for tasty food; school, pub and English restaurant fare were nothing to write home about back in the day.)

Thinking ahead to Thanksgiving, "Burnt" made me want to be a better cook in my community and to present dishes in creative ways, even if it's only my special, simple recipe for mashed potatoes.

Peel the potatoes and boil until soft. Trim the scallions top and bottom, then finely chop the bulbs and the stems (until the stems are too tough; they are softer nearest the bulb.) Do not cook the scallions.

Drain the potatoes. In the same pot, while potatoes are still piping hot, add one stick (1/4 lb.) of butter and half of the sour cream, a dash of salt and a dash of pepper (to taste), and mash. I use a hand masher to begin with, then I use a hand-held electric mixer, adding in only enough milk and sour cream to make the potatoes hold their peak. Add the chopped scallion and blend by hand; leave a small amount of the scallions aside to use later. Don’t over mix or the potatoes become gooey.

Spoon into a casserole dish. Make peaks across the top by touching the surface and lifting with a tablespoon or small spatula. Add pats of butter across the top, about a half-inch apart between peaks. Sprinkle the leftover scallions lightly (sparingly) over the top and dust with paprika for color. Put the casserole dish in the oven on low to keep warm; set the temperature on broil to brown the top just before serving.

(You can make this dish the day before and refrigerate, then put in the oven, covered for 30 minutes then uncovered at about 325 degrees F. Do not microwave, because the mashed potatoes will taste good but the consistency will turn to glue. If you have any leftover ingredients you can use in scrambled eggs the next morning.)

The bright details of a life with a spiritual side