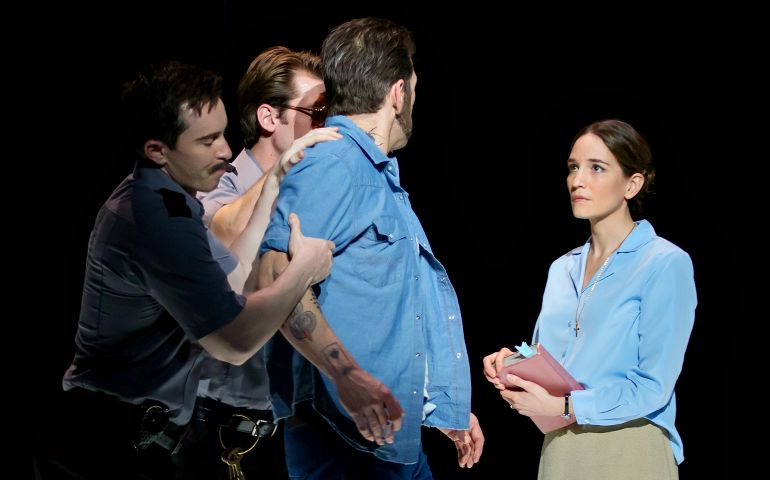 This magnificent opera, based on the book of the same name by St. Joseph Sr. Helen Prejean, is among the best and most successful contemporary operas. The opening night audience was drawn into this difficult subject while demonstrating enthusiasm for the music.

This work has a special momentum, already being the most performed contemporary opera, with more than 300 performances. Add to this the total commitment for Washington National Opera director Francesca Zambello, who arranged to have Prejean, Heggie and McNally present for opening night, and the result created an air of excitement.

The work of Prejean is the stuff of legend, with her work told in a best-selling book and depicted a movie and now an opera. She reaches out to a criminal convicted of rape and brutal murder. Sentenced to death, he has been on death row for years without resolution for the victims' families or for his own family.

Joseph De Rocher describes himself as "a piece of meat," making the point that as a man convicted of murder and rape, he is no longer seen as human. Why should we care?

Prejean takes on a challenge that at first seems horrible. She appears to be sympathetic to this murderous man, by writing and then by visiting at his request. She becomes his spiritual guide and clergy.

The families of the two victims — who were still teenagers when they were killed — are furious with her, as she has not reached out to them. The ensemble in this section was among the most effective moments in the opera.

Although I brought with me my own sense that Sister Helen had misplaced her effort and sympathy, I came away from the opera more convinced that something else was at work here.

Early in Act 1, Sister Helen is stopped by a state trooper for speeding during her three-hour ride to Angola Prison. Realizing that she is a religious sister, the trooper tears up the ticket, telling Sister Helen that his mother has cancer. He asks if the sister can pray for his mother. That scene set the tone — that the purpose of the work of the clergy and religious orders and the purpose of religion are assisting those who are suffering by offering them a path through crises.

"The Journey of Sister Helen" would be a more accurate title, as sympathy for De Rocher seems impossible. The journey of a sister to act as a bridge to God for this cruel man is held up as a reflection to an audience on stage and in the opera house. Justice is defined as this man's punishment, yet the nature of capital punishment adds to the sense that there is no justice. This is "an eye for an eye," which turns the witnesses and executioners into cruel, unthinking people.

Focusing on capital punishment is what this work is about. Sister Helen is there to help De Rocher confess his crime and help him to die knowing that the image of God is in Sister Helen, is his own image, and therefore he is loved in these moments of death.

Does he deserve that?

When we know there is evil in the world, how can we use Prejean as a role model? People will remain divided about this issue, yet everyone will be amazed by the lesson of Prejean in working with those who are poor and forgotten.

The role of Sister Helen was sung by mezzo-soprano Kate Lindsey, and she demonstrated a remarkably even voice with overall sympathetic warmth of tone, agility and fine use of the mezza voce with a shimmering pianissimo.

Michael Mayes, baritone, delivered a stentorian performance of De Rocher and was excellently cast for his physicality. While he delivers many clichés, these seem in line with what you would expect from a man on death row, and therefore the clichés seem realistic.

Susan Graham, one of America's leading mezzo-sopranos, first played the role of Sister Helen. Here Graham played Mrs. De Rocher, exploring her emotions with every nuance possible for the misguided yet sympathetic mother of the killer. Graham's voice was lyrically sympathetic and expressed the vulnerability of her character.

There were many outstanding voices in supporting roles. Noteworthy was Sister Rose, sung by Jaqueline Echols, soprano, whose second-act duet with Prejean was among the most memorable musical moments. The men's chorus of prisoners on death row did a fine job of acting and demonstrating the industrial nature of prison life. It was clear the chorus members enjoyed their role.

Heggie's first opera is a solid work that uses the hymn "Gather Us Around" as a unifying theme. Among the most memorable ensembles includes the complete cast singing at the end of Act 1, which is like Italian composer Giuseppe Verdi at his best in its grandness and power.

The musical composition mixes the style of romantic film scores overlaid with modernism in an effective manner, producing a style distinctive to Heggie, yet reminiscent of composers like Gian Carlo Menotti in "The Consul," and Nicholas Maw's opera "Sophie's Choice." Both are highly successful works.

When a terrible murder happens, do we get even? Do we get past it? Can we save our own lives or shall we become victims of watching the killer die? The audience is the judge.

"The poor do not have lawyers who help them get lesser sentences," Prejean said before the performance.

[Arnold Saltzman is a composer of symphonies and opera, an opera critic and rabbi-cantor.]