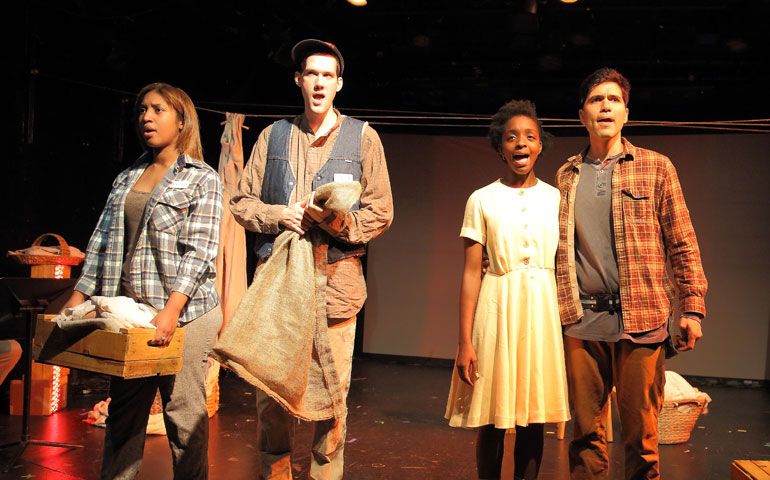 The cast of “The Unusual Tale of Mary and Joseph’s Baby” (Don Chaffer)
This article appears in the Christmas 2016 feature series. View the full series.

New York — When playwright Chris Cragin-Day decided to write a Christmas play, she thought at first about adapting a Hans Christian Andersen tale, but then she went further back, all the way to the original Christmas story. She just knew the Nativity would make a good musical comedy.

She wasn’t the only one who saw the humor in the event. She had no trouble convincing Don Chaffer to write the music and lyrics for her script. Together they birthed an unlikely play based on an unlikely birth, “The Unusual Tale of Mary and Joseph’s Baby,” which had a critically praised run in the New York International Fringe Festival in August and will be produced by River & Rail Theatre Company in Knoxville, Tenn., in December.

“It’s situation comedy at its finest,” Cragin-Day said. “You’d have to work hard to avoid the humor.”

Cragin-Day is a practicing Presbyterian and Chaffer a practicing Anglican, and both believe the Christmas story literally. But as an experienced playwright and an experienced songwriter, they could see the comedic advantages in the story of Jesus’ birth. Chaffer summed it up in their application for admission into the Fringe Festival, where their show was labeled a “must-see.”

“Every December, a bunch of people celebrate a baby, more specifically, a first-century Jewish refugee virgin’s baby. When people assemble their little nativities every year, they always also include a figurine of Mary’s Jewish refugee fiancé, Joseph, who marries Mary even though she’s pregnant with someone else’s baby. While the laws of their time and religion would have had her stoned to death, Joseph opts for matrimony. Why? Because one night he has a dream ‘from God,’ who explains the situation to him through an angel. Yep. And things just get crazier from there.”

Cragin-Day and Chaffer were so inspired by their idea that they wrote the show’s first draft in nine days. While they enjoyed the humorous undertones, they wanted to emphasize the human side of the story by imagining what Mary and Joseph’s marriage would have been like. The Christmas story is always told from the omniscient perspective, God’s perspective.

As a dramatist, Cragin-Day was interested in what Mary wanted, since in dramatic structure the protagonist’s want determines the plot. Cragin-Day turned to her uncle, Daniel Hays, a biblical scholar whose scriptural interpretations are popular in evangelical colleges and universities. She also mined the book Women in the World of the Earliest Christians: Illuminating Ancient Ways of Life by Lynn H. Cohick to learn about the standing of Jewish women at the time. Since little is known about Mary and Joseph’s marriage, she wanted to create one for them onstage that would be historically possible and show the everyday of life between the divine moments.

The two co-creators talked about their latest collaboration -- their first musical together was “Son of a Gun” in 2012 -- in Cragin-Day’s office at the King’s College, a liberal arts evangelical Christian college in Manhattan’s financial district where she is an assistant professor of English and theater. Climbing one wall were oversized, colorful handwritten sticky notes on their next show, “The Zombie Family Musical,” an existential comedy about a dysfunctional family that all become zombies on the way to family time.

“The biggest challenge, and I’m still considering whether we nailed it or not, is that we wanted to be true to the divine moments of the story, but we also wanted it to feel like a human story,” she said.

Chaffer is a recording artist, music director and producer and the co-band leader of Waterdeep, which he founded with his wife, Lori. For “Mary and Joseph’s Baby” he wrote the music and lyrics, using a folk style, and adapted the Magnificat.

Critic Keith Paul Medelis of the website Theatre Is Easy was won over.

“The songs never reach anything preachy, rather we get a personal and careful look at the life of a couple coming to terms with this virgin birth and the enormity of their new, important place as impoverished people,” he wrote. “It’s enough for this godless pessimist to crack several smiles and even, impossibly, tap my feet. This folks, is one of Fringe’s best. It’s smart, it’s polished, it’s honest, and it has a bright future ahead of it.”

Emphasizing the impoverished people angle Medelis mentioned was important to the co-creators because of what Hays had explained to them. He said the word builder, as in a builder of houses, had long ago been translated as carpenter, but Joseph would have been a construction worker, and that is how he is portrayed. The idea of Joseph as a middle-class carpentry shop owner is false, Hays said. The Jews weren’t middle-class; they were poor and oppressed. Hearing that, the two creators knew they had found their story.

“It was the biggest eye-opening moment for us,” Cragin-Day said. “God gave his child to poor people. I hope the audience will see the beauty in the story, that the baby was given to the lowliest and what it means that he trusted them with that story.”

Besides setting the record straight about Joseph’s profession and poking gentle humor at Mary and Joseph’s situation, the writers also wanted to show these two people of faith and their encounters with God. They used their imaginations and the Bible.

The Magnificat was a window into how Mary thinks of God, Chaffer said. She believes God lifts up people.

“It’s the most insight we have into her,” he said, explaining how the Bible offers only the highlights of the story, not “the days of feeling bored or uninspired.”

“The story is about faith, absolutely, but that doesn’t obscure the everyday doubts. It was finding a way to tell the big human questions that emerge in the story. It’s about human choice and human action.”

[Retta Blaney is the author of Working on the Inside: The Spiritual Life Through the Eyes of Actors and an adjunct writing professor at The King’s College.]

Scorsese, my dad, and Christmas

To believe, or not to believe: examining Shakespeare's beliefs

Portrait in flesh and blood of a pioneer theologian