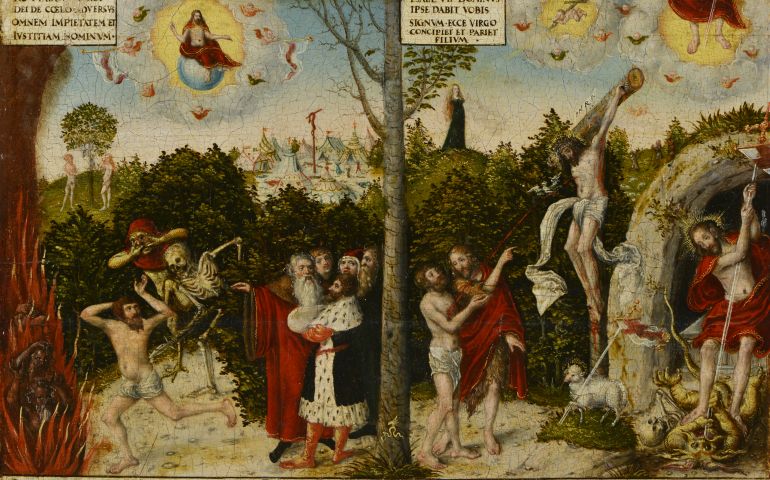 "Law and Grace" by Lucas Cranach the Younger, after his father, circa 1550 (Luther Memorials Foundation of Saxony-Anhalt/Juraj Lipták, courtesy of Pitts Theology Library)
This article appears in the Reformation turns 500 feature series. View the full series.

New York — Walking in the footsteps of Martin Luther requires a good deal of shoe leather and physical stamina. German scholars are still turning out papers on how many kilometers the world's most famous Protestant reformer actually walked. Biographies indicate the Augustinian friar visited or lived in some 50 places in Germany — most in the East Central regions of the country.

The only means of transport in Luther's late 15th and early 16th centuries were horses and oxen- or horse-drawn carts. Luther describes just such journeys in his notes as well as walks that required several days and a few overnights in local inns or with people he knew or met along the way. While not a marathoner, it is safe to conclude that the renowned Luther clocked thousands of kilometers on foot, horseback or tucked into a wagon pulled by oxen.

Americans wanting to walk in his footsteps can count several thousand steps a day on their pedometer or Fitbit as this reporter did in September. But for the more pew-potato Catholic or Protestant who still wants to know about Luther's life and times — in this the 500th anniversary year of his posting his 95 theses on the door of Wittenberg's All Saints Castle Church — three U.S. exhibitions may prove a more doable pilgrimage.

At the Morgan Library in Manhattan's Midtown — 36th and Madison — a few exquisite rooms display "Word and Image: Martin Luther's Reformation." A large portion of one of the exhibit's interior walls holds one of only six existing printed copies of the 95 theses. It is these protests against the sale of indulgences and against other abuses in the Catholic church of the late Middle Ages that launched the Reformation on Oct. 31, 1517.

Close by is the wooden coffer used by Dominican friar Johann Tetzel, the local indulgence peddler who stoked Luther's ire by accepting money in exchange for granting indulgence certificates. These promised the buyer remission of punishment for sin.

Adorning the exhibition are nearly 40 paintings, prints and drawings by Renaissance artist Lucas Cranach the Elder. Cranach was not only Luther's friend and neighbor in Wittenberg, but was a major promoter of the Reformation through his production of woodblocks, prints and paintings of its key personages and their prolific output.

The show also includes Luther's manuscript draft of his famous Old Testament translation and some 30 of his most important publications. The works — on loan from German museums — have never been displayed in the United States before.

Visitors to the Morgan will see portraits of Luther from his early days as a tonsured Augustinian to his later years with a full head of hair under a scholar's cap. As well as alterations in his physique, they can observe changes in his handwriting by comparing letters sent to Emperor Charles V in 1520 with writings and translations a decade later.

Lutherans and Catholics, who constitute a large segment of Minnesotans, will be able to learn much about one of the most controversial figures in world history by visiting "Martin Luther: Art and the Reformation" at the Minneapolis Institute of Art, on view through Jan. 15.

The exhibit fills eight roomy galleries and highlights Luther's youth, his years as a priest, scholar and preacher, his theology and his Wittenberg house as the hub of the Reformation.

One of the galleries contains objects found in 2004 and 2005 during excavations undertaken from his boyhood homes in Eisleben and Mansfeld. Another gallery displays items from his house in Wittenberg, shared with his wife, former nun Katharina von Bora, and their six children. Archeological finds reveal jewelry, penknives, tiles and glass, and include Luther's beer stein and travel spoon. On loan from German museums and foundations, these objects had never before left Germany.

Besides furniture and household objects, the exhibit contains a wealth of paintings, prints and sculpture showing the rulers and courtly life of the era. It also deals with Catholic piety during Luther's life, represented in art, carvings, vestments and the work of goldsmiths.

The pulpit from which Luther preached his final sermon before his death in 1546 is on view, newly restored for the Minneapolis opening. Sixteen paintings from Cranach's German studio are also displayed, two-thirds of them autographed by the artist. The paintings demonstrate how art was an essential tool in communicating the faith and Scriptures to a broad audience.

Besides beauty, the galleries also unfold the turbulence of the times through vandalized works of art, satirical woodcuts, weapons and war trophies. The exhibition contains Pope Leo X's Bull of Excommunication against Luther in three early editions.

The Minneapolis curators have extended an invitation to teachers and students to learn of the momentous event that the Reformation represents in world history as well as its relevance for today. A lecture on "Art Illuminating Human Rights: Muslim in Minnesota" will take place on Dec. 1; "Political Satire in the Age of Martin Luther and Today" will be on Dec. 8; and a final talk will be given Jan. 14 on "Martin Luther's Reformation Impact on Nordic Europe."

Luther's seminal theological understanding, teaching and reform was the concept that salvation comes through God's grace alone, not through any meritorious efforts by human beings. This idea is the theme of Cranach's 1536 painting "Law and Grace." The artwork is also the centerpiece and theme of the exhibit now at Emory University in Atlanta, titled "Law and Grace: Martin Luther, Lucas Cranach and the Promise of Salvation."

The exhibit is on view in the Candler School of Theology's Pitts Theology Library until Jan. 16. Pitts' Librarian M. Patrick Graham said that the German team that chose three U.S. locations to host simultaneously the Luther exhibits found Atlanta a natural location. The city is famous for its memorial and grave of the Rev. Martin Luther King Jr. Students at the Candler School are well-acquainted with King; with Luther, the reformer; and with Dietrich Bonhoeffer, the German Protestant theologian and critic of the Nazi regime, which executed him in 1945.

The team "felt that the call of these historic figures to repentance, freedom and faith in God was remarkable and to be recognized and commemorated as part of the legacy of the Reformation," Graham said when opening the exhibition in October.

Besides the large, evocative "Law and Grace" painting, the show also contains artifacts from the Holy Roman Empire and a wall fountain from Luther's House in Wittenberg, found during the archeological digs of 2004-2005.

The Pitts Library is already well-known to Luther scholars for its collection of some 3,600 items — largely Reformation imprints and manuscripts donated to the library by Richard and Martha Kessler in 1987. The gift has made the library the third-largest trove of Reformation material in North America and includes more than 1,000 publications by Luther himself.

For Luther fans lucky enough to be in Europe in the coming months, the World Council of Churches has launched a European Reformation Roadmap, which features a show truck or story-mobile that will travel to 67 towns and cities in 19 European nations between November and late May 2017. The roadmap got underway in Geneva, headquarters of the council, Nov. 3 and is currently traveling in Switzerland.

The moving Reformation museum will stop at each city for 36 hours, allowing regional and ecumenical partners to invite the local population to tour the story mobile and discover local relations to the history of the Reformation. The stops will include religious services and a festival in many of the settings.

The Reformation truck is scheduled to stop in a number of European capitals including London, Berlin and, its most southern stop, Rome on Jan. 18. It will travel as far north as Turku, Finland, March 15, as far west as Dublin Feb. 18 and as far east as Sibiu, Romania, Jan. 28. The movable museum is expected to cover some 25,000 kilometers.

German stops important in the life of Luther include Augsburg, Worms, and Eisenach with its Wartburg Castle, where he translated the Bible into German while confined there in 1521.

The mobile ends its pilgrimage in Wittenberg May 27 where the World Reformation Exhibition "Gates of Freedom" will be opened. Thousands are expected in Luther's home city, including some 20,000 youth.

[Patricia Lefevere has been a longtime NCR contributor.]

Ecumenism in our time: A fruit of the Council

Seeking common ground across the branches of Christianity

Far from Italy, living in American isolation, I pine for Lucca