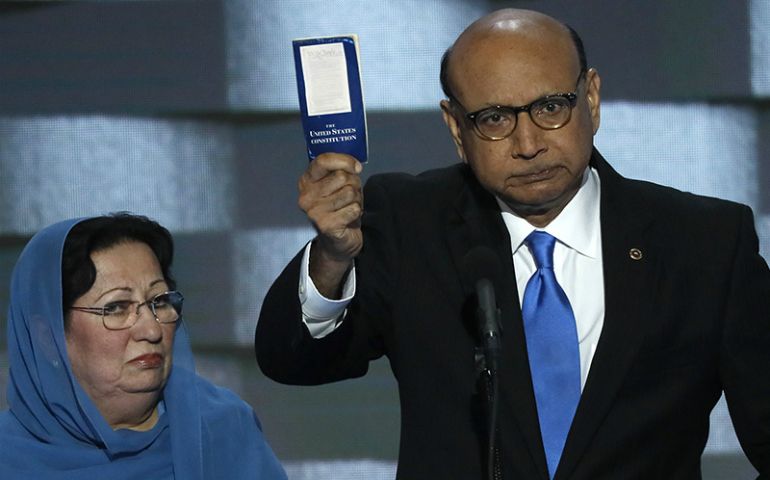 Khizr Khan, right, with wife Ghazala Khan, whose son Humayun S. M. Khan died serving in the U.S. Army, offers to loan his copy of the Constitution to Republican U.S. presidential nominee Donald Trump during the last night of the Democratic National Convention in Philadelphia, PA, on July 28, 2016. (Reuters/Mike Segar)

The election of Donald Trump, a man who suggested banning Muslim immigration to the U.S., and attracted overwhelming evangelical support, is the top religion story of the year, according to the members of the Religion News Association.

But Trump came in as runner-up for the top religion newsmaker of the year, behind Gold Star parents and Muslims Khizr and Ghazala Khan, who described the death of their son, U.S. Army Captain Humayun Khan, in Iraq to a spellbound Democratic National Convention audience in July.

RNA is an international organization of journalists who write about religion. It has polled its 500 members on the top 10 religion stories of the year for 40 years.

While Trump was not the most religious candidate in what started out as a broad field, his election can be credited to his appeal to white evangelicals, who voted for him by a margin of 4 to 1.

Evangelical support of Trump — who has been married three times, owns multiple casinos and has spoken disrespectfully of women — was such a surprise it took its own category, coming in as the No. 9 story in the RNA poll.

Also high on the list of RNA's most important religion news stories are:

Francis has topped the list of religion newsmakers for the last three years. This year, he dips to fourth place, behind the Khans, Trump and the Standing Rock Sioux Tribe.

The full list of winning stories and newsmakers can be found here.

Leadership is lacking in this election cycle