2021 in review: Pope calls world to act on impact of climate change on poorest countries 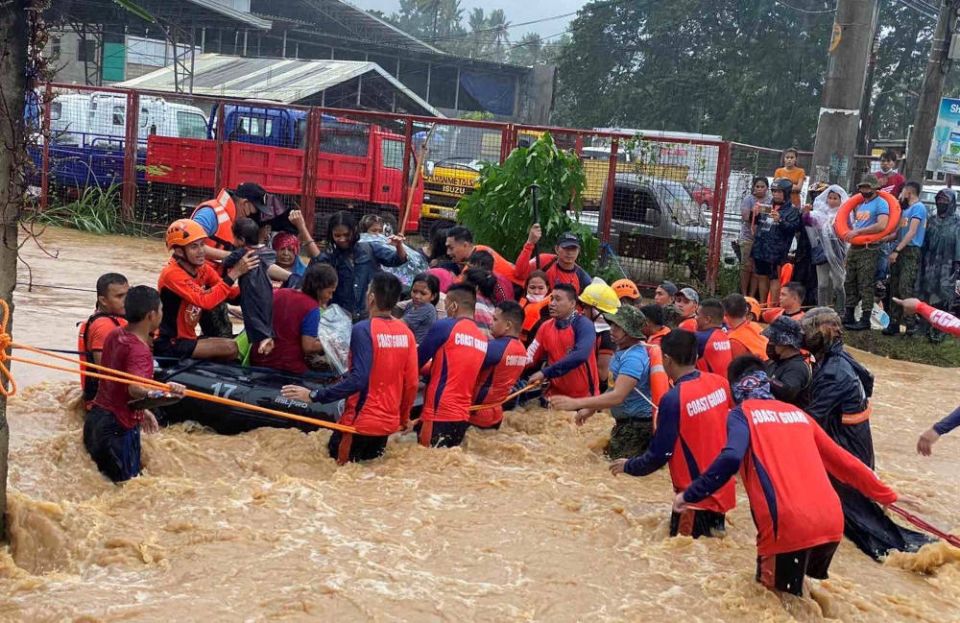 Pope Francis invited Catholics — and anyone else interested — to join a seven-year journey to widen the reach of his 2015 encyclical on the environment in a time of global climate change.

Known as the Laudato Si' Action Platform, the effort formally launched Nov. 14 in dioceses around the world.

The pope introduced the platform in a video May 25, encouraging people to join the global grassroots movement to create a more inclusive, fraternal, peaceful and sustainable world.

Coordinated through the Dicastery for Integral Human Development, the platform is a "journey that will see our communities committed in different ways to becoming totally sustainable, in the spirit of integral ecology," the pope said.

He called for a "new ecological approach that can transform our way of dwelling in the world, our lifestyles, our relationship with the resources of the earth and, in general, our way of looking at humanity and of living life."

The initiative invited dioceses, parishes and individuals to build an integrated global effort to protect creation for future generations. The Vatican platform is meant to help those who want to increase their commitment to bringing the encyclical, "Laudato Si', on Care for Our Common Home," to life by committing through 2028 to carry out a set of actions they developed based on local needs. 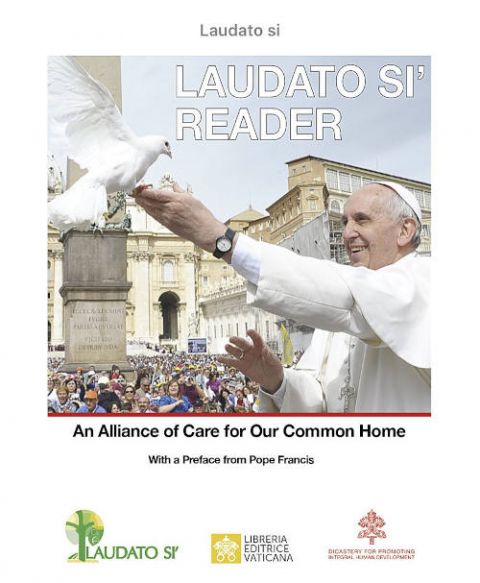 Featuring a preface by Pope Francis and a message from the U.N.'s António Guterres, the Vatican published in November this "Laudato Si' Reader," with a wide range of reflections on Francis' 2015 encyclical. (CNS screenshot/Libreria Editrice Vaticana)

In the United States, 17 dioceses and 58 parishes had committed to participating in the platform at its kickoff. More were expected to join, said Jose Aguto, executive director of the Washington-based Catholic Climate Covenant.

"The covenant, we're really excited about the U.S. participation in the Laudato Si' Action Platform so far. We look forward to the seven-year journey as a big step," Aguto said Dec. 1.

The effort surrounding the platform began as the two-week 26th U.N. Climate Change Conference closed in Glasgow, Scotland. Representatives of more than 200 nations came together Oct. 31-Nov. 13 with the goal of agreeing to cut global carbon emissions by half by 2030 as part of efforts to limit global warming to 1.5 degrees Celsius.

COP26, as the conference was known, was delayed a year because of the pandemic.

A Vatican delegation and several Catholic organizations and parishes were present throughout COP26. Vatican representatives joined high-level talks, while Catholics from other groups participated in sideline events.

Vatican representatives in a video message urged the conference to deliver on financing from wealthier countries to help poorer countries respond to climate change and to take urgent action to comply with the standards of the Paris Agreement. 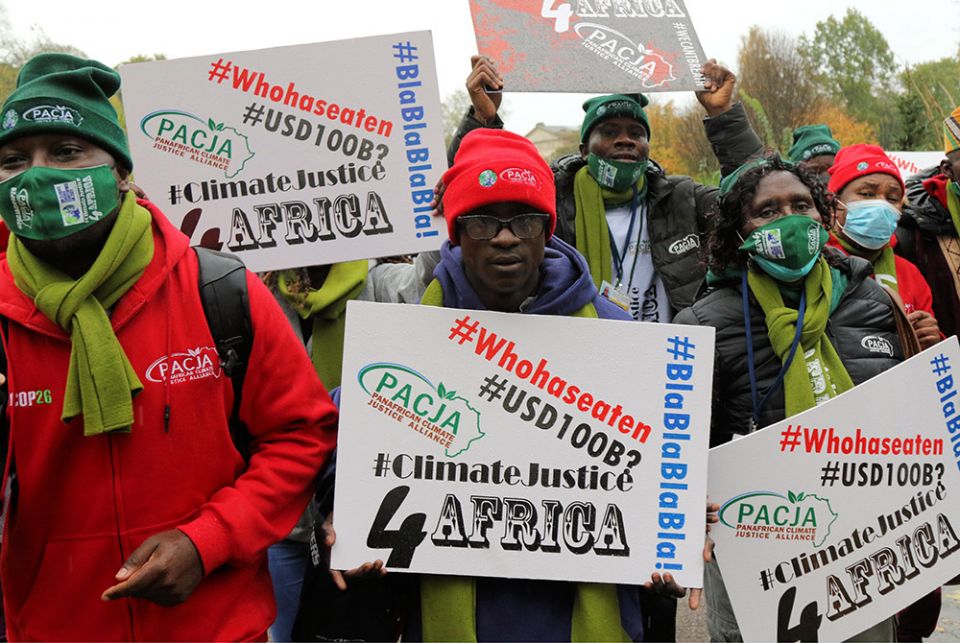 Africans join a protest during a Day of Action at the U.N. Climate Change Conference Nov. 6 in Glasgow, Scotland. (CNS/Simon Caldwell)

The final agreement, however, fell short of those goals, disappointing Catholic environmental and development advocates. Action to limit temperature increases was pushed into 2022 and wealthier nations failed to deliver on needed climate finance to help poor countries respond and adapt to climate change.

Although promises and practical action fell short in the final agreement, "we are on the road from which there is no turning back," said Christine Allen, director of CAFOD, the Catholic international development agency in England and Wales, which joined the Vatican delegation in Scotland.

"The level of realization from right across the world that we need to act and act with urgency absolutely took place," Allen said.

Chloe Noel, the coordinator of the Faith Economy Ecology Project at the Washington-based Maryknoll Office for Global Concerns, who joined the conference sideline activities online, told CNS Dec. 2 that while delegates from major fossil fuel-using countries began discussing reduction in such consumption, "there's not a clear plan about how that will be done and by when that will be done."

She also called for a more expansive financial commitment by the world's richest nations to help developing countries already feeling the negative effects of climate change.

"We will continue, as the climate movement, as the faith community, to push the U.S. government to address loss and damage at COP27," Noel said.

In other events, the Catholic Climate Covenant teamed with Creighton University in July to convene the second of three planned biennial "Laudato Si' and the U.S. Catholic Church" conferences. More than 2,700 participants joined a series of online programs to learn how to bring the encyclical's teaching on climate change more widely into the life of the church.

"We're continuing to grow the Catholic community (that is) concerned about climate. "We're seeing steady increases in the number of Catholics being interested," Aguto told Catholic News Service.

"But we need to elevate our voices more. The science is becoming more significant and the divisions in our country are becoming more stark. We have to speak first of love of God and love of neighbor. We have to create a space for dialogue," he added. 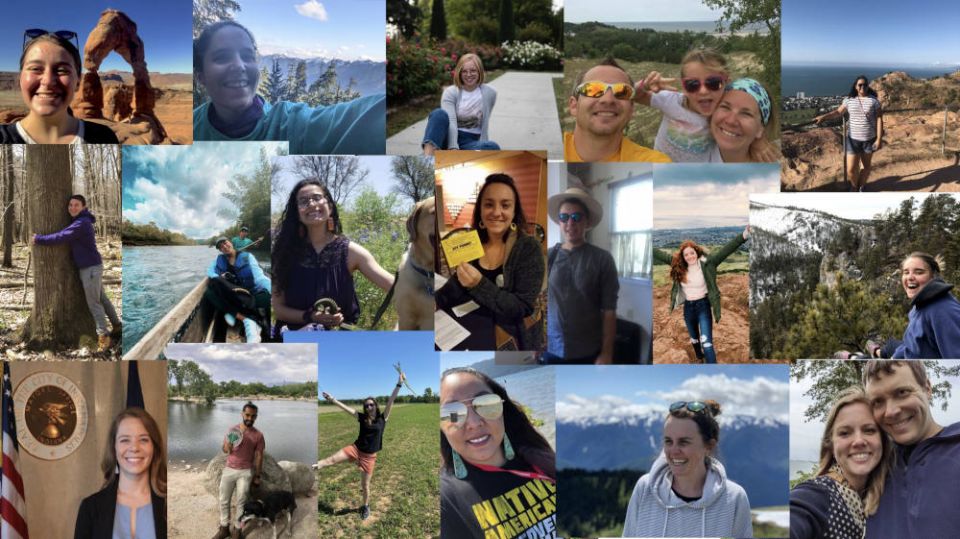 A global campaign to divest from fossil fuels continued to gain adherents in the fall, with 72 institutions — 36 of them Catholic — announcing days ahead of COP26 that they will withdraw investments from carbon-based energy corporations. The institutions hold assets of $4.2 billion.

The Vatican and Pope Francis have become increasingly vocal about shifting investment funds from fossil fuels toward clean energy alternatives. In 2020, as part of the Laudato Si' Year, the Vatican released guidelines for Catholics to implement integral ecology and other actions outlined in the pope's encyclical.

"In very strong language, divestment was recommended," Father Kureethadam told the online conference. "Last year we announced the Laudato Si' Action Platform. Among the Laudato Si' goals there's ecological economics and it mentioned the need to divest. So the Vatican is supporting this journey."

The priest called the task of reducing the use of highly polluting fossil fuels a "huge challenge" but one that was possible. A large majority of climate scientists have concluded that the burning of fossil fuels as a leading cause of climate change.

Changes were afoot during the year in two leading Catholic environmental groups.

The Catholic Climate Covenant announced in September that Aguto would be its new executive director, succeeding Dan Misleh, who moved into the role of founder. Misleh helped establish the organization in 2006 and continues to play a leading role in its work in the United States.

In addition, the Global Catholic Climate Movement became known as the Laudato Si' Movement in July.

Movement leaders said the change better reflects the work of the six-year-old worldwide network and its connection to prayerful action on environmental protection and climate change.

The new name easily translates into other languages as well because it incorporates the Franciscan phrase Laudato Si', which is Italian for "praise be to you," Lorna Gold of Ireland, who chairs the organization's board of directors, said at the time.

EarthBeat | 2021 in review: Pope calls world to act on impact of climate change on poorest countries