At 2022 commencement ceremonies, an ecological theme for several Catholic colleges 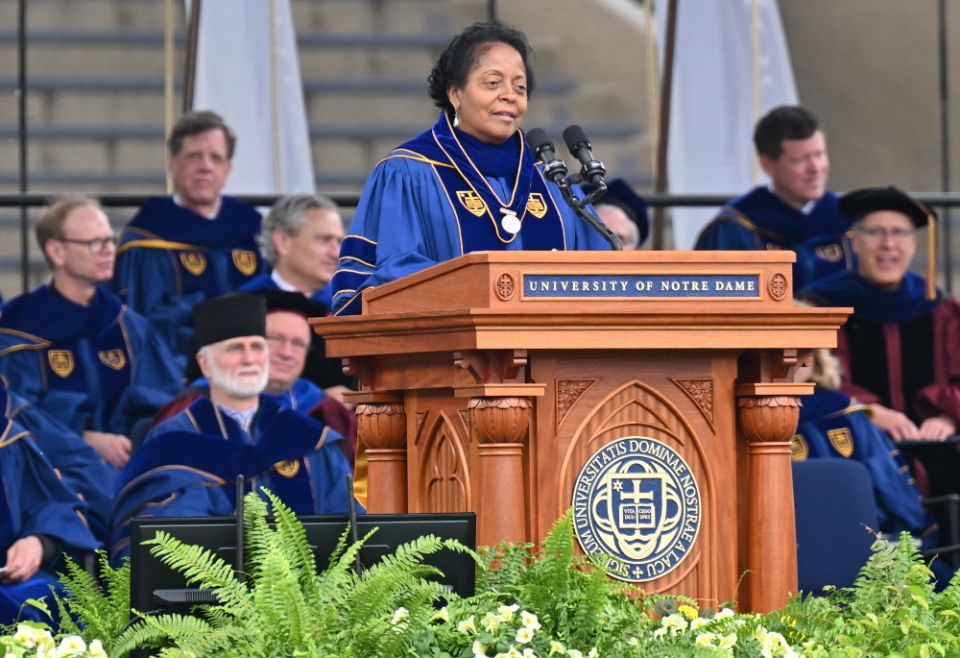 Both St. Michael's College, in Colchester, Vermont, and College of St. Mary in Omaha, Nebraska, chose as commencement speakers Catholic leaders on the environment and climate change. And graduates at the University of Notre Dame also heard remarks from Sharon Lavigne, a Catholic environmental justice advocate and recipient of the school's 2022 Laetare Medal.

"Thank you, Notre Dame, for allowing me to celebrate with you, your faculty, and staff," Lavigne told those gathered May 15 inside Notre Dame Stadium for the school's 177th commencement ceremony, saying she was "beyond honored and humbled."

John Brennan, chair of Notre Dame's board of trustees, said Lavigne, a retired special education teacher, was chosen for the prestigious Laetare Medal — considered one of the highest honors in the U.S. Catholic Church — for her work organizing in St. James, raising national attention around environmental racism and "fac[ing] down the goliaths that threaten the health of your community."

"At a time when others found no cause to hope, when they encouraged you to give up or to move from the land that had been in your family for generations — you chose to rise up for the people of St. James Parish," Brennan said.

"I was no longer willing to sit idly by while my community, part of what is known as 'Cancer Alley,' grew sicker," Lavigne recounted, sharing she learned from her father at a young age "that prayer changes things."

Lavigne told Notre Dame's graduates that she felt called to protect her community, culture and faith by standing up to major companies, like Formosa Plastics and Wanhua Chemicals. She encouraged them to "never doubt that you are called, too."

"As you celebrate today and move forward in your paths, remember you are called to be a world class leader within your sphere of influence. Do not let circumstances distract you from fulfilling your purpose," she said.

The same day at graduation at St. Michael's College, Dan Misleh related moments in the 40 years, to the day, since his own graduation from Xavier University, in Cincinnati, from spending a year in Alaska with the Jesuit Volunteer Corps to founding the Catholic Climate Covenant in 2006.

"The secret to a truly meaningful and full life begins with gratitude," he said, whether for friends and family or for the earth itself and its smallest creatures and moments.

Misleh said that responding to climate change requires everyone to do their part, in daily decisions about what to buy and how to travel, and that "even how we make a living impacts the future of our planet and its people."

At the same time, "nobody likes a grim do-gooder," Misleh added, and he encouraged the next generations to approach major societal issues like climate change with joy and hope.

"Without a sense of hope or a sense of humor, without intentionally joining with others on our journey and without joy, a byproduct of gratitude, we will quickly flame out, become desperate and paralyzed," Misleh said.

"Let us sing as we go," he added, referencing advice from Pope Francis in Laudato Si'. "Let us be grateful we've made it this far and look forward to a future that we can shape through our own vision and efforts."

Related: People of faith are not waiting for politicians to act on climate change

During graduation services May 15 at the Sisters of Mercy-founded College of St. Mary, Stephanie Clary, environment editor for National Catholic Reporter, shared her journey to understanding creation care that began with the writings of St. Joseph Sr. Elizabeth Johnson, who has viewed Catholicism through feminist and ecological lenses.

That perspective led Clary to see parts of creation beyond humanity as participants in salvation — "not as a backdrop or environment within which humans reside, not as supporting characters on which humans rely for resources, and not as projects for humans to manage, but as active agents with unique purpose in a divine plan for existence."

Such an understanding of creation, she said, adds a third dimension to what living a good life means and the loving relationships that people are called to — with God, with neighbor and other parts of the created world.

In her role as editor of NCR's EarthBeat, Clary said it's important to report on new studies and data about climate change, but equally essential to tell stories about the impacts of climate change and environmental degradation today, especially on already vulnerable communities and unstable ecosystems, and how environmental issues connect with systems of injustice and inequality.

"It is accurate to say the world is rapidly warming due to human activity and we need to stop it. But I fear if that's the only line we keep repeating then we're leaving out important details. We're leaving out parts of the story that have the potential to convert hearts, change minds and save lives — human and non," Clary said.

"The stories we tell matter. And details make a difference."