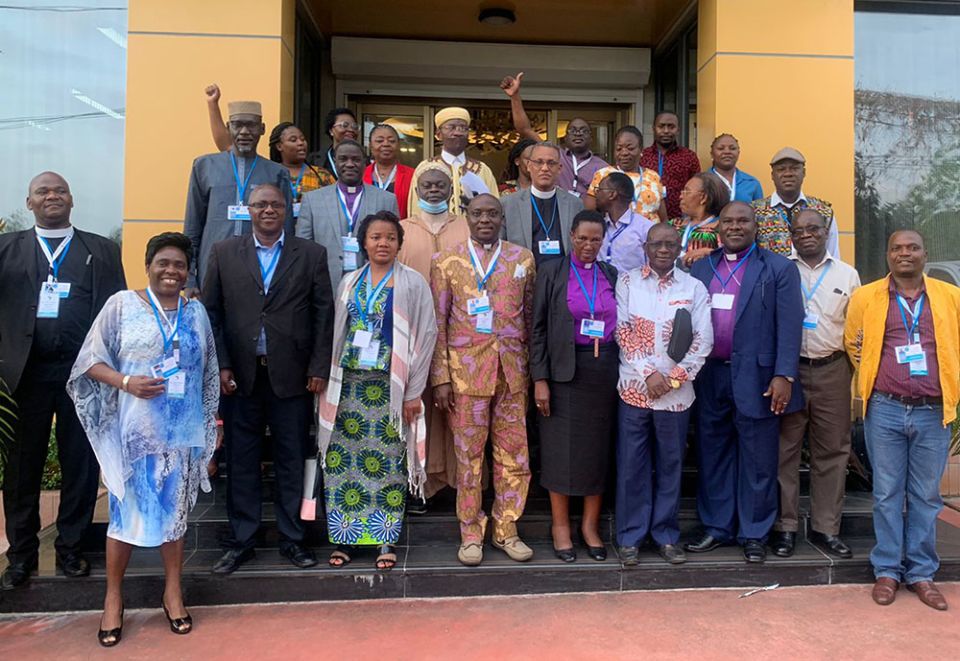 During Africa Climate Week, faith leaders held a side event Aug. 30 in Libreville, Gabon, where they devised key priorities and asks for leaders at the COP27 United Nations climate change conference that will take place in Egypt in November. (Courtesy of Patricia Kombo)

LIBREVILLE, GABON — Africa Climate Week delivered calls for further accelerated action in response to climate change and a "one Africa" approach on all fronts ahead of COP27, the next United Nations climate summit, which will take place in Sharm el-Sheikh, Egypt, in November.

Africa Climate Week's five-day proceedings, spanning Aug. 29-Sept. 2, brought together more than 2,300 participants from across Africa, representing governments, multilateral organizations, the private sector and civil society, with many more joining the 200-plus individual sessions virtually. In addition, ministers and delegates from 42 nations joined the opening ceremony.

The faith community, represented by a contingent from the Africa Faith Actors Network on Climate Justice, part of the All Africa Conference of Churches, termed climate change "a matter of life and death."

Speaking to Gabon's environment minister, Lee White, during a peaceful demonstration in Libreville Aug. 27, the Rev. Ezekiel Lesmore, programs director for the All Africa Conference of Churches, said, "Our people are dying. God is going to ask each one of us, especially those who have political power. Our political leaders must be accountable and unite under one voice ahead of COP in Egypt." 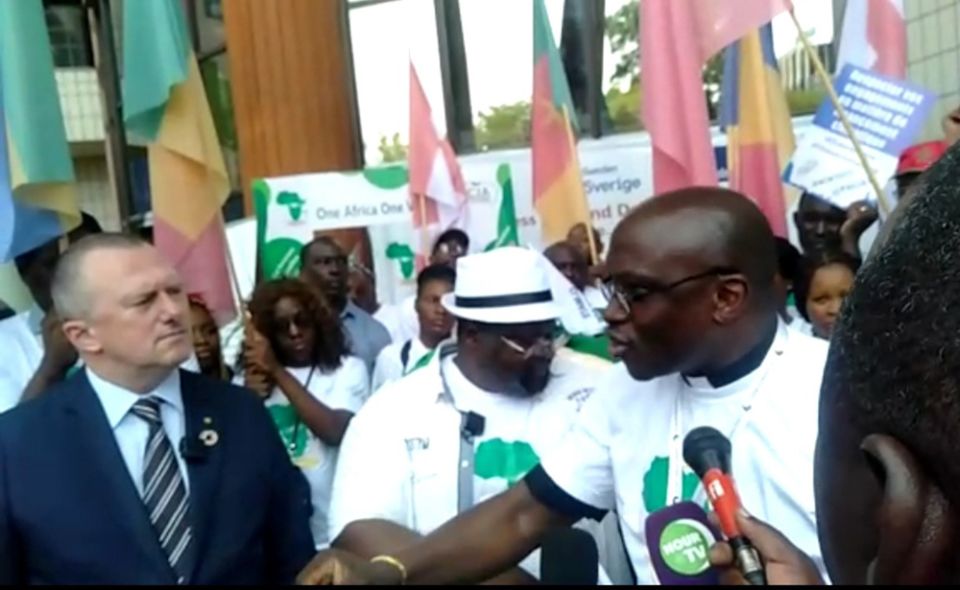 Alphonse Muia, the deputy country director of Catholic Youth Network for Environmental Sustainability in Africa (known as CYNESA), agreed, telling EarthBeat after the weeklong meeting, "Africa needs to have a common position on issues discussed at COP since there is no perfect union to raise our bargain. We need to put together our priorities and speak as one."

The faith community's message reiterated that of Gabon President Ali Bongo Ondimba, who in remarks at the opening ceremony stated, "The time has come for Africans to take our destiny into our own hands." He urged the ministers and delegates gathered here "to work on innovative, concrete and sustainable solutions and give African nations the means to fight climate change successfully."

"COP27 is Africa's COP and will significantly shape our future," Ondimba said. Ahead of that critical meeting, "Africa Climate Week can bring us together to walk down the road to COP27 with unity of purpose and resolve for a better future," he added.

The gathering in Gabon was the third Africa Climate Week. It was part of multiple regional climate weeks the U.N. has endorsed as a means to maintain and build local momentum for more credible and durable action at the international climate summits, focused on implementing the 2015 Paris Agreement, including its goal to limit global warming to 1.5 degrees Celsius.

Support for the regional climate weeks was part of the key outcomes of Glasgow Climate Pact reached at COP26 in November 2021.

The 2022 Africa Climate Week was seen as an important moment for Africa to showcase the continent's efforts to address climate change and to articulate its priorities, including reducing emissions, building transformative adaptation and resilience, accessing appropriate finance, fostering regional partnerships, and addressing "loss and damage" for climate impacts already experienced.

"This Climate Week is about the power of partnerships. No country, rich or poor, can fix the climate issue alone," said Ibrahim Thiaw, who served as acting U.N. climate executive secretary before Simon Stiell of Grenada was appointed in August.

"Africa has long been portrayed as a region of problems. And there is no possible denial that Africa is facing massive challenges. However, it's about time that Africa's major contributions to the global challenges be also recognized," Thiaw said.

Along with establishing priorities, the meeting provided an opportunity for the region to highlight its special needs and challenges at one of the world's major frontlines of climate change.

Despite contributing 3% of historical global emissions, Africa faces a disproportionate level of devastating climate impacts, among them biodiversity loss, water shortages, reduced food production, and loss of lives and livelihoods, according to the latest reports from the U.N. Intergovernmental Panel on Climate Change.

Currently, the Horn of Africa is experiencing the worst drought in 40 years, which has been compounded by the COVID-19 pandemic and food insecurity fueled by the war in Ukraine. Millions of people in the region are facing hunger, with many leaving home to search for food for their families and animals. 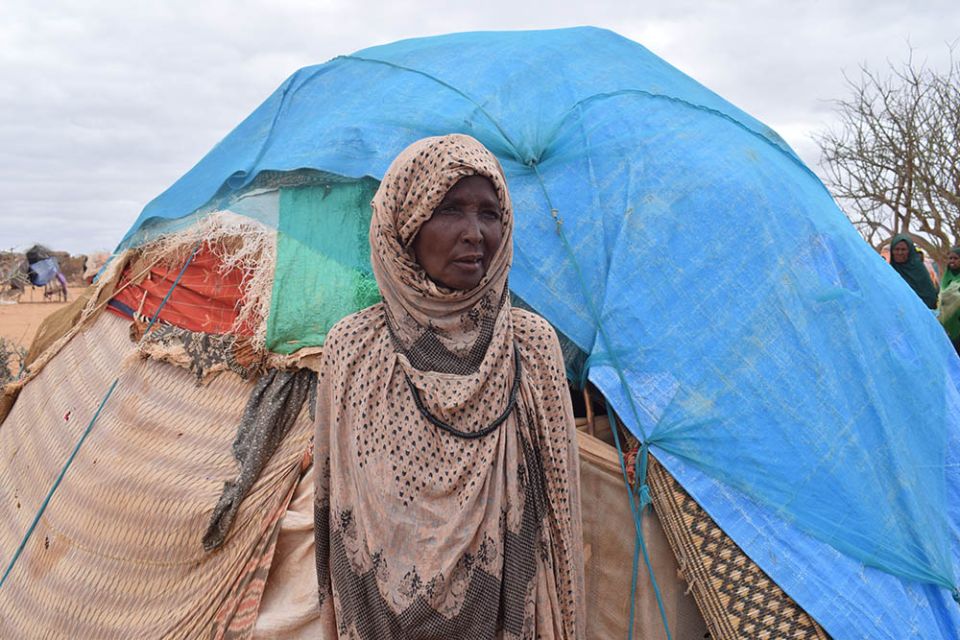 A woman forced to flee her home because of drought is pictured outside her tent in Qurdubay camp near Dolow, Somalia, April 13. (CNS/Trócaire/Miriam Donohoe)

"The disproportionate responsibility placed on Africa, which contributes less than 4% of the world's energy-related emissions but faces serious consequences to the lives and livelihood of its people, cannot be described as anything but climate injustice," Sameh Shoukry, Egypt's foreign minister and COP27 president-designate, said in closing remarks Sept. 2.

"We need bold and collective actions built on the principle of equity," he added, pledging that COP27 "is committed to ensuring that no one is left behind."

In June, the All Africa Conference of Churches, which includes 500 member churches, launched the Africa Faith Actors Network on Climate Justice with the goal of amplifying the work of churches and faith communities against climate change.

At its side event Aug. 30, themed "Faith in Action for Climate Justice," the network partnered with Pan African Climate Justice Alliance to help build the religious community's capacity on climate justice issues.

"The church needs to be the stewards on climate change. We need to commit to create awareness and engage our congregants on climate change," Jonathan Kapanga, Eastern Africa representative for the network, told EarthBeat. 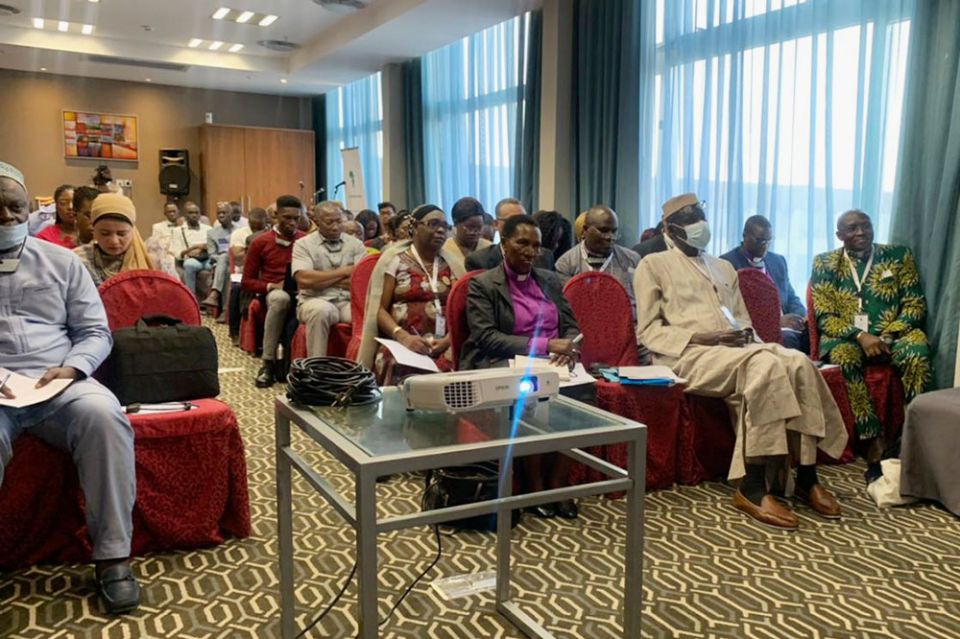 Faith actors from a variety of religious organizations, including the All Africa Conference of Churches, ACT Alliance and the Church of Uganda, attend a faith-focused side event Aug. 30 during Africa Climate Week. (Courtesy of Patricia Kombo)

Other faith groups present in Libreville were Act Alliance Africa, Christian Aid and the Church of Uganda.

Patricia Kombo, a climate change youth envoy of All Africa Conference of Churches, said that faith actors in Africa play a critical role ensuring their communities are "well empowered on climate resilience and mitigation."

"Whenever there is climate crisis, faith actors are always the first ones to offer humanitarian aid," she told EarthBeat. "So we thought it wise to bring them together to have a united voice and demand climate justice, as they understand better what climate crisis, and what loss and damage, is in their communities."

During its side event, the Africa Faith Actors Network on Climate Justice developed key asks for the COP27 presidency. The network urged COP27 restore the trust of the people by honoring the commitment to support adaptation and mitigation strategies in Africa and by making the Egypt summit fully inclusive by involving youths, women, Indigenous people and faith actors involved in the processes. 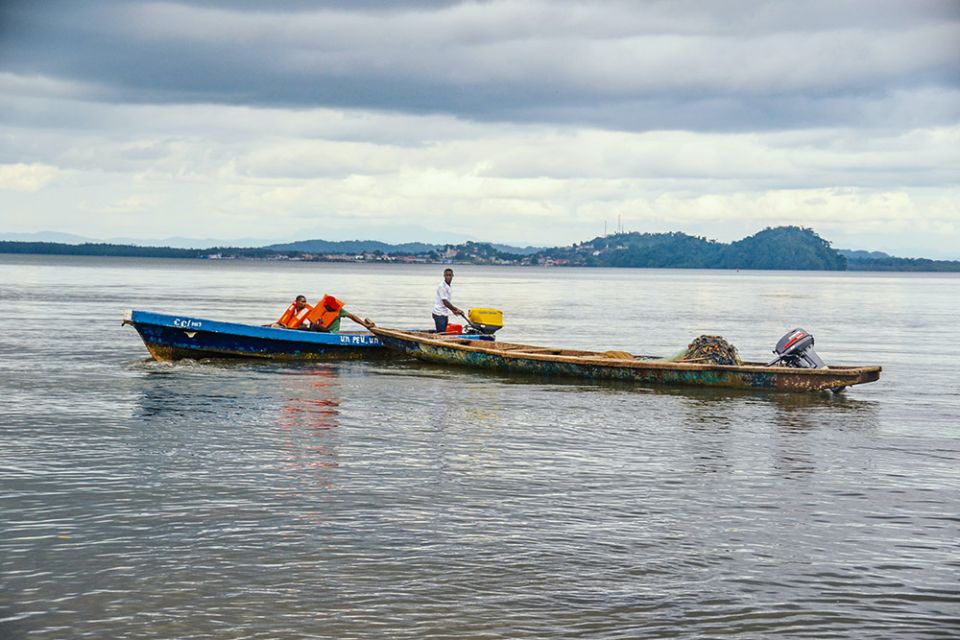 In a communiqué, the All Africa Conference of Churches and the Pan African Climate Justice Alliance demanded that loss and damage become a permanent priority agenda in climate negotiation processes at COP27, and that a special finance mechanism for loss and damage be established under Article 8 of the Paris Agreement that is separate from an adaptation fund.

The communiqué also asked the African Union to unite all African nations under a common voice ahead of COP27.

Africa Climate Week also saw much focus on climate finance, from ministerial dialogues on the challenges of mobilizing and accessing funds, to side events on at-scale investments to build the adaptation capacity of vulnerable people and communities. According to the African Development Bank, the continent will need to invest more than $3 trillion to implement all 54 countries' individual climate plans, known as nationally determined contributions, many of which are "conditional upon access to adequate financial, technical and capacity-building support."

In their communiqué, the All Africa Conference of Churches and the Pan African Climate Justice Alliance demanded new and additional short- and long-term financing, "based on the needs of the peoples of the Global South balanced between mitigation and adaptation" and by first fulfilling "the broken commitment" from developed countries to provide $100 billion annually to the Green Climate Fund by 2020. They also urged fast-tracking mechanisms for civil society organizations along with faith actors and their institutions to access climate financing. 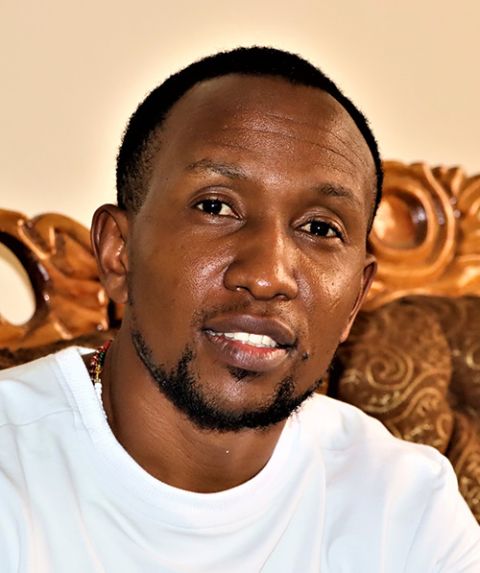 "There is need for serious commitment from governments on the Glasgow Pact on climate finance to keep its pledge, because Africa is suffering the brunt of climate change significantly," said David Munene, CYNESA programs manager who was recently elected as a regional facilitator for Africa representing major groups and stakeholders with the U.N. Environment Program.

An opportunity for Africa

Holding COP27, scheduled for Nov. 6-18, in Egypt provides an opportunity for increased engagement from African delegates, Munene told EarthBeat. Past summits, like last year's COP26 in Scotland, limited African participation, he said, due to travel expenses that squeeze budgets of delegations from African countries.

In a separate communiqué, the Pan African Climate Justice Alliance said that the summit in Sharm el-Sheikh "presents a unique opportunity post-Glasgow for the African people to expose and urgently address the massive and mostly ignored adverse impacts of climate change on the African people and also showcase climate solutions embedded within their traditional, Indigenous and local knowledge."

The Africa Climate Week took place a week before the beginning of the African Ministerial Conference on the Environment Sept. 12-16 in Dakar, Senegal, under the theme of "Securing people's well-being and ensuring environmental sustainability in Africa."

In his closing statement, Shoukry said that the discussions in Gabon "have reiterated the need to further accelerate climate action on all fronts, namely in adaptation, loss and damage, climate finance, and adopting more ambitious mitigation measures to keep the 1.5-degree target within reach.

"The geopolitical realities and energy crisis confronting the world have opened the door for backtracking on climate commitments and we must do everything to ensure this does not happen," continued the Egyptian foreign minister.

Said Gabon's Ondimba, "May Africa, the cradle of humanity, be the one to save it." 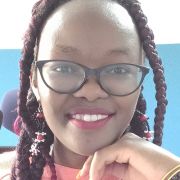 Teresia Gitau is a radio and news presenter at Radio Maria Kenya Nairobi, an environmental journalist and a member of Catholic Youth Network for Environmental Sustainability in Africa. She is the host of EcoGituKe Podcast. Follow her on Twitter and Instagram at @TeresiaGitau3.