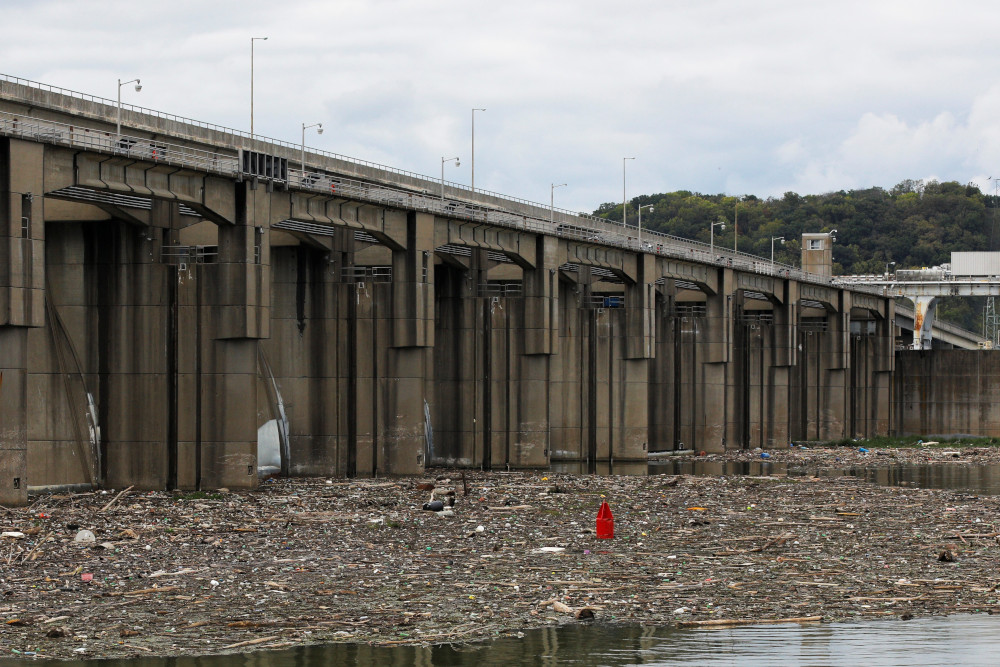 Garbage and debris pile up behind the Markland Locks and Dam on the Ohio River in Florence, Ind., Sept. 14, 2017. (CNS/Reuters/Brian Snyder)

The chairman of a U.S. Conference of Catholic Bishops' committee welcomed a White House action that will restore regulatory provisions that were in place for decades as part of a key environmental protection law.

Archbishop Paul S. Coakley of Oklahoma City, chairman of the Committee on Domestic Justice and Human Development, said April 25 that the provisions being restored under the National Environmental Policy Act will serve as "a vital guardrail against ecological and social harm."

The White House Council on Environmental Quality reinstated three provisions that require federal agencies to consider environmental impacts of infrastructure projects, including those associated with climate change. The restored regulations also will give local communities directly affected by such projects an opportunity for greater input in the approval process.

The council, under President Donald Trump, made broad changes to the NEPA regulations in 2020 to significantly reduce the scope and time frame of federal review under the law.

The Biden White House said April 19, however, that the changes led to challenges for federal agencies implementing them and confusion among stakeholders and the general public.

In announcing that the provisions were to be restored, Brenda Mallory, who chairs the Council on Environmental Quality, said in a statement they will "provide regulatory certainty, reduce conflict and help ensure that projects get built right the first time."

"Patching these holes in the environmental review process will help projects get built faster, be more resilient and provide greater benefits to people who live nearby," she added.

Archbishop Coakley noted that the USCCB opposed removal of the policies when they were implemented in 2020.

"At that time, we acknowledged the need to reform NEPA to be more efficient and effective, while also advocating for regulatory continuity," he said. "We are hopeful, therefore, that this new rule will set a trajectory for long-term stability in environmental regulation as our country continues to take steps towards environmental justice and stewardship," the archbishop said.

"This new rule is an opportunity to design infrastructure projects that promote authentic human development and stewardship of creation," he added.

The provisions take effect May 20.