An aerial view of Seattle is seen March 16, 2020. (CNS/Reuters/Lindsey Wasson)

Seattle — Four properties owned by the Archdiocese of Seattle and St. James Cathedral, including chancery offices, are being sold to developer Westbank to create a carbon-neutral community in Seattle's First Hill district.

"Creatively thinking about how we can better use our properties to achieve the mission of the church is exactly what we need to do as good stewards of God's gifts," Archbishop Paul D. Etienne said in a March 29 statement announcing the sale.

"This significant project is an investment in the First Hill community and in our future, ensuring we can continue the good work of the Catholic Church," he said.

The sales are an example of the archdiocese's Catholic Real Estate Initiative, announced last November, which is focused on redeveloping underused church buildings and land so resources and energy can be directed toward the church's mission.

The four properties being sold to Westbank are the St. James Cathedral Pastoral Outreach Center — but not the cathedral itself; two buildings that house chancery offices; and the Connolly House, once home to Seattle's archbishops. 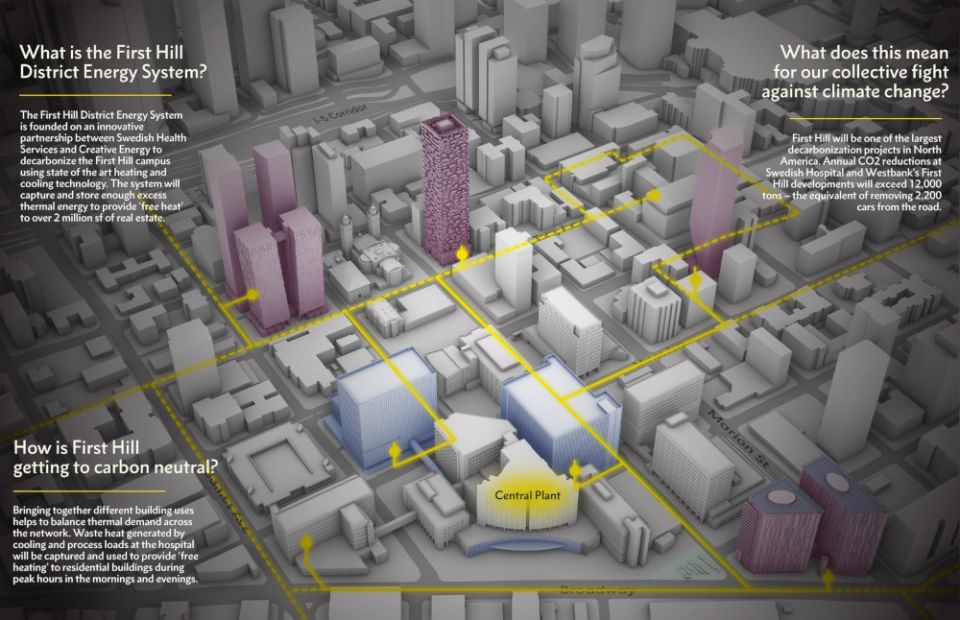 Westbank, a global developer based in Vancouver, British Columbia, is recognized for its long-term commitment to sustainable building. It plans to redevelop these properties over the next decade, creating a series of high-rise residential buildings with more than 1,300 dwellings to be connected to a new, environmentally friendly district energy system that greatly reduces greenhouse gas emissions.

As part of the agreement with Westbank, the historic Connolly House will be preserved, with development occurring around it.

"We believe this project not only demonstrates the environmental values outlined in Pope Francis' encyclical Laudato Si', but also represents a strong commitment to the future of the First Hill neighborhood," said a letter to archdiocesan Catholics signed by Archbishop Etienne; Fr. Michael G. Ryan, pastor of St. James Cathedral; and Joe Schick, the archdiocese's chief financial officer.

The proceeds from selling the four aging buildings, which are costly to maintain, will provide increased stability for the local church "so that we may continue to share Christ with others through outreach, evangelization and key ministries," the letter stated.

The archdiocese didn't release a sales price for its properties, noting that market appraisals determined the initial sales price, while the final price is subject to change, based on approved project plans.

Westbank founder Ian Gillespie said the company's initiative "will create low-carbon housing, infrastructure and amenities that will serve Seattle for generations to come."

The St. James Cathedral Pastoral Outreach Center and the Paul Pigott Building, seen in the background, are among four properties the Archdiocese of Seattle and St. James Cathedral are selling to Westbank. The Vancouver, British Columbia, developer plans to create a carbon-neutral residential community in Seattle's First Hill neighborhood. (CNS/Northwest Catholic/Jean Parietti)

The project also will generate approximately $25 million for a Seattle municipal housing fund earmarked for organizations such as Catholic Housing Services that build low-income and workforce housing, the archdiocese said.

The archdiocese is exploring several options — including staying on First Hill — for a location where it can consolidate its 125 employees, who are now spread among four buildings. A decision is expected by early 2023, but a move isn't anticipated until at least 2025, the archdiocese said.

The archdiocese also will sell two properties to St. James Cathedral: one that now houses the Office of Catholic Schools and other archdiocesan offices, and the top two floors of Cathedral Place; St. James already uses the first two floors.

Besides providing space for the parish to expand its offerings, the sale and acquisition will "secure a much-needed 'nest egg' to ensure that our ministries of outreach, faith formation, music and the arts continue," Ryan said. The sale also will provide funds to maintain and preserve the parish's historic buildings — the cathedral, the rectory and Cathedral Place, he said.

The district energy plan began in 2021, when it was announced that Westbank and Creative Energy are partnering with Swedish Health Services, an affiliate of the Catholic Providence Health organization, to modernize the infrastructure on its First Hill campus.

As part of the project, Swedish will be able to divert excess heat from its campus to an energy-sharing platform that will become a source of heating for other buildings connected to the platform.

The project, which Westbank's Gillespie said will significantly reduce the carbon footprint of the First Hill neighborhood, is part of the commitment Swedish and Providence have made to be carbon negative by 2030.

Besides the environmental benefits of the project, Ryan noted in his letter that Westbank also values the importance of the cathedral, seeing it "not just as the crowning glory of the First Hill of bygone days, but as the heart of the First Hill of the future. I like the thought that the development of the neighborhood will not detract from the cathedral's presence, but will point to and enhance it," Ryan added.

In their joint letter, the archbishop, Ryan and Schick thanked all those involved in "bringing the Catholic Real Estate Initiative to life on First Hill. ... We feel very blessed to be part of this exciting development and very grateful for the hope it brings for the future of First Hill and for the Catholic presence in our city."