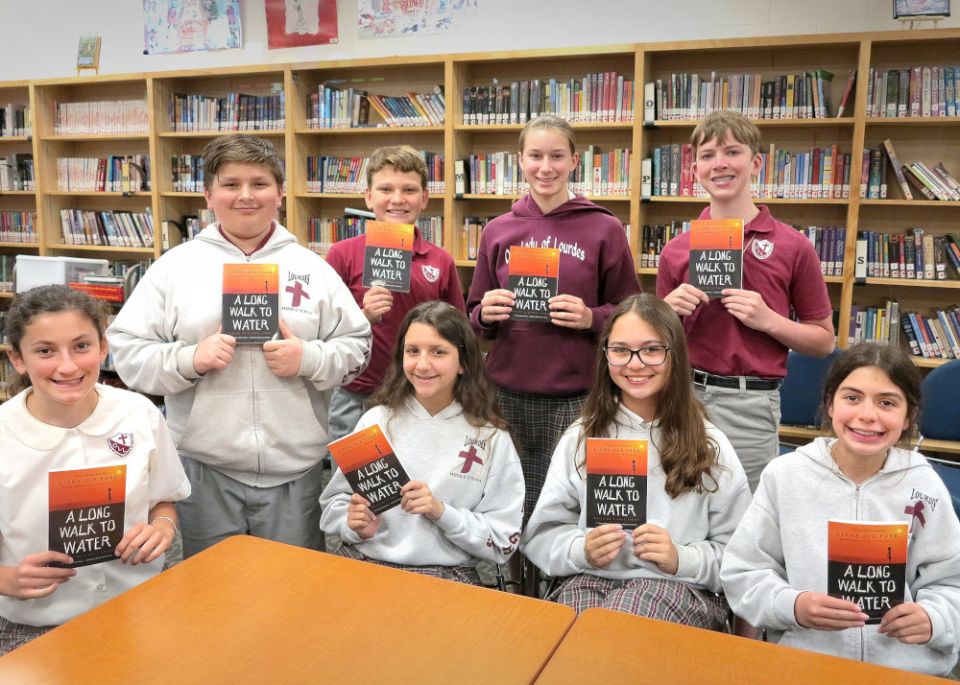 Seventh graders at Our Lady of Lourdes School in Slidell, La., pose for a photo with the book "A Long Walk to Water," a nonfiction novel by Linda Sue Park. The book spurred the students to raise funds for a nonprofit that drills water wells in South Sudan. (CNS/Clarion Herald/Beth Donze)

Slidell, Louisiana — After reading A Long Walk to Water, a nonfiction novel written by Linda Sue Park, the eight seventh graders in Tess Veazey's honors reading class at Our Lady of Lourdes School in Slidell sprang into action.

Learning that clean and accessible water was a luxury to many residents of South Sudan, Veazey's students raised $400 for a nonprofit that drills water wells in that African country.

But what is even more impressive is how they raised the funds: They voluntarily gave up drinking all beverages except water for the time period of their choice — from one to three weeks — receiving pledges from friends and family. 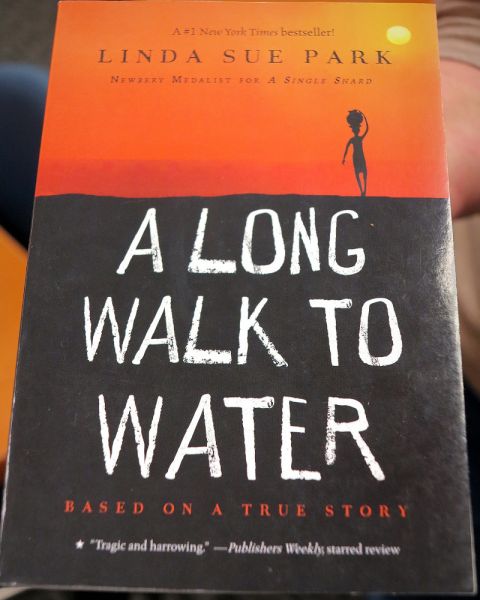 This is the book cover of "A Long Walk to Water," a nonfiction novel written by Linda Sue Park. (CNS/Clarion Herald/Beth Donze)

"It was harder than I realized, because normally you wake up and drink milk or go home and have a soft drink," seventh-grader Mallory Dauzat told the Clarion Herald, newspaper of the Archdiocese of New Orleans.

A New York Times bestseller written in 2010, A Long Walk to Water is based on the true story of Salva Dut, who was separated from his family at age 11 due to the civil war raging in South Sudan in the mid-1980s. After a decade of living in refugee camps in Ethiopia and Kenya, Dut immigrated to the United States in 1996.

He later learned that his father had survived the war but was deathly ill with a condition that was highly preventable: waterborne parasites from consuming dirty drinking water.

Since 2005, Water for South Sudan has drilled 500 water wells, each of which provides clean and accessible water to 500 to 1,000 residents.

"The book changed my life because I didn't realize that some people in parts of Africa don't have access to clean water — they have to boil it, and if they can't boil it, they just drink it dirty, then they get sick and some die," said seventh-grader Tristan Alonso. "Some people might walk two miles (for water); some might walk 12."

"Every time I drink a bottle of water I think about how lucky I am to have it, and how many people don't have that opportunity," added Kayden Wortmann.

The book also informed the seventh graders of the ripple effects of drilling water wells: New schools get built in recipient villages, and students tend to stay in school, now that they do not have to help their families procure potable water.

Zackary Walker was so committed to the endeavor, he gave up nonwater beverages for the full three weeks of the fundraiser. His uncle also joined in the effort as a show of solidarity.

"It's not about how much you give," Zachary said, "It's about what (the money) does."