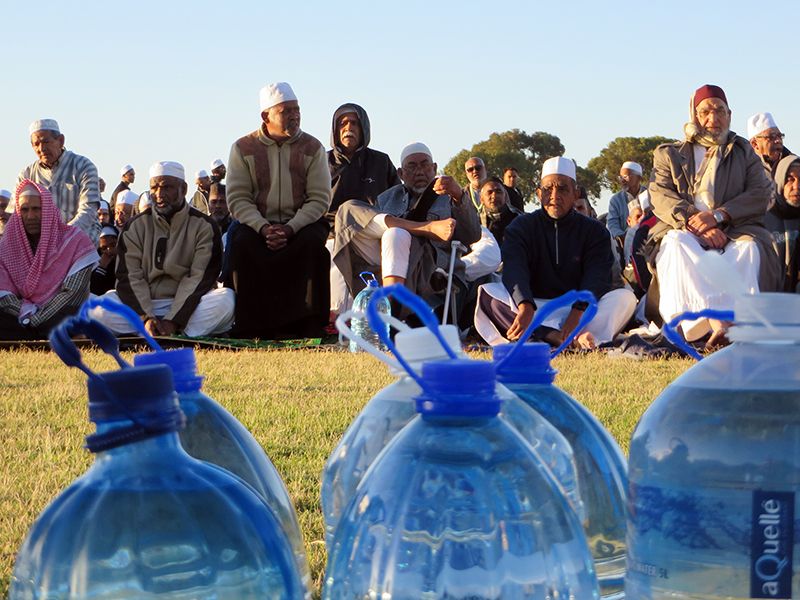 The Muslim Judicial Council South Africa joined Habibia Soofie Masjid and Masjidul-Quds to lead more than 1,000 Muslims in an early morning prayer for rain at the Rylands sports complex in Athlone, Cape Town, on Feb. 4, 2018. Worshippers donated bottled water, foreground, and many mosques throughout Cape Town have installed aerators on taps or are providing worshipers with spray bottles or single cups of water to perform ablutions. (RNS/Brian Pellot)

Cape Town, South Africa — The trickling sound echoed through Zonnebloem Estate's chapel as the Anglican bishop of Table Bay, the Rt. Rev. Garth Counsell, slowly poured one pitcher of water into another. 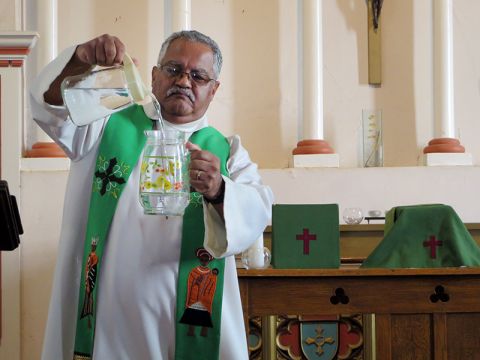 The Anglican bishop of Table Bay, the Rt. Rev. Garth Q. Counsell, slowly pours one pitcher of water into another before beginning his sermon at Zonnebloem Estate’s chapel during the Anglican Diocese of Cape Town’s Water (In)Justice Conference on Feb. 3, 2018. (RNS/Brian Pellot)

This sound of running water, once considered soothing, now triggers anxiety in drought-stricken Cape Town, where residents are hoarding bottled water and showering over buckets in anticipation of "Day Zero."

Currently estimated for mid-May, Day Zero would mark the unprecedented moment when engineers close most of the city's faucets. Nearly 4 million residents would be left to fetch daily water rations of just 25 liters (6.6 gallons) from fewer than 200 central collection points until rains resume or alternative sources come online.

Government officials have provided scant details for Day Zero logistics. Rather than communicate a clear plan of action, some are invoking fear with comparisons to World War II and 9/11.

Major political parties and faith groups in South Africa have long recognized the toll climate change is taking on citizens and the environment. As tensions rise and politicians point blame in every direction, faith groups are working across spiritual divides to offer their flocks hope and a way forward.

"We have stopped major crises in the history of our country, and even this one will come to pass," Anglican Archbishop of Cape Town Thabo Makgoba told the room, later referencing the HIV/AIDS epidemic and apartheid. Makgoba takes issue with the apocalyptic connotations of the name "Day Zero" and suggested parishioners consider "Day One" —  his preferred term for the same scenario — as an opportunity for action.

"From a biblical perspective, the concept of void and nihilism does not sit well, because we take the creation story seriously," he explained. "Zero has the connotation that this is the end. It doesn't give us hope. But we are responsible. We can do something. We can avert it."

The Rev. Rachel Mash, environmental coordinator for the Anglican Church of Southern Africa and Green Anglicans, organized the conference, which featured practical water-saving tools and ideas. Goody bags included dense green plastic blocks participants were advised to drop in their toilet tanks at home to save water.

"Our job as the church is to reduce water ourselves, inspire others to reduce water, share ideas on how to do that, get the message out into the community, and avert Day Zero," Mash said.

The Anglican Diocese is performing environmental audits on individual parishes and fixing leaks. If or when the countdown to Day Zero drops below 30 days, Mash said the denomination plans to install crisis committee representatives at each parish to help coordinate water home delivery for vulnerable people of all faiths and none. 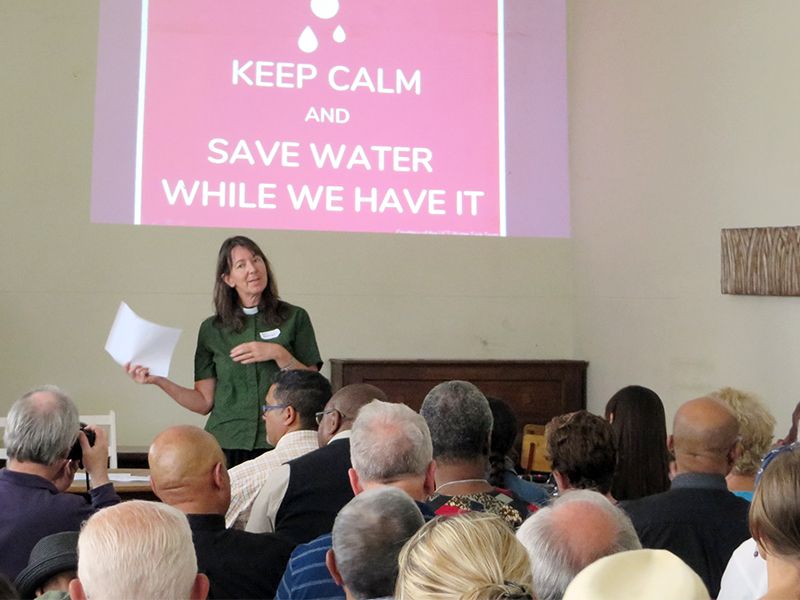 The Rev. Rachel Mash, environmental coordinator for the Anglican Church of Southern Africa and Green Anglicans, organized and presents at the Anglican Diocese of Cape Town’s Water (In)Justice Conference at Zonnebloem on Feb. 3, 2018. (RNS/Brian Pellot)

"If we do need to be queueing for water, it would be helpful if faith leaders are there to help marshal and to make sure the elderly, vulnerable, pregnant mums, etc., aren't standing in the hot sun for hours," she said.

Mash invited fellow Anglican and "water prophet" Kevin Winter of the Future Water Institute at the University of Cape Town to address the conference.

"We've always imagined climate change as being a slow-moving bus, but we need to recognize that there are speed bumps along the way, and we're going through one right now," he said.

Winter's ultimate message: "Keep calm and save water while we have it." 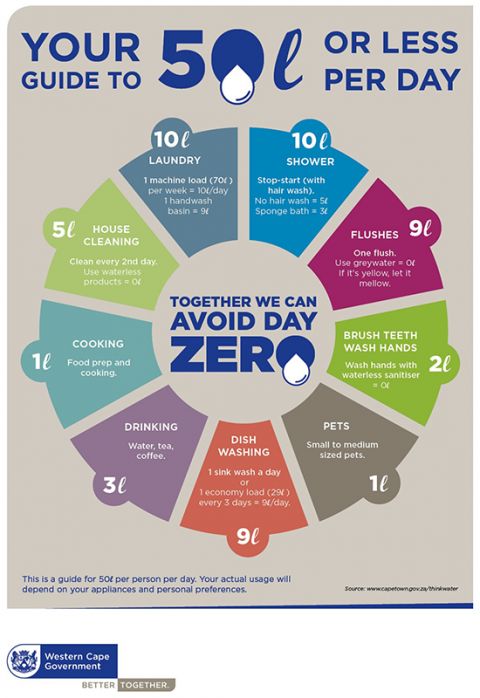 “Your guide to 50 liters or less per day.” (Courtesy of Western Cape Government)

The Rev. Ronald Dias attended the conference from St. Dominic Church Parish in the township of Hanover Park, where he says water quality is already a problem.

"We have a borehole (water well) at the church, but the police stopped us from using that," he said. "The water is running very low, and the pressure is very low. What will happen to our soup kitchen on Wednesday mornings? That requires water."

New water restrictions came into effect Feb. 1, regulating the use of borehole water wells and limiting Cape Town residents to just 50 liters (13.2 gallons) of water per day. By comparison, the U.S. Geological Survey estimates that Americans use 80 to 100 gallons of water each per day.

These numbers, and the growing panic in Cape Town's wealthy and middle-class neighborhoods, belie a grim reality, Mash is quick to point out.

"Because Cape Town is such an unjust society, the leafy suburbs have always had enough water for swimming pools and totally ignored the fact that on the other side of the city people don't have enough water to even throw into their toilet, and they're sharing one toilet between 20 families," she said.

On Sunday, the Muslim Judicial Council South Africa joined Habibia Soofie Masjid and Masjidul-Quds to lead more than 1,000 Muslims in an early morning prayer for rain.

Men at the front, women at the back, gathered on green patches of grass at the Rylands sports complex, where signs warned that the nonpotable grey water keeping the field alive is "not suitable for human consumption." 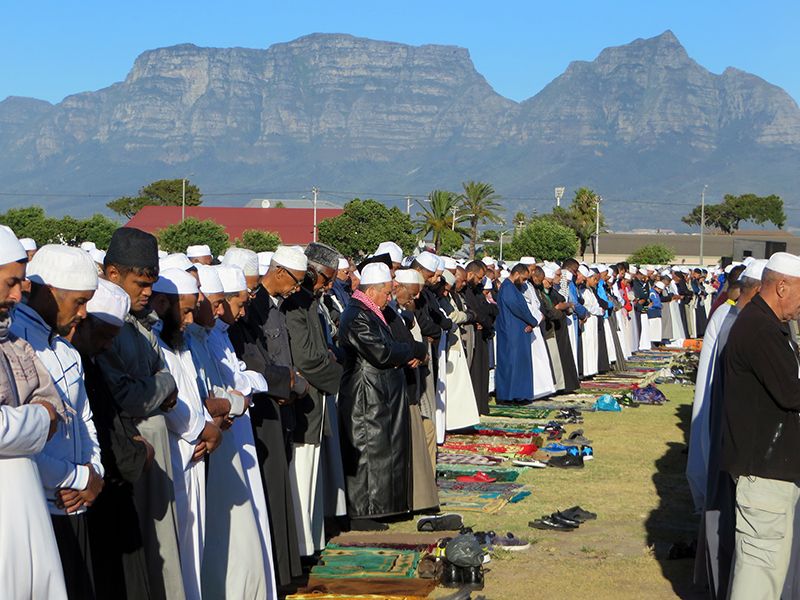 More than 1,000 Muslims from multiple mosques gather in an early morning prayer for rain at the Rylands sports complex in Athlone, Cape Town, South Africa, on Feb. 4, 2018. (RNS/Brian Pellot)

"Each and every person must ask, 'Where did I go wrong?' We have done so much wrong. The consequences have brought us to where we are today," said Sheikh Moegamad Moerat of Zeenatul Islam mosque. "Once we live in halal, Allah will send us beneficial rain."

"The root cause is the way we live, the sins we commit," added Sheikh Riad Fataar, second deputy president of the judicial council. "You have a hand in it, and you can correct it."

Several imams encouraged worshippers to pay zakat, obligatory alms, citing a hadith attributed to the Prophet Muhammad that Allah withholds rain for those who withhold their charity.

"The importance of washing ourselves and obtaining a state of purity is important, but more important is finding spiritual purity. Islam enjoins us that when water is scarce you can make your ablution with pure sand," he said.

For now, many mosques throughout Cape Town have installed aerators on taps or are providing worshippers with spray bottles or single cups of water to perform ablutions.

"We are praying not only for G-d to bring the rain, but also for G-d to give wisdom and insight to all levels of government – national, provincial and city – to guide them in the right direction to find solutions for the water crisis," Goldstein told RNS by email.

Beyond individual faith groups' efforts, several ecumenical and interfaith initiatives have emerged to address the water crisis and "soak the city in prayer." In May, Cape Town Mayor Patricia De Lille hosted interfaith leaders at the foot of Table Mountain to pray for rain.

"When the interfaith voice opposed apartheid as a movement, it worked," Makgoba said. "This is a struggle and a crisis. We need to be good stewards. It's a beautiful opportunity for South Africans to come together. And therein lies our hope."

A version of this story appeared in the Feb 23-March 8, 2018 print issue under the headline: Water crisis in Cape Town nears 'Day Zero' .