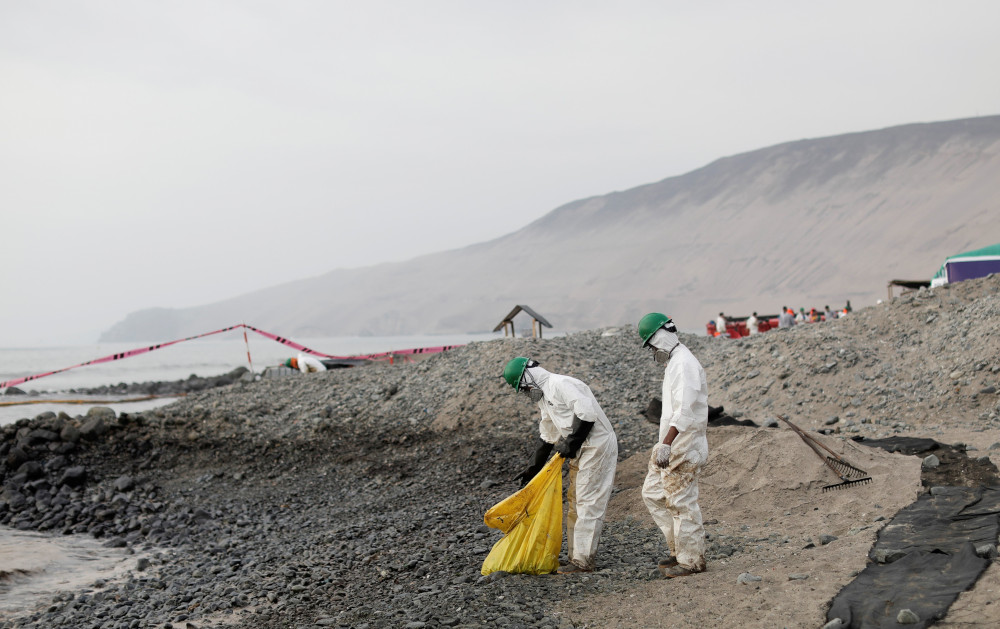 Workers clean up an oil spill on the beach near Repsol's La Pampilla refinery that caused an ecological disaster on the coasts of Lima, in Ventanilla, Peru, in this Jan. 29, 2022. (CNS/Reuters/Angela Ponce)

"We need a community that supports and helps us, in which we can help one another to keep looking ahead," he said, quoting Pope Francis.

"By ourselves, we risk seeing mirages, things that are not there. Dreams, on the other hand, are built together," he continued, citing the pope's encyclical, "Fratelli Tutti, on Fraternity and Social Friendship."

The cardinal, who is interim president of the Dicastery for Promoting Integral Human Development, made the remarks in a talk at the Pontifical Urbanian University in Rome March 30. The university was dedicating a series of talks to the pope's 2020 encyclical.

The pope's second encyclical, "Laudato Si', on Care for Our Common Home" from 2015, offers a precise picture of the current ecological crisis and "a lucid diagnosis of the situation," the cardinal said.

"Fratelli Tutti" then is offered as "an attentive analysis of its causes and a denunciation of those responsible. Francis points to the 'throwaway culture' as one of the obstacles to true integral development," he said.

"It is necessary, then, to change approach and admit the urgency of building a 'we' that lives in the common home" of creation, Cardinal Czerny said.

"Fraternity becomes the path to salvation, because it shows the founding insight of the Gospel in the communion among people and with God," that the best way of life upholds the dignity of the human person, he said.

He reiterated the pope's desire "that, in this our time, by acknowledging the dignity of each human person, we can contribute to the rebirth of a universal aspiration to fraternity."

It is a matter of knowing "how to dream and to turn our life into a wonderful adventure. No one can face life in isolation," he said, quoting the pope's encyclical.