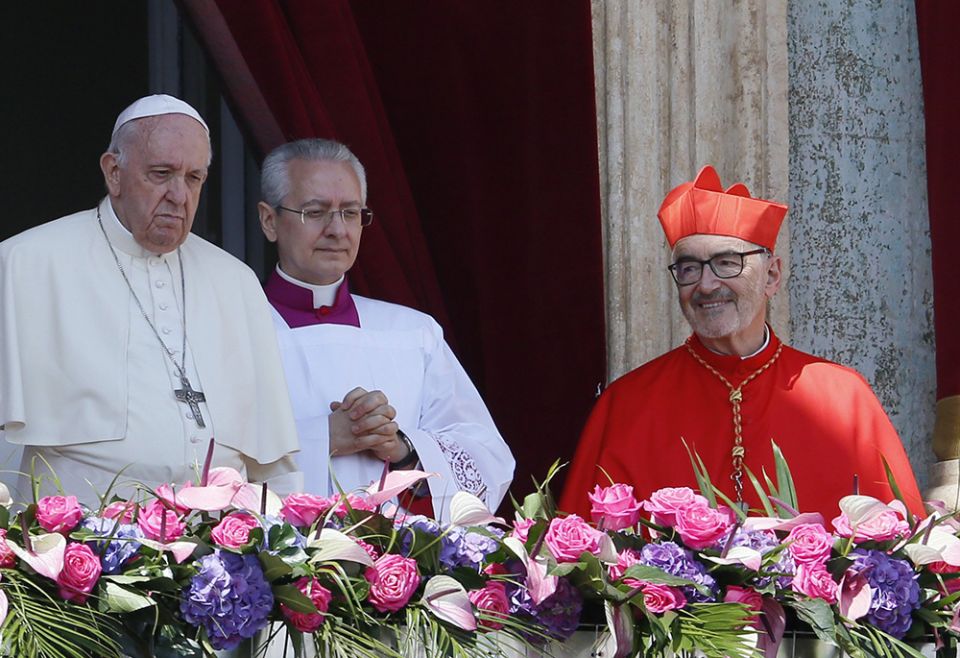 Cardinal Michael Czerny looks on as Pope Francis delivers his Easter message and blessing "urbi et orbi" (to the city and the world) from the central balcony of St. Peter's Basilica at the Vatican April 17. The pope has named Cardinal Czerny as the new prefect of the Dicastery for Promoting Integral Human Development. (CNS/Paul Haring)

A true system of global sustainable development hinges on recognizing others as siblings in a shared world whose dignity and rights must take precedence over corporate interests, said a top Vatican official this week.

As new economic models emerge and the world increasingly becomes a global marketplace, seeing one another as siblings is essential to upholding the human rights of all, said Cardinal Michael Czerny, the recently appointed head of the Vatican Dicastery for Promoting Integral Human Development.

But viewing that human fraternity through a lens of individual liberties "threatens the universality of human rights," he said. "The same is true of the absolute and unquestionable freedom of the market: the rights of commercial enterprises cannot be put before the dignity of the poor or the care of the environment.

"The right to human development cannot be subjected to any calculation of profit, nor to any claim of social utility, which ends up justifying the option to leave the weaker or less gifted behind," he added.

Czerny made the remarks April 26 during a virtual conference co-hosted by two Canadian universities. The speech was one of the first Czerny delivered in his new role after Pope Francis removed the interim tag from his title three days earlier.

The speech also came months ahead of an expected papal visit to Canada this summer, where Francis is expected to meet with Indigenous people in the wake of a national reckoning around abuses at church-run residential schools after mass graves were uncovered in recent years. Czerny, who as a child moved with his family from Czechoslovakia to Montreal, said he hopes the papal trip, along with Francis' recent apologies at the Vatican, will bring about a new stage in the church's relationship with Indigenous people. 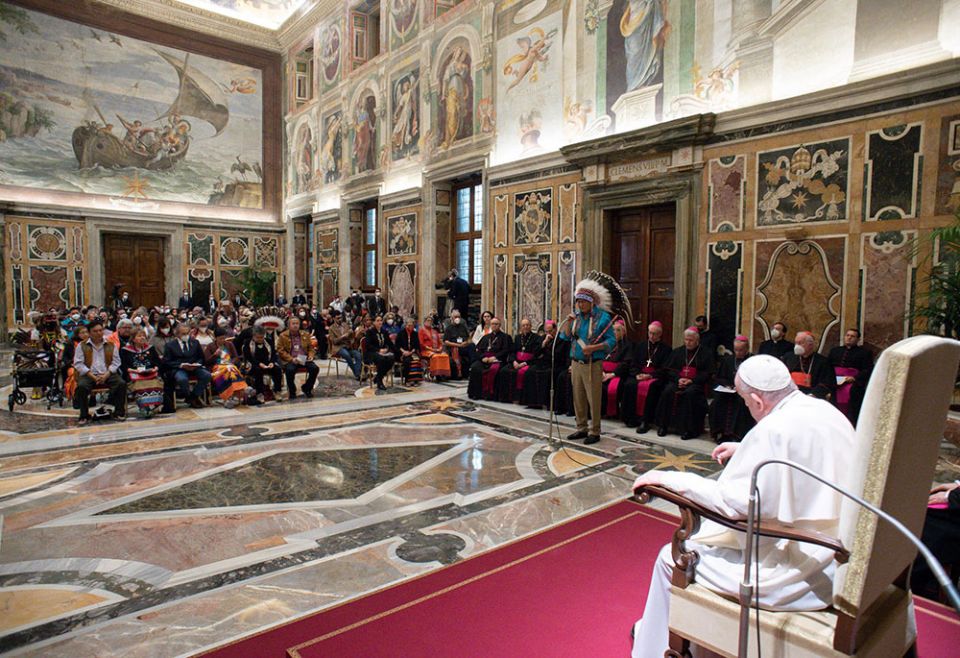 Pope Francis meets with with Indigenous elders, knowledge keepers, abuse survivors and youth from Canada, along with representatives of Canada's Catholic bishops in the Vatican's Clementine Hall April 1. (CNS/Vatican Media)

"I believe there is a movement away from colonial and contemporary injustice and toward all being siblings in social friendship," the cardinal said.

The half-day online conference explored the Catholic Church's contribution to global sustainable development, both in a diplomatic role in world affairs and through the laity. The conversations among the panelists drew heavily from Francis' two encyclicals, "Laudato Si', on Care for Our Common Home" and Fratelli Tutti.

In 2015, all member countries of the United Nations adopted the 2030 Agenda for Sustainable Development, consisting of 17 sustainable development goals to collectively reach within 15 years. Among them: eliminating poverty, promoting gender equality, reversing biodiversity loss and limiting climate change.

But the world has made limited progress on those goals. The COVID-19 pandemic dealt the agenda a massive blow, with the World Bank estimating that millions of people have fallen back into poverty in the past two years. The Russian invasion of Ukraine has also drawn increased international attention, and in some cases, has resulted in a doubling down on fossil fuel use.

"Simply put, we are currently facing a crisis in global sustainable development," said Michael Manulak, an assistant professor in the Norman Paterson School of International Affairs at Carleton University, which organized the conference along with the University of St. Michael's College in the University of Toronto.

Manulak added that the current world landscape, particularly on climate change, makes Laudato Si' more relevant today than when it was issued in 2015. Referencing the latest report from the Intergovernmental Panel on Climate Change, he said it "paints a stark picture" of challenges facing countries this decade to rein in rising temperatures — what he called "a fundamental prerequisite to achieving sustainable development and integral human development on a global level." 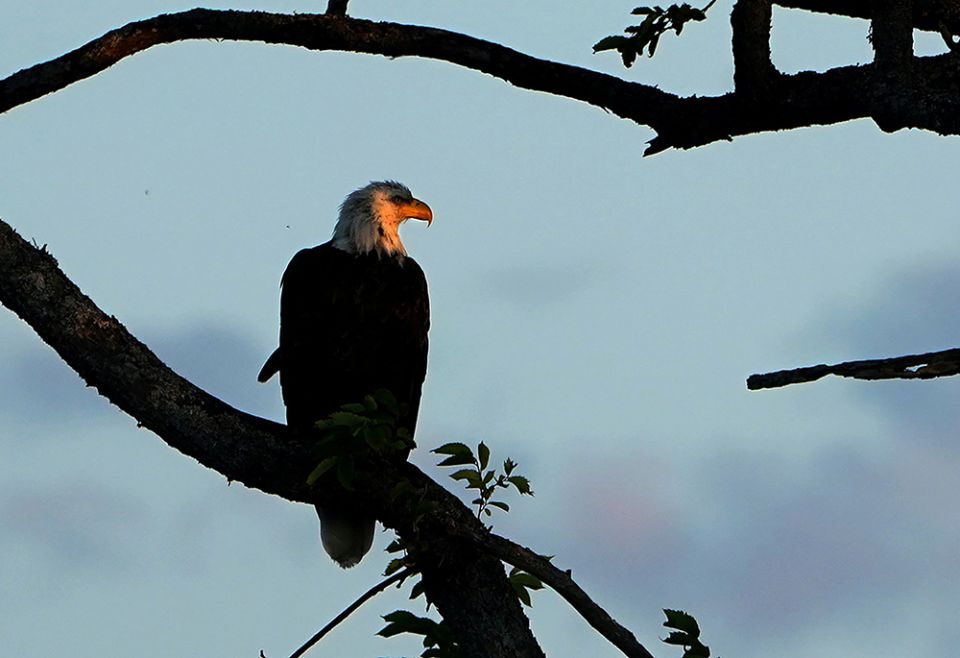 A bald eagle is pictured in a file photo perched in a tree in Baddeck, Nova Scotia. (CNS/Reuters/Carlo Allegri)

Delivering the opening keynote address, Czerny said at the core of integral human development is the recognition that fulfillment of each person's potential is a right for all people and a responsibility for all to uphold. He said the church in its diplomacy keeps focus on the goal of the common good, and when necessary, calls out obstacles to it.

The cardinal said that in Fratelli Tutti, Francis states that an understanding of liberty and equality must begin with "consciously cultivated" fraternity, and that the individual is best understood "within the fabric of a social 'we.' " Seeing fellow people as siblings goes beyond national borders, Czerny said, and the promotion of integral development is also a responsibility from nation to nation, especially for more advanced economies.

"If we do not recognize that every human being has a fundamental and inalienable right to his or her integral development, then 'there will be no future either for fraternity or for the survival of humanity,' " Czerny said, quoting Fratelli Tutti. 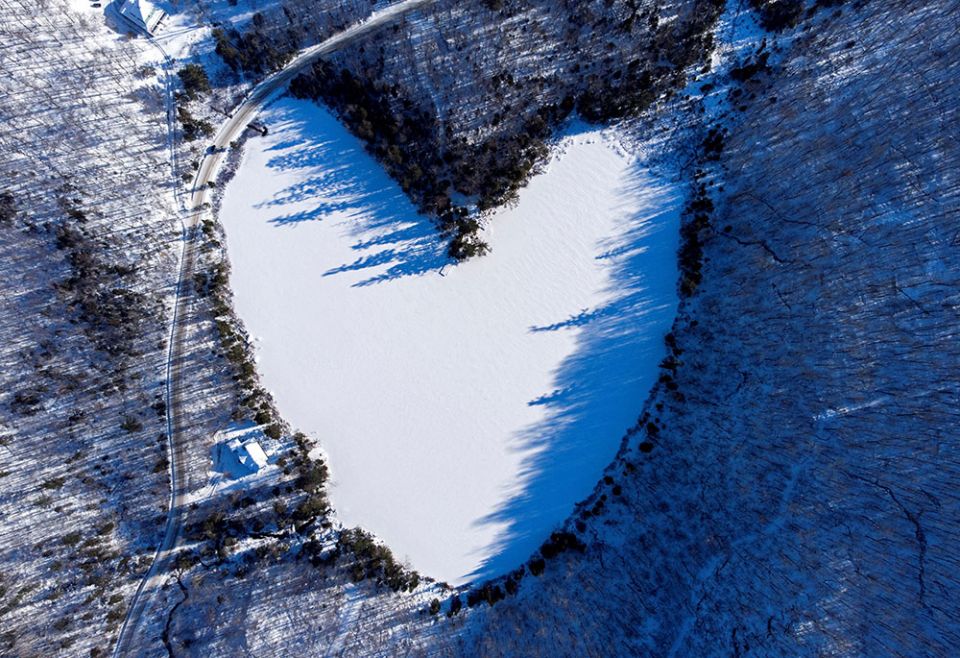 Séverine Deneulin, director of international development for the Laudato Si' Research Institute based at Oxford University's Campion Hall, said that a major contribution the church can make is in changing the current narrative around global sustainable development.

"Because as it stands, sustainable development encompasses green growth, net zero [greenhouse gas emissions], but we can continue with business as usual" rather than make changes to address problems with current development models, she said.

Deneulin pointed to problems arising from the growth of clean energy. The push for electric cars, for instance, has led to increased demand for rare earth minerals like copper, cobalt and lithium, which in turn has resulted in more mining — an industry whose history is rife with land disputes and human rights violations — and with it more instances of water scarcity and infringements on lands of Indigenous communities, particularly in Africa and the Global South.

"So this so-called green solution is not working, either, and it does create injustice," she said. "And the role of the church is precisely to highlight these injustices and these connections, too."

Beyond that, Deneulin said the church can not only propose a new narrative around development, one "of solidarity and personal and structural ecological conversion," but then must also promote it and live it out through the church's actions and institutions with programs like the Vatican's Laudato Si' Action Platform, an initiative launched by the integral human development dicastery. 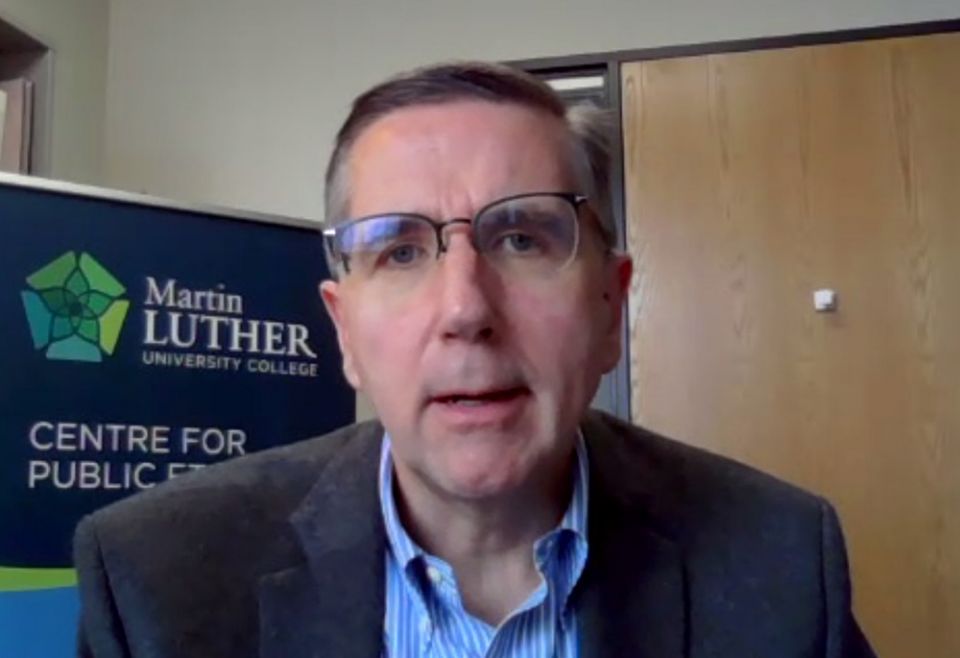 Should all Catholics in Canada not only call for action on climate change but also support the lifestyle changes and sacrifices it would require, it "would bring about a sea change," said John Milloy, director of the Centre for Public Ethics at Martin Luther University College and a senior staff member of former prime minister Jean Chrétien.

"As Laudato Si' reminds us … we can't leave [political issues like climate change] to the market to sort out, as Catholics we have a duty and a responsibility to get involved in a real and meaningful way to our political system," he said.

Panelists suggested that Canadian Catholics can engage the work of integral human development through organizations like Development and Peace, the Canadian church's Caritas affiliate, Jesuit Refugee Services and a Canadian-based chapter of the Laudato Si' Movement, which recently produced an eco-investment accelerator toolkit to examine redirecting finances from fossil fuels toward cleaner alternative energy sources.

The ongoing process of reconciliation and decolonization around the church's relationship with Canadian Indigenous communities also provides a path for Catholics and the local church to embrace integral ecology, the panelists said.

"It's only when their voice is at the table, that the change will happen," Cafiso of Canadian Jesuits International said.

While the church has sought to play a leading diplomatic role, perhaps its greatest means to influence international discussions is by supporting grassroots social movements and the people and communities at the front lines of environmental destruction, panelists said. Several pointed out that many of the overseas mining companies are based in Canada, providing an opportunity for the nation's Catholics to press businesses to ensure human rights protections.

While the pandemic has led many people to prioritize individual liberties and push back against public health measures, several panelists agreed that church teaching on integral human development can play a key role in disrupting turns inward toward instead solidarity and working together to create a better world for everyone.

"If we do want to apply Catholic social teachings, we cannot do that in isolation. It's not a private conversion. It's a global action," Cafiso said.