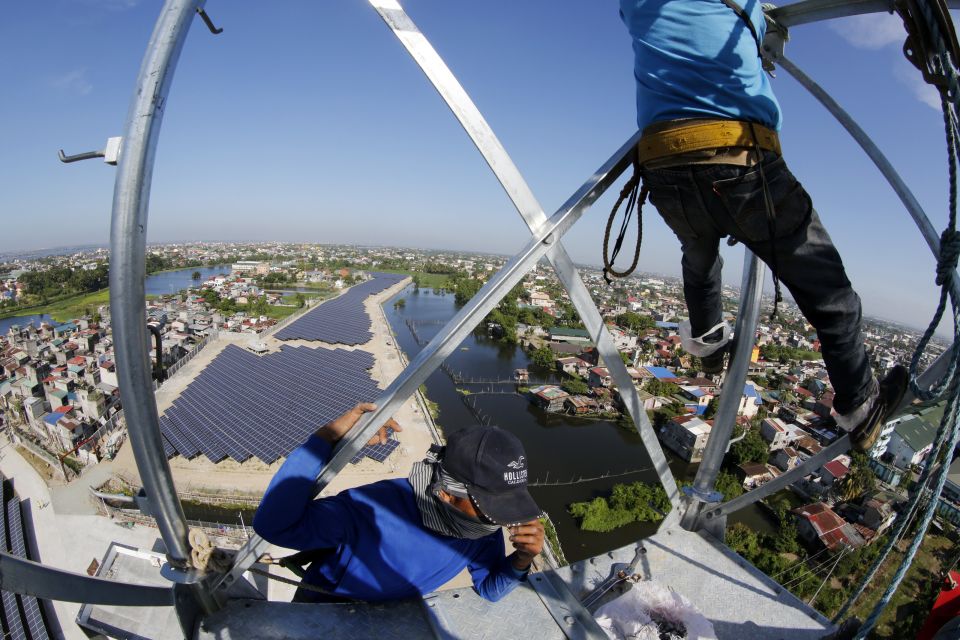 In this 2015 file photo, Filipinos build a solar farm tower in Valenzuela, Philippines. Caritas Philippines and the Philippine Catholic bishops' conference is doubling efforts to promote the use of renewable energy to light up poor communities around the country. (CNS/EPA/Francis R. Malasig)

Manila, Philippines — The social action arm of the Philippine Catholic bishops' conference is doubling efforts to promote the use of renewable energy to light up poor communities around the country.

Caritas Philippines has partnered with a local solar power system provider to accelerate the country's transition to renewable energy and to facilitate the "eradication of energy poverty," ucanews.com reported.

Of the country's 85 dioceses, 43 already are in the process of installing and fully employing solar panel systems as alternative sources of power.

"We are set to bring this renewable power system to far-flung and off-grid communities," said Jing Rey Henderson, communications officer at Caritas Philippines.

Henderson said the organization is coordinating with local power distributors in the provinces to help facilitate the storage of generated solar power and its distribution to communities.

"This is a clear message to everyone that the church is serious in its energy campaign amid the failings of the government to implement the renewal energy law," Bishop Arturo Bastes of Sorsogon said.

Archbishop Rolando Tria Tirona, national director of Caritas Philippines, said the inauguration of the pilot sites is a "historic event" and the country's "concrete response" to Pope Francis' call to care for our common home.

Chris Cantal, the company's associate business development manager, said the firm saw the partnership as "an opportunity to help the church realize the message of Pope Francis' encyclical, "Laudato Si', on Care for Our Common Home."

"As Catholics, we are called to act on the how we could assist Filipinos to minimize dependence on dirty energy," Cantal said.

Philippine Catholic leaders have been vocal in their opposition to "dirty energy sources" that they claimed only benefit large corporations and businesses.

Fr. Edwin Gariguez, executive director of the bishops' social action secretariat, said the church always considers coal as an energy source to be "dirty and destructive."

There are 28 existing coal-fired power plants in the country. Despite strong opposition from environmental groups, the power plants continue to operate, providing about 32 percent of Philippines' electricity, according to Energy and Natural Resource Market Reports.