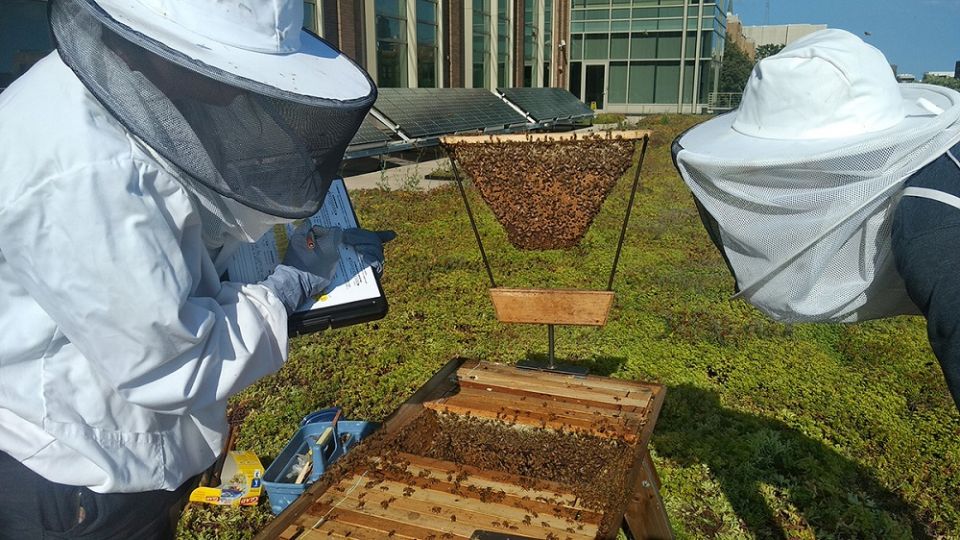 For the past year, tens of thousands of bees have swarmed onto the Marquette University campus, and so far, no one's complaining.

Rather than arriving as unwanted pests, the honeybees were welcomed guests to the Jesuit college in downtown Milwaukee, as part of a campus ministry program to learn more about the pollinating insects while also better engaging the local neighborhood, and to destigmatize both.

"This is students and folks from the community learning together and working together to maintain the hive," said Gerry Fischer, associate director of campus ministry who oversees the Midnight Run student service program that brought the bees to Marquette in June 2017.

The hive of bees, a population of roughly 20,000 in the winter and as many as 60,000 during the summer months, rests atop a second-floor green roof of Marquette's LEED-certified Engineering Hall. Through a Midnight Run project called Bee the Change, students serve lunch to area homeless and low-income people, and afterward, invite them to the hive to learn about bees together.

"What we're trying to say is … that bees are essential and important to life as we know it; we just don't know it. So let's learn about it," said Charlie "CharBee" Koenen, an area beekeeper/enthusiast who leads the lessons.

Marquette is not alone among Catholic campuses spreading the buzz about bees.

As part of its Bee Campus certification, the student group Gonzaga Environmental Organization held a series of bee-awareness events during the week around Earth Day (April 22), including screening the 2012 documentary "More than Honey." They highlighted the ways the campus has worked to be more bee-friendly, such as planting pollinator-friendly plants and pledging to end the use of pesticides and insecticides. In October, about two dozen students assisted in prepping the hive for winter, collecting the last of the approximately 45 pounds of honey produced for the year (a bit less than the high of 60 pounds in 2016) and even taking some of it home.

"I thought it seemed like a really cool project to be involved in," said Claire Henson, a senior biology major who helped lead Gonzaga's Bee Campus effort.

Overall, 33 U.S. colleges have been deemed Bee Campuses, along with 62 cities. The programs aim to raise awareness about the importance of pollinators like honeybees to the world — responsible for pollinating 90 percent of wild plants and trees — and also to develop more sustainable habitats for such insects to thrive.

The United Nations recently declared May 20 as World Bee Day, in an effort to draw global attention toward preserving bees and other pollinators.

One-third of the nation's estimated 2.78 million managed honeybee colonies were lost between April 2016 and April 2017, according to preliminary survey results from the Bee Informed Partnership and the Apiary Inspectors of America. That percentage represents a mild improvement, as the second-lowest annual colony loss rate since 2010. An August 2017 survey from the U.S. Department of Agriculture found a 3 percent uptick in overall colonies among beekeepers operating five or more colonies, but a 20 percent decline for those maintaining fewer.

In addition, colony collapse disorder — the phenomenon where bees mysteriously vacate a hive while leaving their queen and food reserves behind — has decreased dramatically in recent years, from accounting for 60 percent of lost winter hives in 2008, to 23 percent in 2017. A more prevalent threat has been the Varroa mite, which was affecting 53 percent of commercial hives, according to the USDA. The use of pesticides, loss of habitats, and climate change are other factors impacting bees.

The loss of honeybees has profound impacts on agriculture. Honeybees alone aid in pollinating a third of all foods consumed in the U.S., such as cherries, berries, apples, almonds, cucumbers, carrots and onions. Bees also pollinate crops like alfalfa, a main part of dairy cow diets, and often attract other pollinators to an area. 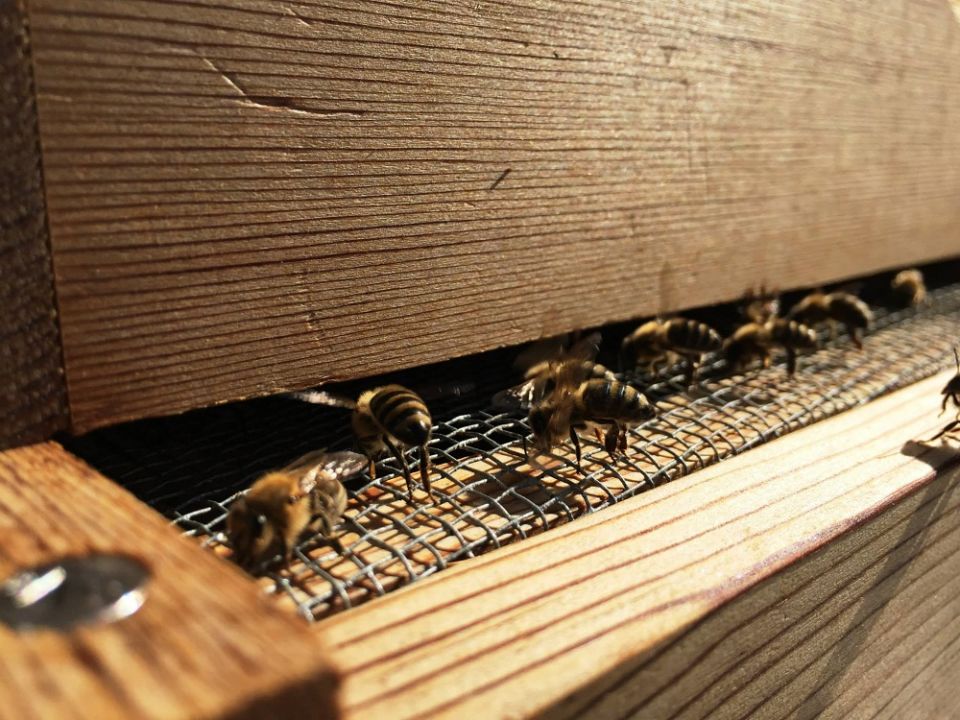 "The bees brought all of life into existence and it's important for us to keep them [alive] to keep diversity and abundance alive," Koenen said.

Through his Milwaukee-based nonprofit BeeVangelists, the bee- and pun-loving Koenen has introduced hives in a variety of locations across the city — schools, retirement communities, downtown buildings — but he sees a unique parallel between bees and religious institutions: "The way that the colony organizes to work together on a single mission to spread abundance or a message to the community to help the community become better." Where a preacher's sermon in a church, temple or mosque might call a religious community to go forth and help those in need, a worker bee performs a "waggle" dance in the hive to identify the nearest source of nectar, he explained.

It was through honeybee hives Koenen had placed on the roof of Redeemer Lutheran Church, which hosts Marquette's Midnight Run meal program, that he recruited the college students as his latest "beeciples." Libby Maddox, a senior nursing student and Midnight Run coordinator, remembers being "mesmerized" by the hives' complexity, as well as Koenen's metaphors about bees and people. A newbie before joining Bee the Change, she now leads in bringing fellow students and the meal program guests together to learn about bees and tend to the hive.

"I've been doing it for a year, and I still feel like there's so much to learn," she said.

A first lesson often focuses on fears people may have about bees: stings.

"Bees defend and wasps attack," Koenen is quick to explain.

Chuck Faulkinberry, one of Gonzaga's beekeepers and director of the John J. Hemmingson Center where its two apiaries are located, described honeybees as among "the most docile creatures in the insect world."

"They have no real care to sting anybody, unless somebody approaches them or aggravates them in some way," he told NCR. "Otherwise, bees are just concerned about collecting pollen and water and making honey."

At both Jesuit universities, the beekeepers, before bringing hives to campus, had to comb through concerns from administration officials about stings and other risks, and implement safety measures, including keeping a bee kit equipped with an EpiPen and working with various campus departments to ensure proper procedures were in place. 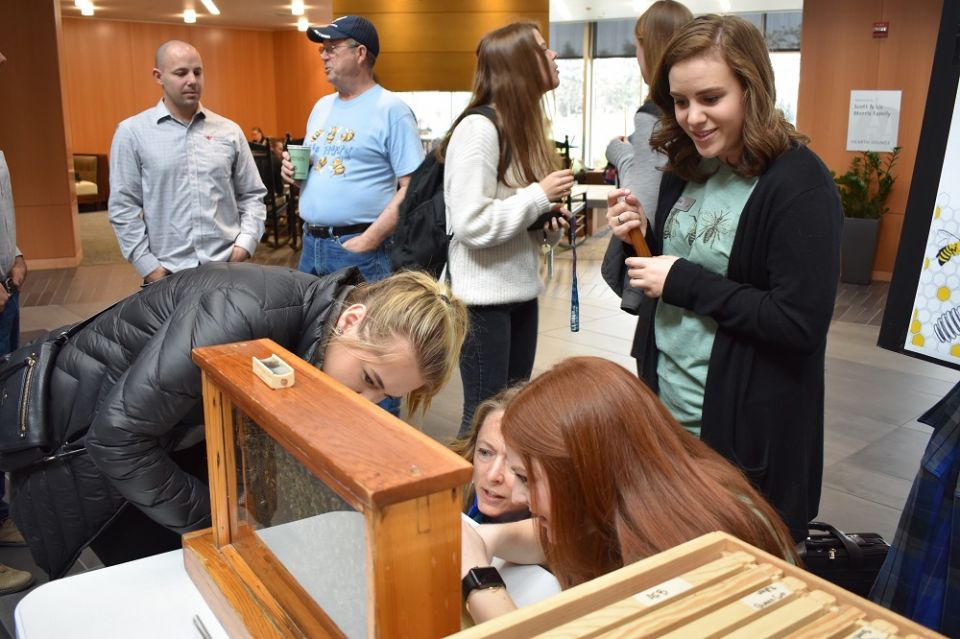 Students at Gonzaga University explore a bee box display at a Bee Informed event on Earth Day 2017 held at the campus' Hemmingson Center, home to two of the school's three apiaries. (Gonzaga University)

No stings have been reported at Gonzaga since its apiaries arrived in 2015 with the opening of the LEED-gold Hemmingson Center — a hive of activity of its own as the new student center. With the apiaries sharing a balcony dining area, the students and bees often mingle freely.

At Marquette, an antiquated style of hive called a top-bar hive allows students and guests of the Bee the Change meal program to hold literally thousands of bees at once without donning protective suits or using smoke. Unlike the more-common Langstroth hive, which stacks the colony vertically in boxes, the top-bar hive spreads it out sideways — viewed as a less disruptive way to enter the hive, essentially the bees' home.

"The result was bees that are calmer and easier to look at and interact with," said Koenen, who added the top-bar hive also better teaches humans "polite beehavior."

Once that's learned, Koenen will often swap in stacked-box hives, which are more conducive to making honey — a frequent request from visitors. The experience of holding a honeycomb with a thousand bees attached, or a drone bee (which lacks a stinger) in their palm, can lead to a paradigm shift in the way people view bees, he said, that bees can be safe. The number of beelievers at Marquette has grown, with a MU Pollinators student club forming, while the campus has explored the possibility of adding more hives. As for Midnight Run, it hopes that through Bee the Change a similar shift can help destigmatize perceptions of its urban surroundings.

"We're constantly talking about popping that Marquette bubble, so making it feel like we're really a part of the neighborhood that we live in," Maddox said.

In a similar way at Gonzaga, the bees have presented a way to make a positive local benefit, in a part of Spokane that lacks the same types of green spaces found on campus. They've discovered how the bees have spread beyond campus boundaries, pollinating the plants of nearby lawns and parks along the way.

"If we don't take advantage of that and do what we can for the rest of the ecology of the area, then I think we're missing out on an opportunity," the student Henson said.

This story appeared in the March 23-April 5, 2018 print issue under the headline: Hive mind .