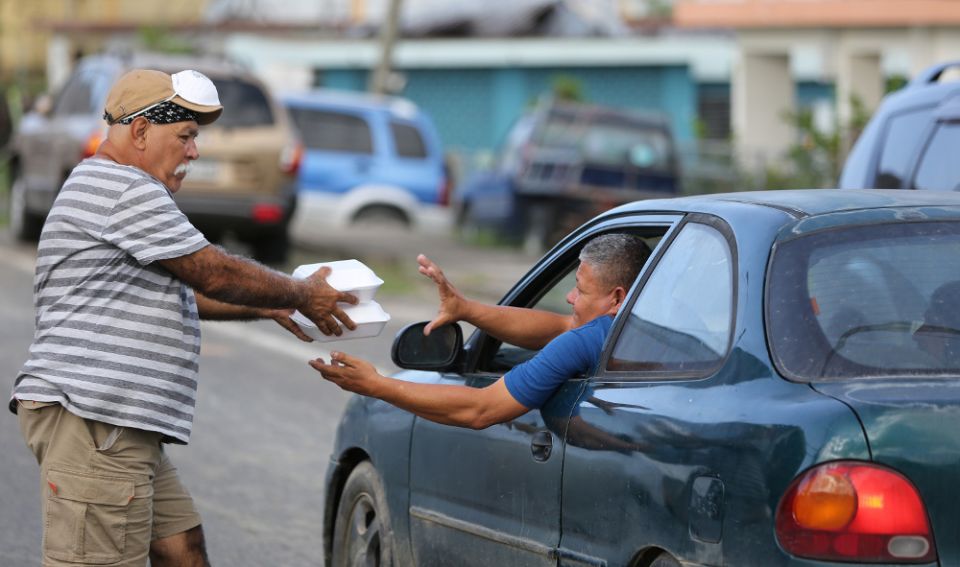 A volunteer hands food to a victim of Hurricane Maria Oct. 21 in Utuato, Puerto Rico. The town has been without power or water for more than a month after the hurricane devastated the island. (CNS/Bob Roller)

QUEBRADILLAS, Puerto Rico — A month after Hurricane Maria devastated Puerto Rico, Catholic organizations, groups and individuals were still among the most prominent responders to the needs of a suffering people.

Despite early logistical obstacles, as of Oct. 20, the local Caritas chapter had disbursed over $1.1 million in aid to an estimated 50,000 people — including food, clothing, first aid supplies, potable water and sundries. At its San Juan office, hot lunches also were being distributed daily to members of the community.

"We had to blindly design a response plan," Fr. Enrique "Kike" Camacho, executive director of Caritas Puerto Rico, told Catholic News Service Oct. 19. "But after communications opened somewhat, we began improving the plan based on diocesan reports. Today, we have a well-coordinated relief system at Puerto Rico's 500 parishes in all six dioceses."

Kim Burgo, senior director of disaster operations for Catholic Charities, told CNS: "One of our biggest challenges is money because there were two other hurricanes before ... but then Maria comes along, which in many ways was worse than Harvey and Irma, and people have donor fatigue and it is very difficult to get donations for Puerto Rico. The need here is so much greater, yet the financial resources are so much less."

Puerto Rico's post-hurricane recovery efforts have been largely a grass-roots impulse, mainly spearheaded by newly formed young adult movements and religious groups that have become an alternative to slow, complex and bureaucratic government procedures. Most of these groups, local and coming from the U.S., include Catholics.

Katherine Riolo, a Catholic volunteer with the Canadian relief foundation Impact Nations, came to Quebradillas, a town of 25,000 residents in northwest Puerto Rico, with a team of four to help distribute 300 portable water filters around isolated homes deep in the mountains. Riolo is a retired schoolteacher and a 30-year missionary veteran who is a member of the Sangre de Cristo Parish in Albuquerque, New Mexico. This was her first disaster-related mission.

"All the devastation ... when you see this, no electricity, families living with no water to bathe in, it's hard and they are traumatized," Riolo told CNS while distributing the water filters around Quebradilla's Guajataca sector Oct. 21. "When you come into someone's house, they don't forget that, and when you tell them, 'God thinks about you so much that he sent us ... and there's a whole lot of people in my town thinking about you,' they don't forget that.."

Asked about what drives her to do missionary work, Riolo simply answered: "We are the hands and feet of Jesus."

Bishop Daniel Fernandez of Arecibo touched on that exact sentiment from Riolo at a Mass at St. Raphael the Archangel Church in Quebradillas Oct. 22, World Mission Sunday.

"The Father sent his son into the world — mission means to send," said Fernandez during his homily. "If sending means mission or mission means send, then Jesus was the first missionary."

Just as the church cannot avoid been missionary, the bishop said, neither can Catholics avoid it. Therefore, he said, offering witness of our faith has to be practiced with good deeds "in times of hurricanes like this one."

Parishes in the inner mountain regions of Puerto Rico have fared the worst after Hurricane Maria. Not only have their congregations' financial support diminished due to massive unemployment, but also federal and local government support is not being received in their towns. Many parishes, like St. Raphael the Archangel, are holding ongoing relief collections for them.

Before Mass, Fernandez told CNS the Diocese of Arecibo is distributing all aid coming from Caritas directly to its 59 parishes. His diocese and the Diocese of Mayaguez are the most damaged of the dioceses. The island has one archdiocese, San Juan, and five dioceses.

"I'm perceiving much unity and even calm within the faithful," said Fernandez. "However, (the priests and I) are attentive because we know that as time passes and, if the situation doesn't improve at an adequate pace, tolerance levels might diminish as the physical exhaustion rises."

Recovery after Hurricane Maria, one of the most destructive in Puerto Rico's history, has been slow. Official reliable statistics about hurricane damage, including an accurate death toll, have been scarce and widely debated by experts.

The latest government timetable for recovery announced Oct. 19 says 90 percent of the island will have its electric power normalized by Dec. 15. That recovery plan is said to yield a totally new and diversified power grid that would bring back hydroelectric systems and add solar power components.

Traditionally a Catholic people, Puerto Ricans feel the church tends to be the most trustworthy source of relief in disaster conditions. For Fr. Kike, that represents one of the church's most important challenges.

"To me the greatest challenge in these situations is to meet our people's expectations" he said. "They expect a lot from the church because they trust it, and there's pressure on us. It's a high standard and we cannot fail."