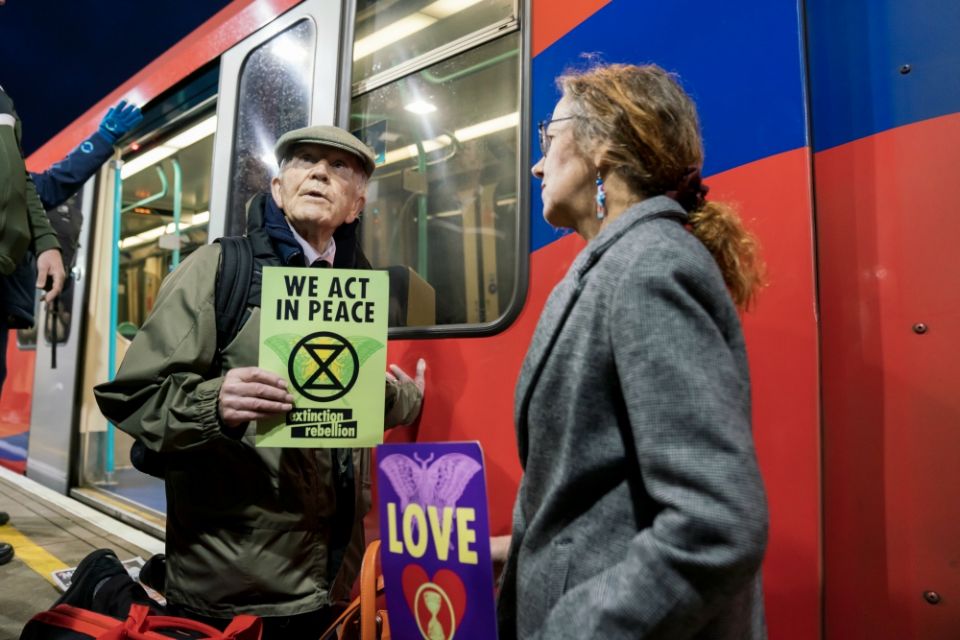 Phil Kingston, 83, a former parole officer, protests climate change after super-gluing himself to the side of a train on the platform at London's Shadwell Station Oct. 17. (Courtesy of Extinction Rebellion/ Vladimir Morozov)

Another protester, 83-year-old Phil Kingston, also of Bristol, a former parole officer who described himself as a Catholic, glued himself to the side of the train.

“I’m a Christian and it really upsets me to see God’s creation being wrecked.”#ExtinctionRebellion @CClimateAction activist Phil Kingston, 83, who has superglued himself to the DLR at Shadwell. This will be his 13th arrest pic.twitter.com/oH57nwAoud

Some of the protesters climbed atop trains at the three stations, while some held the doors and prevented commuters from getting on. Five protesters, including Kingston, were arrested and still remain in custody.

In a statement to The Tablet, Newell said his actions were an attempt to draw attention to "climate and environmental emergency."

The train lines chosen by the activists feed commuters into London's financial sector. "The protesters were trying to draw attention to the fact that a lot of people, possibly going to work, were participants in an industry which is heavily implicated in fossil fuels," said Mark Dowd, a member of both Christian Climate Action and Extinction Rebellion. "The principal aim was not to inconvenience families and people with children."

Addressing the involvement of clergy in civil disobedience, Dowd, a former Dominican friar, traced the moral justification to St. Augustine's City of God.

"There is such a thing as the law of the state, and there are higher laws and moral precepts," he said in a telephone interview from Manchester, England. "Very rarely, but occasionally, people in their conscience feel there is a higher law they are operating under."

Dowd also credits the teachings of Pope Francis for more people of faith — lay as well as clergy — participating in civil disobedience. "He's not called for people to break the law or be disobedient," Dowd said. "But a lot of his comments have asked people to be prophetic and to risk popularity and to go against the grain. There is a lot in Francis' rhetoric and language that these [religious] people look to as being quite supportive."

In his statement to The Tablet, Newell said: "Pope Francis has called us to care for our common home, to protect the Earth which is our Mother and our neighbour who [is] among those most abused and neglected. We cannot walk by on the other side." 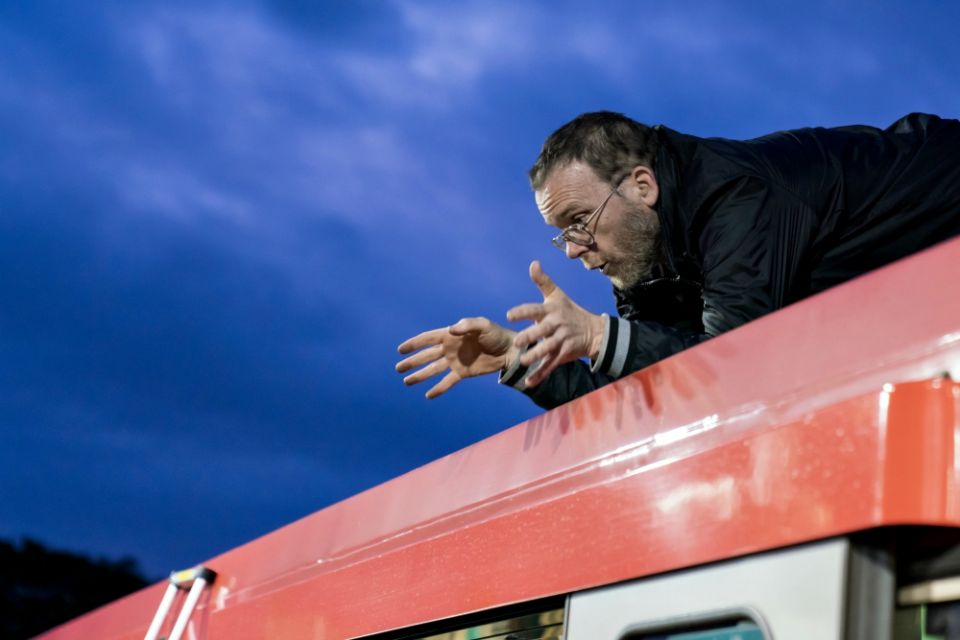 Dowd said that the protesters' civil disobedience has divided many in Extinction Rebellion, with a large number of members saying they oppose the action.

At Canning Town Station in East London, the protest turned violent when commuters scuffled with a demonstrator atop the train. Infuriated by the delay, commuters dragged the activist off the roof of the train, and soon an angry mob set upon him. The situation was brought under control after the station staff and other passengers intervened.

In a statement released on its website, the group expressed sadness over the escalation to violence at Canning Town Station.

"In light of today's events, Extinction Rebellion will be looking at ways to bring people together rather than create an unnecessary division," read the statement. "The people involved do not take this action lightly. They were a grandfather, an ex-buddhist teacher, a vicar and a former GP among others who acted out of rational fear for the future as this crisis deepens."

In the past few months, members of different parts of religious life have lent their support to Extinction Rebellion and Christian Climate Action, including the former archbishop of Canterbury, Rowan Williams.

"He is a very mild-mannered man," Dowd said. "I think he's got to the point, like many people have, where the traditional democratic channels of protest, like marches, etc., don't work. Civil disobedience has now become a preferred action."

The protesters "are talking about the gift of nature God gave us in the Book of Genesis. That is what is at stake here."

Dowd said that clergy have come to understand that unless there is a shakeup, there won't be any change. He said they also draw inspiration from such historical figures as Rosa Parks and Mahatma Gandhi. "But these people are talking about the whole of nature, and the whole of civilization."

"Carbon, for Catholics, has become the new sex," he added. "They are guilty about their carbon footprint now. If St. Augustine were living today, he would say, 'Oh God, make me carbon neutral, but not just yet.' "