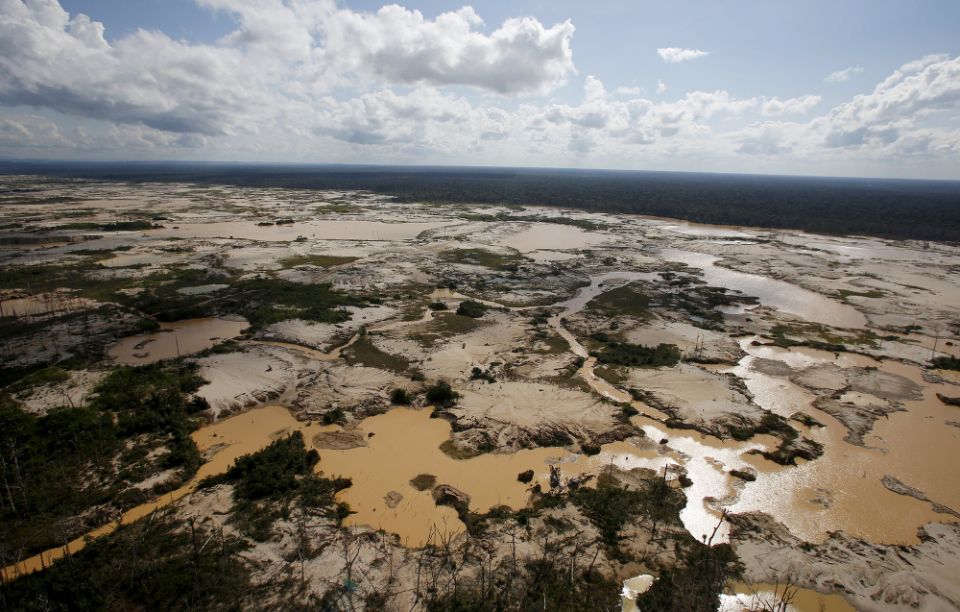 An area deforested by illegal gold mining is seen in a zone known as Mega 14, in the southern Amazon region of Madre de Dios, Peru. (CNS/Reuters/Janine Costa)

Washington — The importance of the Amazon basin to the entire earth's ecosystem was stressed by Mauricio López Oropeza, executive secretary of the Pan-Amazonian Ecclesial Network, known by its Spanish acronym of REPAM, who addressed solidarity in our common home at the Feb. 4 morning plenary session at the Catholic Social Ministry Gathering in Washington, D.C.

López shared the stage with a Brazilian indigenous leader from the Kanamari Tribe and the regional assistant coordinator of integral human development for REPAM.

Efforts by the Catholic Church to forge local and regional coalitions in Latin America focused on protecting the environment are vital in a region under increasing assault by government and corporate interests, they said. The "bottom up" approach of REPAM — listening to indigenous people and local farmers on their needs and solutions — is a source of hope, panelists said.

Korá, the indigenous leader, sang a powerful song of the wisdom of the air and water, decrying the government for exploiting the land's riches at the expense of farmers and indigenous peoples. Land is being confiscated, rivers are drying up and the local people can no longer hold some of their traditional feasts because there are no fish, he said. The people suffer more sicknesses and diseases because of pollution,

"I am the forest," he said. "I am here today because without it, the world doesn't live."

The government "is against indigenous people — we need your help," he said.

Haszel Dallana Contreras, of REPAM, praised Colombia's farmers for resisting deforestation and government attacks. The war on cocaine used herbicides that also killed other crops and left the land barren, she said. People suffered skin diseases and other ill effects from the poisons.

While the country now operates in a more peaceful atmosphere, there needs to be effective mechanisms for farmers to make their claims known, she said. They are being dislodged from their land to make way for agro-business palm oil plantations. Such mono-agricultural approaches harm the land and instead, what is needed are local farmers growing a variety of crops.

Calling the future of the planet "an ethical problem" and quoting Pope Francis, who has called the Amazon and Congo Basins the lungs of the planet, López made clear that the church's social teaching is very clear on the imperative to care for the earth.

The plenary segued into a panel discussion that brought in viewpoints from Africa and the Cherokee Nation of South Carolina, whose chief, Mary Louise Worthy, quipped the session's other most memorable line, citing fracking as the cause of more earthquakes and other effects. "Sink holes are Mother Earth telling you to stop it," she said.