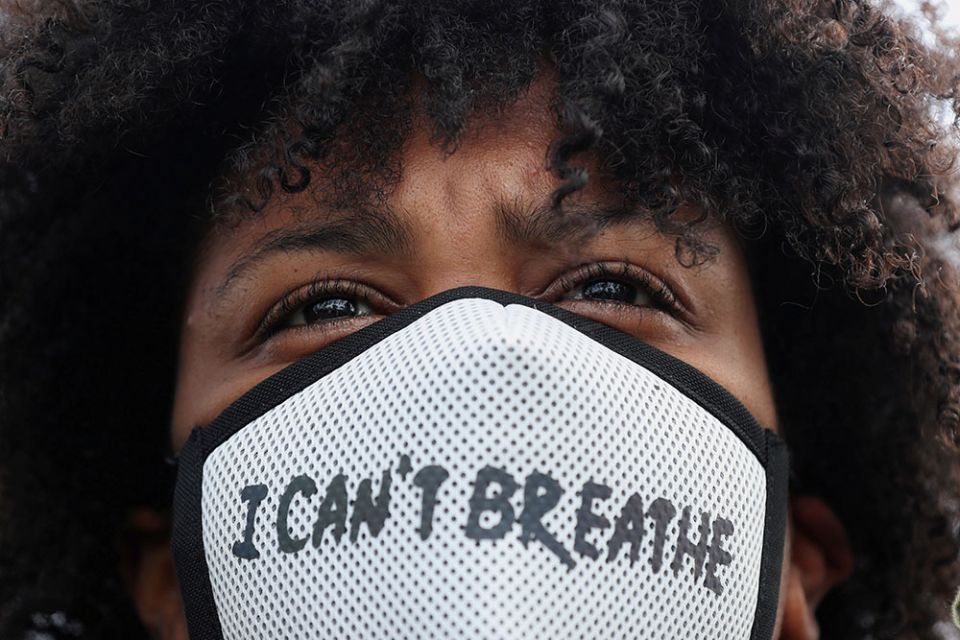 A demonstrator wearing a protective mask takes part in a protest in Rotterdam, Netherlands, June 3, 2020, following the death of George Floyd. (CNS/Reuters/Eva Plevier)

The ways pollution, health, climate change and racism blur together were in sharp focus last week during Loyola University Chicago's conference on climate.

"The pope clearly says some forms of pollution are part of people's daily experience, and they're constantly being exposed to atmospheric pollution, pollution of the water, pollution of soil, but it all yields these health impacts," said Sylvia Hood Washington, an environmental epidemiologist and historian, referencing Pope Francis' 2015 encyclical Laudato Si'. "So that is the goal of fighting against environmental racism, because these communities have found that they are not in a resilient space. They are not living in an environment where their bodies are being protected."

"This is a right-to-life issue," she said.

The Loyola climate conference featured a range of speakers, from scientists with the Centers for Disease Control and Natural Resources Defense Council (NRDC), to environmental justice advocates and climate activists, to young Black entrepreneurs, to the governor of Illinois, J.B. Pritzker. 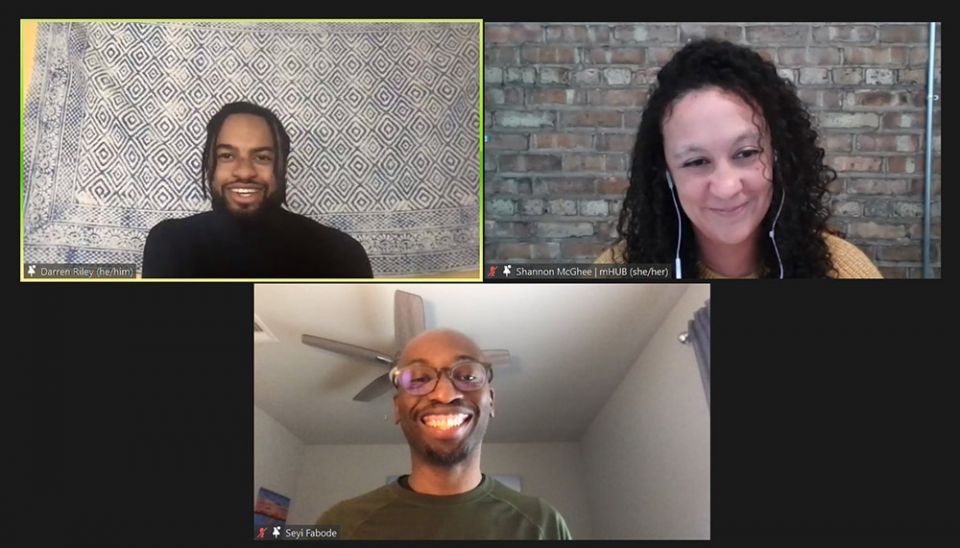 Darren Riley, co-founder of JustAir Solutions, and Seyi Fabode, co-founder of Varuna Tech, talk with Shannon McGhee of mHub Chicago about their work to bring about clean air and water in underserved communities during a panel discussion March 17 as part of the Loyola University Chicago climate change conference. (NCR screenshot)

Loyola Chicago has held the climate change conference most years since 2014. Hosted by its School for Environmental Sustainability, the conference in past years has focused on themes like the economics of climate change and youth activists, and welcomed speakers such as former EPA administrator Gina McCarthy, who now serves as the White House's point person for domestic climate policy.

The 2022 conference was the second in a row Loyola Chicago held virtually, after the COVID-19 pandemic canceled the March 2020 gathering just as it was about to start.

This year, the conference placed its spotlight on environmental justice and unequal climate implications on public health.

Disproportionate impacts on health and wellness

As climate change leads to warmer temperatures and more frequent intense storms, it also impacts the way that certain vector-borne diseases are transmitted, according to the CDC. In the U.S., reported cases of diseases contracted from mosquitoes, ticks and fleas, such as Lyme Disease and West Nile Virus, doubled from 2004 to 2019, a period that has included the 10 hottest years globally on record.

But the rise in rapidly spreading diseases cannot be attributed solely to climate change, said Ben Beard, deputy director of CDC's vector-borne diseases division during a panel March 14. Instead, climate change combines with other factors such as deforestation, changing land use patterns and global migration, which is also expected to increase as temperatures continue to rise.

"Climate change is not driving this in a vacuum without all these other factors that are going on at the same time," he said.

Beard added that under direction of the Biden administration, the CDC has developed a climate and health taskforce to develop research and surveillance tactics for diseases and also address equity issues for people most at risk.

"Climate change has wide-ranging health effects, and an integrated understanding of climate, ecology and epidemiology is critical for predicting and averting epidemics of infectious diseases," Beard said.

But disease transmission is only one way that climate change is impacting health. Heat is, too.

Related: Do no harm: Catholic hospitals confront their own carbon footprints

"It's unfortunately not just an inconvenience. Heat can and does kill people," said Kim Knowlton, a senior scientist with NRDC and environmental health sciences professor at Columbia University who has spent years connecting the dots between climate and health.

In the U.S., an estimated 5,600 deaths and 65,000 emergency room visits each year attributed to extreme heat, numbers that are expected to rise as record-hot days increase and heat waves last longer. In addition, more frequent and larger wildfires lead to numerous respiratory illnesses as the smoke causes decreases in air quality.

Health impacts of climate change, whether from rising heat, air pollution or increased flooding, are not evenly felt across states or communities.

"There are communities in our country [and] around the world who are going to be differentially burdened and more exposed and be more in harm's way," Knowlton said.

Throughout the conference, several panelists referred to a recent study that found historically redlined communities in the U.S. — where majorities of people of color and immigrants lived that were deemed high risk for loans and where polluting industries were regularly located — are far more likely today to breathe dirtier air, even 50 years after the practice was barred.

David Lammy, a Labour member of Parliament in the United Kingdom, said during a March 15 panel that similar situations exist in his home city of London, and the disparities of environmental injustice are illustrated worldwide by maps showing the majority of greenhouse gas emissions generated by countries in the global north, while nations most vulnerable to the impacts of climate change are in the global south.

David Lammy, a member of Parliament for Tottenham in the United Kingdom, discusses a recent study that examined higher levels of air pollution in discriminated U.S. communities under redlining March 15 during the Loyola University Chicago climate change conference. (NCR screenshot)

"Let's be clear, these are not random events. The hardships felt by these communities are a consequence, a symptom of decades of inequality in our societies, exposing those on the margins to the hardest conditions and their fates sealed from birth. And we've yet to see the worst of it," he said.

"Ultimately, we cannot remain colorblind in our response to the climate crisis. If we do, we fail billions on the planet who have done the least to deserve that fate," he added.

One of those communities, Altgeld Gardens, sits roughly 30 miles south of Loyola Chicago. Cheryl Johnson, executive director of People for Community Recovery (PCR), spoke about the "toxic doughnut" — a term coined by her mother, Hazel, who's often called the "mother of environmental justice — that surrounds Altgeld with numerous chemical and industrial plants.

A March 18 webinar highlighted much of the work that PCR has done for decades to combat environmental health hazards in their south Chicago neighborhood.

"The pollution that happens in my neighborhood, it just don't stay here — it affects everybody. And are we going to make the choice that we want to breathe clean air, or are we going to continue to breathe dirty air? We have to do that collectively as a group," Johnson said.

Hood Washington said it is the right-to-life dimension that connects the Catholic Church to pushing for environmental justice. In the early 2000s, she worked with the U.S. Conference of Catholic Bishops to develop a film on environmental justice to share with Black Catholics; Loyola's Hank Center for Catholic Intellectual Heritage is working to make the film more widely available.

Chanelle Robinson, a theology doctoral student at Boston College, added that Francis has reminded the world "how marginalized communities, especially the poor, experience disenfranchisement alongside the Earth."

The interconnections across health, climate and race were evident not just in the panel discussions but also in the institutions guiding them. Joining the School of Environmental Sustainability in hosting were other Loyola programs, including the Parkinson School of Health Sciences and Public Health, the Center for Urban Research and Learning, the School of Social Work and the Institute for Racial Justice.

The conference also looked at ways governments and communities are working to address climate change and the inequities it raises.

One response in Illinois has been the Climate and Equitable Jobs Act, which the state legislature passed and the governor signed into law in September. The legislation sets goals for the state to use 100% renewable energy by 2050 and reach net-zero emissions in its power sector five years earlier, and it provides funding and resources to help low-income and disadvantaged communities benefit from the clean energy economy.

"We took on a monumental battle to reduce carbon admissions, to remove harmful pollutants from the air, massively expand our investment in renewable energy, retrain workers for the green jobs of the future, and anchor it all in the values of ethics and equity and consumer protections," Pritzker said.

Key to the legislation is that it includes equity throughout, not just as an add-on. That was a direct result from the work of communities, labor groups and environmental advocates across Illinois who engaged the process.

"We decided early on that equity was going to be at the center of this bill, and it's literally baked in throughout," said Delmar Gillus, chief operating officer for Chicago-based Elevate Energy.

That the state was able to pass such a major climate bill in the midst of a pandemic was also a notable achievement, added Jennifer Walling, executive director of the Illinois Environmental Council.

Lammy said a major lesson from the pandemic "is the ability of the global community to mobilize when it wants to" in the face of a major threat. He too stressed that no single country or societal sector alone can address climate change, and that it is paramount to include Indigenous groups, Black and brown people, and those on the frontlines in decisions about how the world can overcome them.