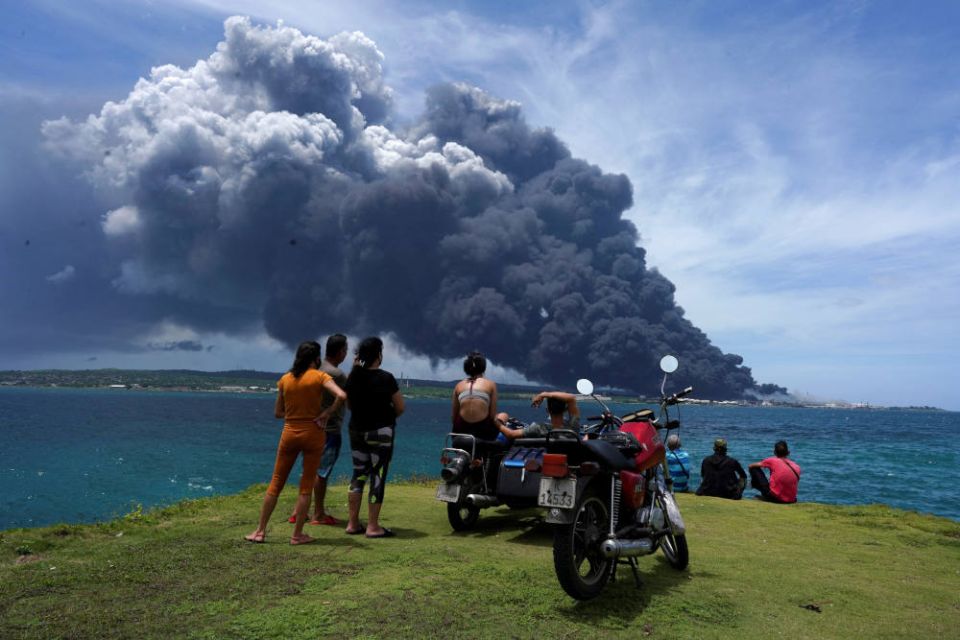 People watch as smoke billows over a large oil storage facility that exploded near Cuba's supertanker port in Matanzas Aug. 8, 2022. The deadly fire is threatening to plunge the island into a deeper energy crisis as it forced officials to shut down a key thermoelectric plant. (CNS photo/Alexandre Meneghini, Reuters)

Washington, D.C. — Cuban bishops and Pope Francis asked for prayers as a major fire has caused at least one death, more than 100 injuries and left 17 firefighters missing in Cuba.

The fire initially began with a lightning strike that hit a tank at an oil facility Aug. 5 and has since spread along the port city of Matanzas. Thousands were evacuated from the region as the fire spread from one tank to three. Some feared wind was spreading the contamination to other parts of the island, including to the capital, Havana, about 60 miles away.

"Let us pray with confidence in God (without anguish) and let us do it for those who, in one way or another, are suffering in our midst," Bishop Emilio Aranguren Echeverria of Holguín, president of the bishops' conference, wrote in a letter published Aug. 6. "It is a time when, as the people of God ... we must put prayers of intercession into practice."

Francis, in a telegram sent to the Cuban bishops via Cardinal Pietro Parolin, Vatican secretary of state, said he was following news about the "unfortunate accident."

"May the Lord grant you strength in this moment of pain and sustain the work of extinction (of flames) and (of) search and rescue," the telegram said.

The Cuban government said via Twitter Aug. 8 the air quality was being monitored, and it asked citizens to use masks if going outside. Gov. Mario Sabines Lorenzo of Matanzas said in video posted on Twitter the initial fire spread to a second tank, which, like an Olympic torch, ignited a third tank, which later collapsed.

The fire is producing a lot of smoke, he said, and the situation is complex.

Mexico and Venezuela stepped in to help the island-nation battle the blaze. The U.S. Embassy in Cuba said in an Aug. 8 tweet it was "carefully monitoring the situation in Matanzas and is standing by in case Cuba requires humanitarian or technical assistance from the United States."